Vasyl Lomachenko vs. Jose Pedraza official for December 8 on ESPN 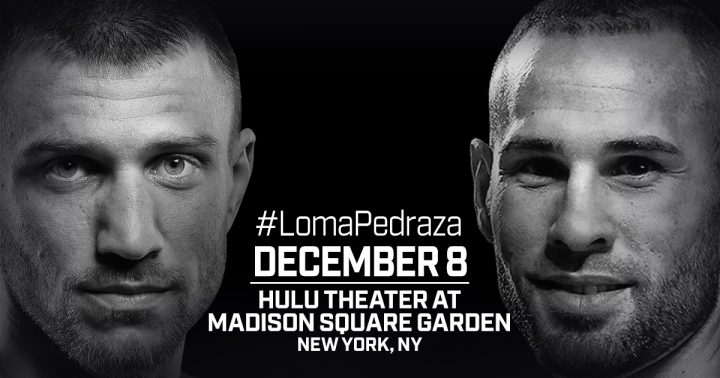 By Chris Williams: Vasyl Lomachenko will meet up with fellow Top Rank fighter Jose ‘Sniper’ Pedraza in the headline attraction on December 8 on ESPN and ESPN Depores from Madison Square Garden in New York. WBA lightweight champion Lomachenko (11-1, 9 KOs) and WBO 135 pound champion Pedraza (25-1, 12 KOs) will be battling it out in a unification fight. The Lomachenko vs. Pedraza card kicks off at 9:00 p.m. ET/6:00 p.m. PT on Dec.8.

This fight probably won’t do much in raising Lomachenko’s status in the boxing world. Pedraza isn’t a good enough fighter to make Lomachenko a bigger name. The fight is a considerable step down for Lomachenko from his previous fight against former World Boxing Associaion lightweight champion Jorge Linares on May 12, who he stopped in the 10th round.

Pedraza won the WBO lightweight title in his 12 round unanimous decision win over Raymundo Beltran on August 25. It was a good win for the 29-year-old Pedraza, but he was facing an older fighter in 37-year-old Beltran. This wasn’t Mikey Garcia that Pedraza had to fight to win the WBO title. This was an older fighter from the same Top Rank stable. You can argue that the only reason Beltran was a world champion is because he fought 40-year-old Paulus Moses to win the vacant WBO lightweigh title last February in winning a 12 round unanimous decision. If Beltran had to face Mikey Garcia or Robert Easter Jr., he likely would have lost to them both.

“I am ready to fight an excellent opponent like Jose Pedraza,” Lomachenko said. “My goal has always been to unify the titles, and Pedraza is standing in my way. There is something special about fighting in New York City and at Madison Square Garden. The fans in New York City are true boxing fans, and I can’t wait to put on another spectacular performance for them.”

The winner of the fight will be the new WBA/WBO lightweight champion. However, it doesn’t mean that the winner will be able to necessarily unify the division entirely. IBF/WBC champion Mikey Garcia isn’t showing interest in facing Lomachenko or Pedraza. If Garcia vacates or has his IBF and WBA titles stripped from him, whoever wins those belts will need to want to take on the Lomachenko-Pedraza winner, and it’s debatable whether they would. Lomachenko is fighting at such a high level, it doesn’t make sense for Garcia or the other fighters to face him. Lomachenko isn’t a PPV star, so the money they would get fighting him wouldn’t be life changing.

Lomachenko-Pedraza might bring in more viewers on December 8, because the fight will come on after the 84th Annual Heisman Memorial Trophy Presentation on ESPN. There will be a big audience initially. Whether the football fans will stick around to stay and watch long enough to see the Lomachenko vs. Pedraza fight in the headline fight is unknown. It may depend on who Top Rank has on the undercard. If they have some interesting fights, then maybe the casual boxing fans will stay long enough to see Lomachenko vs. Pedraza.

The two time Olympic gold medalist Lomachenko has fought some exciting fighters in the past at the pro level in his fights against Orlando Salido, Gary Russell Jr., Roman ‘Rocky’ Martinez, Jason Sosa, Guillermo Rigondeaux, Jorge Linares and Nicholas Walters. Salido beat Lomachenko. After that fight, Lomachenko improved and he’s been a lot better in using mobility and high volume punching to win his fights.

Lomachenko stopped the 37-year-old Rigondeaux last year in December. The reason why Lomachenko didn’t get more credit for the win is because he didn’t agree to fight Rigondeaux at a catch-weight. The Cuban fighter had to move up two weight divisions to fight Lomachenko. The weight was too much for Rigondeaux. You can argue it would be the same thing for Lomachenko if he had to move up two weight classes to fight light welterweight Regis Prograis. The power and the size of Prograis would be a nightmare for Lomachenko, and he likely would wind up on the canvas multiple times before the fight was stopped.

Rigondeaux didn’t have the size or the power to compete against the younger, bigger and stronger Lomachenko. It’s going to be hard for Lomachenko to become a star in boxing if he’s insistent on having things in his favor. It’s not always going to be that way. If Lomachenko can’t fight Manny Pacquiao without a catch-weight, then he probably won’t get the fight at all. Likewise, if Lomachenko insists on having advantages in negotiations with other fighters, he’s going to be stuck fighting less popular fighters like Pedraza and unable to get the more interesting guys like Gervonta ‘Tank’ Davis and Mikey Garcia to fight him.

“Boxing fans are excited that Vasiliy Lomachenko will be back in action on Dec. 8,” said Top Rank boss Bob Arum. “He knows that in WBO champion Jose Pedraza, he faces a tough opponent with a style that may give him a lot of trouble.”

Lomachenko needs to move up to 140, because there’s only so much he can do fighting at 135. Few boxing fans care about Lomachenko’s fight against Pedraza. After Lomachenko beats Pedraza, he might be stuck fighting opposition that the U.S casual boxing fans have never heard of before. It’s doubtful that Top Rank will be able to get Mikey Garcia to fight Lomachenko. For Lomachenko to keep his career moving upward, he needs to take some risks by moving up to 140 and fight the top fighters in that weight class. Lomachenko would really need to show great boxing skills to beat Regis Progrois, Josh Taylor, Adrien Broner, Kiryl Relikh, Ivan Baranchyk, Maurice Hooker, Alex Saucedo and Jose Ramirez. Lomachenko might be able to beat some of those guys, but he’s going to know he was in a fight. Lomachenko will take punishment like he never took before in facing those fighters. But the only way for Lomachenko to continue his stratospheric rise in boxing is for him to move up to light welterweight and take on guys where he’s not guaranteed a win like he is now a 135. The lightweight division is going to be empty once Mikey Garcia moves up in weight. The fans don’t want to see Lomachenko fight Jorge Linares again, and the rest of the guys are too obscure for fans to care about. Lomachenko has to move up to 140 in my estimation if he wants to realize his potential. Of course, if Lomachenko doesn’t have the nerve to move up to light welterweight, then he’ll need to be satisfied with a stunted career fighting the limited talent in the 135 pound weight class.