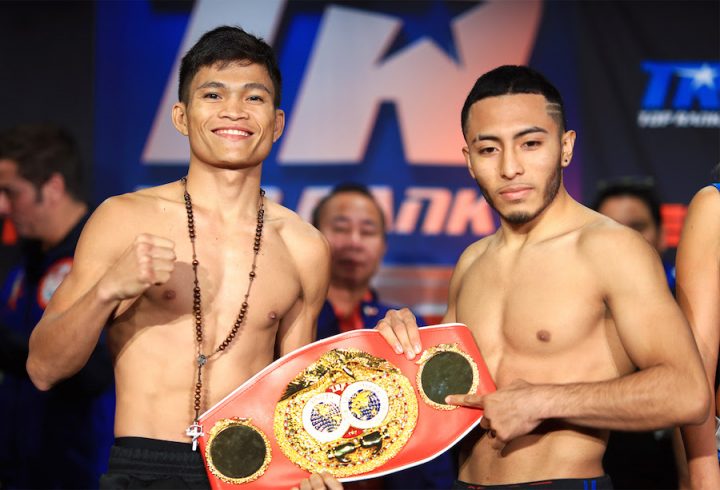 By Mike Smith: Jose Uzcategui and Jrwin Ancajas were on weight on Thursday for their fights this Friday night against Ezequiel Maderna and Alejandro Santiago Barrios at the Oracle Arena in Oakland California. Uzcategui-Maderna and Ancajas-Santiago will be streamed on ESPN+ at 7:30 p.m. ET/4:30 p.m. PT.

This is a nice showcase fight for the 27-year-old Uzcategui. He won’t be defending his International Boxing Federation super middleweight title he won last March in stopping Andre Dirrell in the 8th round. It’s more of a stay busy fight for Uzcategui to get him some rounds in, as his originally scheduled opponent Caleb Plant suffered an injury during training, and thus was unable to take the fight. So instead of Uzcategui canceling the September 28 date altogether, he chose to facing the 31-year-old Maderna in a non-title defense.

The Argentinian Maderna has won his last two fights against Martin Fidel Rios and Jorge Daniel Caraballo. Maderna lost to Martin Rios in his first fight against him in February 2017. That was a close defeat by Maderna. However, his loss to Artur Beterbiev in 2016 was anything but close in getting stopped in the fourth round. Beterbiev effortlessly defeated Maderna in dropping him twice in round 3 and 4 of the fight.

IBF super flyweight champion Jerwin ‘Pretty Boy’ Ancajas (30-1-1, 20 KOs) weighed in at 114.2 pounds for his title defense against #14 IBF Alejandro Santiago Barrios (16-2-4, 7 KOs). For his part, Barrios weighed in at 114.6 pounds. This is a fight scheduled for 12 rounds. Ancajas, 26, will be making his sixth defense of his IBF 115 pound title he won in 2016. Ancajas hasn’t fought anyone good yet since he won the IBF title, and you’ll still be able to say that after Friday. This is going to be another soft defense for Ancajas. Top Rank needs to take the training wheels off Ancajas and match him against the other top fighters in the 115 pound weight class.