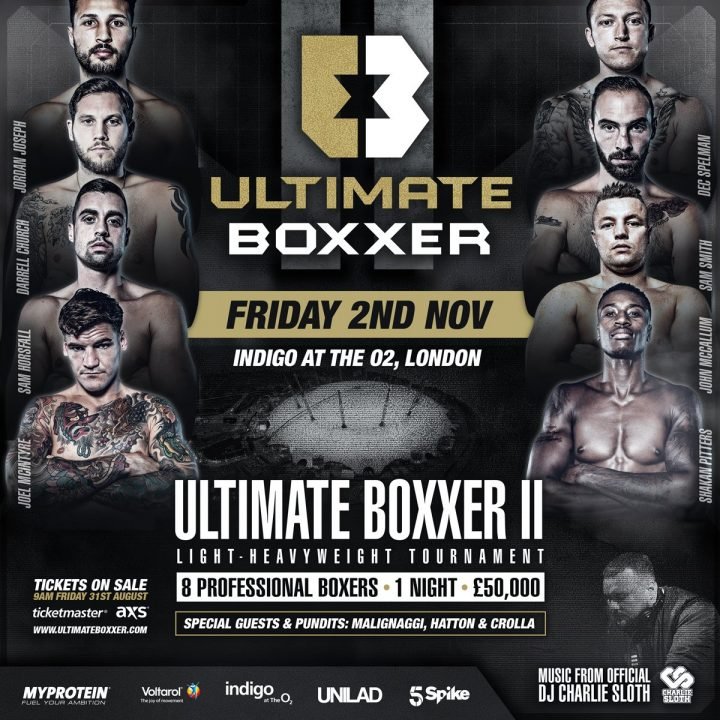 By Ian Aldous: On Friday November 2nd, Ultimate Boxxer returns for the second instalment of its short-form one-night tournament from the Indigo at the O2 Arena in London, live on UNILAD via Facebook and 5Spike on UK TV. In April, it made its debut as eight welterweights battled over three, three-minute rounds to win the £50,000 prize money and ‘golden robe’ bestowed upon winner, Drew Brown, by none other than British boxing legend and Ultimate Boxxer ambassador, Ricky Hatton.

This time, the spotlight turns to the 175lbs division as eight light-heavyweight pros look to rise above seven of their equivalents and become a legitimate force on the British scene. It’s a fantastic platform for fighters who aren’t used to getting too much television exposure, if any at all. Here are the competitors in order of their current ranking on boxrec:

They’ll enter the proverbial gladiatorial arena to see who can win what will be a career-high payday of £50,000. It’s a massive reward at this level of the sport and a huge incentive for the boxers to give every fibre of their being on the night to become victorious. There’s no boxing politics to be had here, and no avoiding opponents. Former world champions, Ricky Hatton, Anthony Crolla and Paulie Malignaggi are ambassadors for Ultimate Boxxer and undoubtedly help give name value to this blossoming brand.

If the first tournament in April was anything to go by, then it wasn’t a night of opponents sitting at range and poking out a jab for three, three-minute rounds. Two of the seven fights ended by stoppage and all the bouts were competitive and saw more positive tactics than negative. It’s similar to the Prizefighter series formerly promoted by Matchroom Boxing. Those tournaments saw multiple winners go on to win, not only domestic titles, but world titles as well, including Rocky Fielding, Lee Haskins and Terry Flanagan. The possibilities are endless for whoever shines brightest on November 2nd.

Undefeated prospect and my pick to win the tournament, Shakan Pitters, told me it was an easy decision to take on the challenge of a potential three fights in one night. “Very easy, you know what I mean?” he said. “I wouldn’t say the money’s life-changing, but it can obviously support my career and help me move forward in the right direction. I’m a great boxer, a great fighter. I’m not just saying it – I know I can definitely win.”

Despite his 6’6″ height and giant frame for a light-heavyweight (he’ll be dropping down from cruiserweight), he believes that he won’t become reliant on using his range. “No, I already know a lot of their game plans. They’re not gonna outbox me – that’s for sure. They’ll try and get on the inside, try and make it rough and tough. It’s something I’m prepared for. I can work on the inside too. I’m not one of these tall guys who can’t work on the inside. I can work inside happily or keep it at range – I can adapt.”

In his last outing, Pitters had the opportunity to fight on the big stage of the Amir Khan/Samuel Vargas undercard in his home town of Birmingham. “It was a great experience and I won by second-round KO against a guy who’s actually taller than me in front of my home crowd.” His opponent, Imantas Davidaitis, stood at 6’8″.

Having only turned pro around eighteen months ago, it may benefit the twenty-nine year-old that he’s been regularly fighting in four-rounders, with November 2nd being three-round bouts. “Although everyone can see I mainly do four (rounders), they’re what’s been available to me in a sense where big shows have come along, like the Amir Khan bill, and only the four-rounder was available. My preparation’s been fairly similar and I’m raring to go.”

Ultimate Boxxer 2 should provide opportunities going forward for the overall winner and Pitters is in confident mood. “For the winner, which is gonna be myself” he proclaimed. “It’s gonna open doors and it should allow a window of opportunity. People will know you a bit more because Ultimate Boxxer, from myself being there, was an amazing show, it was a great atmosphere. You had Chris Eubank Sr. turn out and that can attract a lot of interest from a lot of high-profile people, and I believe with it located in London now, it’s gonna attract even more.”

Birmingham’s top 175lbs prospect finished our conversation by telling me what to expect from him on November 2nd. “Excitement, (and) a brilliant boxing display. I always show up, if I can take someone out, trust me, I’ll take them out. I look forward to seeing everyone and putting on a great show on November 2nd.”

He even started planning for life after the tournament is complete.”You can interview me after, once I’ve won!”

Founded on a desire to make the professional game more accessible for boxers and fans alike, Ultimate Boxxer II will be aired live on Freeview with Channel 5 Spike from 10pm and on Facebook with UNILAD from 8.45pm. Expect some very special guests and live music from BBC Radio 1 Xtra’s Charlie Sloth. Boxing legends Paulie Malignaggi, Ricky Hatton and Anthony Crolla will play their part in a star studded team that also included Chris Eubank Snr last time out. Also, on the undercard, star of TV’s Love Island, Idris Virgo (2-0), makes his return to the ring.

ULTIMATE BOXXER II will take place at Indigo at The O2 on Friday 2nd November 2018. Go to www.ultimateboxxer.com for further information.

Tickets are on sale now.