Tyson Fury: I’m about to win the WBC heavyweight title 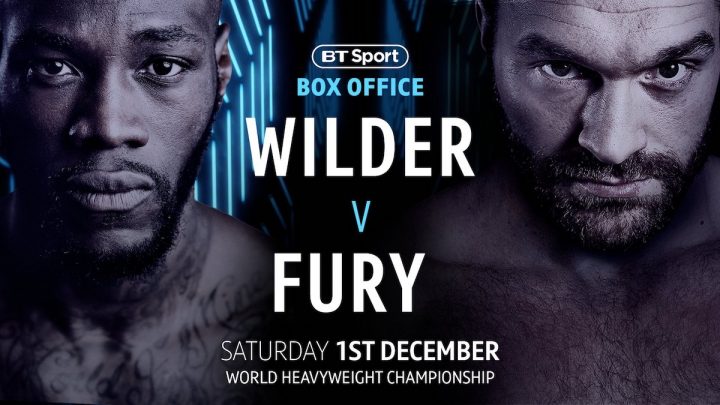 By Scott Gilfoid: Tyson Fury was dreaming today in predicting himself winning the WBC heavyweight title in beating undefeated champion Deontay ‘Bronze Bomber’ Wilder in their fight on December 1 on Showtime pay-per-view at the Staples Center in Los Angeles, California.

Fury has dropped close to 150 pounds to get down from close to 400 pounds to arrive at the 250+ lbs. that he’s currently at as he prepare for his big mega-fight against the 6’7” Wilder. Fury gloats about how he’s proven his critics wrong in losing the weight for his “fairytale” comeback, and now he’s about to fight for a world title against arguably the best heavyweight on the planet in 32-year-old Deontay at the Staples Center.

My fairytale comeback nobody thought I could get the weight off never mind get back in the ring! 6 months after my first comeback fight I’m about to win the @WBCBoxing all because @BronzeBomber said I couldn’t do it. U MADE ME DO THIS YOU BIG DOSSER.

I think it’s safe to say that Fury is about to be bombarded in a serious way by Deontay on December 1. If this fight goes even three rounds, I think it’ll be a miracle.

The problem that Fury, 29, may have against Wilder compared to in his storybook win over former heavyweight world champion Wladimir Klitschko in 2015 is that he’s going to have punches thrown at him this time. Wladimir looked absolutely lost inside the ring against Fury. A combination of fear and confusion froze Wladimir, causing him to refuse to throw punches. If Wladimir had thrown 10 punches with actual conviction in each round against Fury, he clearly would have beaten him with ease.

Wladimir defeated himself on the night by not even trying. With his fearlessness and his surety of mind, Wilder isn’t going to do that. Deonay is going to be attacking Fury all night for as long as their fight lasts on December 1. You won’t see Wilder coming back to his corner asking his trainer what he needs to do for him to beat Fury.

Wilder will be on cruise control against Fury looking to take his head off with every shot he throws in the fight. Fury is going to have to be ready to run in this fight for 12 rounds, because if he stops for any length of time, he’s going to be at risk of being knocked out by one of Wilder’s right hand salvos. Fury is going to be trying to make Wilder miss all night, but it only takes one shot from ‘The Bronze Bomber’ for him to knockout his opponents.

Fury doesn’t have any punching power to speak of to hold Wilder off of him. That’s the problem. Fury was just extended the full 10 rounds against the light hitting Francesco Pianeta last August in Belfast. Before that, Fury struggled to beat 5’9” former cruiserweight Sefer Seferi. Both of those performances showed that Fury isn’t ready for a talent like Wilder.