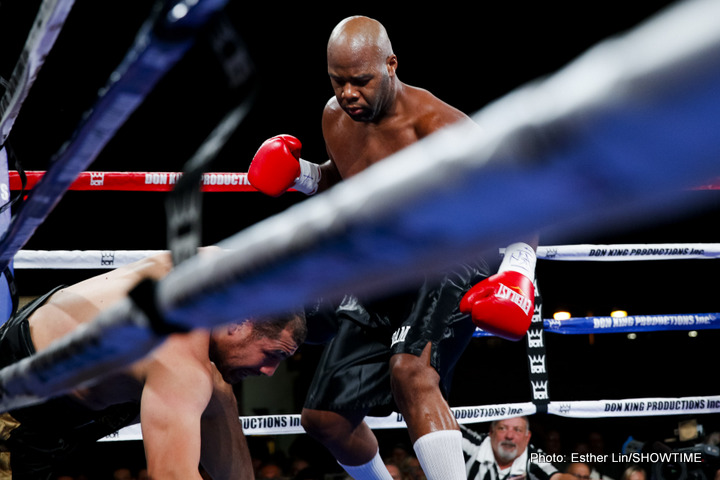 By Jim Dower: Trevor Bryan (20-0, 14 KOs) has been pushed to number one in the World Boxing Association’s new rankings for heavyweight. This is a questionable move by the WBA, because the 29-year-old Bryan hasn’t beaten anyone of note during his seven-year pro career.

Bryan hasn’t beaten anyone good enough for him to be rated above Alexander Povetkin, Dillian Whyte, Jarrell Miller, Dereck Chisora and Bryant Jennings. Those fighters have fought better opposition during their careers, and they’ve been looking a lot better.

With his number 1 ranking, Bryan is going to be getting a title shot soon against the winner of the September 29 fight between WBA ‘regular’ heavyweight champion Manuel Charr and Fres Oquendo. There’s no word when the World Boxing Association will be reducing the number of champions they have in their heavyweight rankings.

The WBA currently has TWO heavyweight world champions in Anthony Joshua and Manuel Charr. Joshua is the WBA Super Champion while Charr is the WBA World champion.

Those guys are not even close to being good enough for a fighter to be rated in the top 15 with any sanctioning body other than the WBA. If Lovejoy had beaten a solid journeyman or two, then it wouldn’t be so bad to see him rated in the top 15 by the WBA, but that hasn’t happened. Lovejoy has been beating opposition that has been woefully bad. There’s no one on Lovejoy’s 12-fight resume that is good enough for him to be rated #15.

2016 Olympic super heavyweight Silver medalist Joe Joyce might be the best of the bunch in the WBA’s top 15. The 6’6″ Joyce has the punching power, work rate and size to make waves in the heavyweight division.

Oscar Valdez says Canelo has the tools to beat GGG »