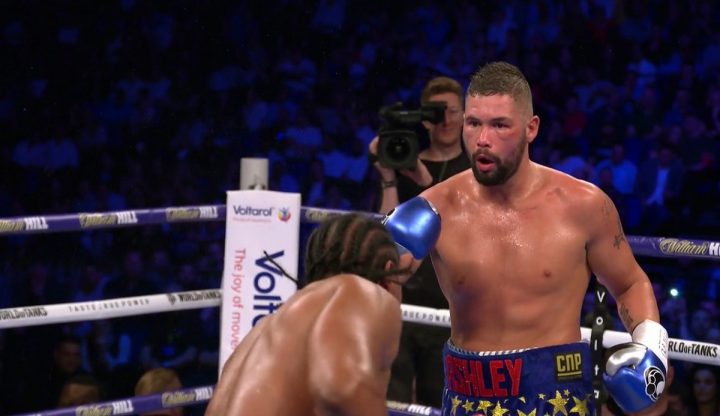 By Tim Royner: Tony Bellew has already started training for his November 10th fight against cruiserweight champion Oleksandr Usyk. Although the fight with IBF/WBA/WBC/WBO champion Usyk (15-0, 11 KOs) still isn’t a done deal, Bellew (30-2-1, 20 KOs) feels confident enough that it will be taking place for him to start training for it.

Bellew’s goal is to beat Usyk to become he undisputed cruiserweight champion. Bellew could have asked Usyk to move up to heavyweight to face him, but there wouldn’t be any world titles on the line if he did hat. The only way Bellew will get major credit for beating Usyk is to come down to his weight class to defeat him at his best weight to win his four cruiserweight belts.

In what could be a fight that is just as tough as his Usyk battle, Bellew is working at taking off weight to come back from heavyweight to make the cruiserweight limit, which he hasn’t fought at for the last two years. Taking that weight off won’t be easy for Bellew because he’s become accustomed at carrying the extra poundage. Bellew’s last two fights have been at heavyweight against David Haye. Bellew weighed 213 pounds for his first fight with Haye on March 4, 2017. In their rematch, Bellew trimmed down to 210 ¼ pounds. While some fighters are good at taking off 10 to 25 pounds of water weight for their weigh-ins without it impacting their performances, Bellew isn’t one of them. He tends to be sluggish and weak when he’s forced to take off water weight. Right now, Bellew looks to be in the 220s. He’s carrying around a lot of excess poundage that needs to come off before he’ll be ready to do battle against Usyk on November 10.

Bellew, 35, is going to need to have the perfect camp for him to have a chance of beating the 31-year-old Usyk, who is looking hard to beat right now in terms of the cruiserweight division. Bellew will need the perfect game plan to win, and even then, it’s improbable that he’ll be able to pull it off. The problem is Usyk has already arguably beaten four fighters – Michael Hunter, Murat Gassiev, Krzysztof Glowacki and Mairis Briedis – during his career that would likely lick Bellew if given the chance to fight him.

“He’s started now in camp, because if it’s November, it’s 11 weeks and he’s got to get his weight down,” Bellew’s promoter Eddie Hearn said to skysports.com. “It’s the only fight that he will come back for. It’s Usyk or retire. That’s what it will be now. It’s only really the Usyk fight that gives him the buzz.”

If Tyson Fury had shown interest in facing Bellew, then that’s a match that he would have gotten him arguably more excited than facing. Fury chose to fight for a world title against World Boxing Council heavyweight champion Deontay Wilder instead. You can’t blame Fury for taking the Wilder fight rather than Bellew. It would be a no-win situation for Fury if he had fought Bellew. If he beat Bellew, fans wouldn’t give him credit due to his size advantage and the fact that he’s a natural heavyweight. If Fury lost to Bellew or struggled to beat him, then he would be criticized by fans.

This is Bellew’s final fight of his career. He intends on retiring afterwards, but there’s always a chance that his promoter Hearn could lure him back with a big fight against someone like Andre Ward or Tyson Fury.

I’m in a good place right now! Working hard.. pushing myself on a daily basis once again, I thought I was done with all this but I guess I was wrong as per usual… A challenge has been put to me and I wanna know just how good I really am or can be… Bring on the ultimate test and let’s find out! #AllTheBelts