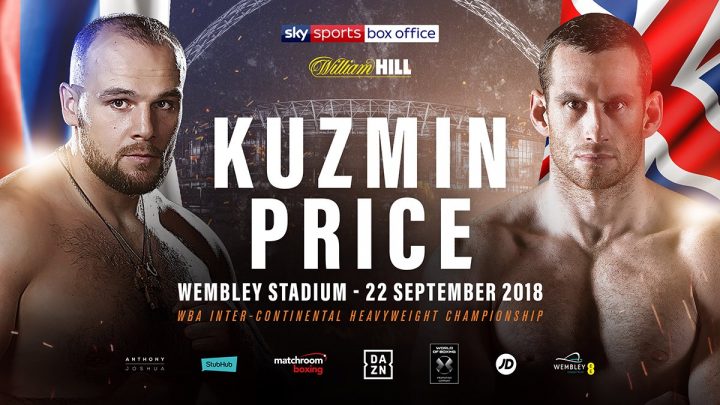 Price quit on his stool after the 4th round ended, which is a disappointing away for him to bow out. At the time of the stoppage, Price, 35, appeared to be winning the fight at the time of the fight being halted. Price suffered a left biceps injury.

In hindsight, Price should have emptied his tank in going all out for a fourth round knockout. With Price’s stamina problems, he should have planned to go all out in a race against time to get a stoppage before he gassed out. Price was completely exhausted at the time he was pulled out by his corner after the 4th.

There was a lot of grumbling from the boxing fans when referee Howard John Foster announced that results of the fight. It was a peculiar way for the fight to end. Price was starting to get tired out though at the time of the stoppage. Having the fight end in this manner saves Price’s credibility in some ways by keeping him from being knocked out like he might have been had the fight gone much longer.

Kuzmin, 31, showed that he was able to take Price’s best power shots to keep coming. It didn’t look like Price was going to be able to dent the former Russian amateur’s star’s chin no matter what he hit him with. Kuzmin just coming forward to land one hard body shot after another. Price did good job of boxing Kuzmin from the outside and blocks his punches, but the pace was clearly getting to the 6’8″ fighter by the 4th round. Price looked like he wasn’t going to be able to go too much longer without gassing out completely and getting stopped.

Price stunned Kuzmin with a right hand in round four. Kuzmin kept coming forward though and had Price breathing heavily by the end of the round. Price didn’t possess the foot movement to keep the plodding 6’4″ Kuzmin off of him the way that a more light-footed heavyweight would. If Price had any mobility, he would have given him huge problems.

In round three, Price connected with some huge shots early in the round that had Kuzmin holding to slow him down. However, Price was spent after unloading on Kuzmin and he spent much of the later part of the round covering up and taking shots.

I hate to say the R-word, but I think Price needs to think about retiring from boxing because his stamina is not good enough for him to fight at a high enough level for him to be a good heavyweight. We’ve seen Price’s stamina issues hurt his performances in many of his other fights, and tonight was a clear indication that this is an issue that is beyond fixing.

After the fight, Kuzmin and Price both spoke of wanting to possibly face each other in a rematch. Price revealed afterwards that he had a preexisting left biceps injury that has been troubling him. It obviously would have been nice if Price had revealed the injury ahead of time.

“I’ve had a slight tear in the bicep the last few weeks,” Price said to Sky Sports. “We had to take the fight, and take a chance. At the end of the fourth round, it was barely movable. It’s really frustrating. I would love the opportunity to fight him again with the right preparation.”

Price gets a moral victory in giving Kuzmin some problems before bowing out with a biceps injury. But with the direction the fight was going in, Price would have been in trouble if it had gone on too much longer. A rematch may play out in a similar pattern with Price gassing out and getting stopped.

The victory for Okolie gives him the British cruiserweight title. As bad as Okolie looked tonight, it’s difficult to imagine him going beyond the domestic level to face better opposition. Okolie’s promoter Eddie Hearn is going to need to be careful in how he matches him in the future. If Hearn makes the mistake of putting Okolie in with a good cruiserweight, it could be a disaster for him. Okolie has this ugly punch and grab technique that is hard on the eyes. It’s not a style that will work long term in the cruiserweight division for Okolie to find success.