Kellerman: GGG beat Canelo up in second half, and deserved draw 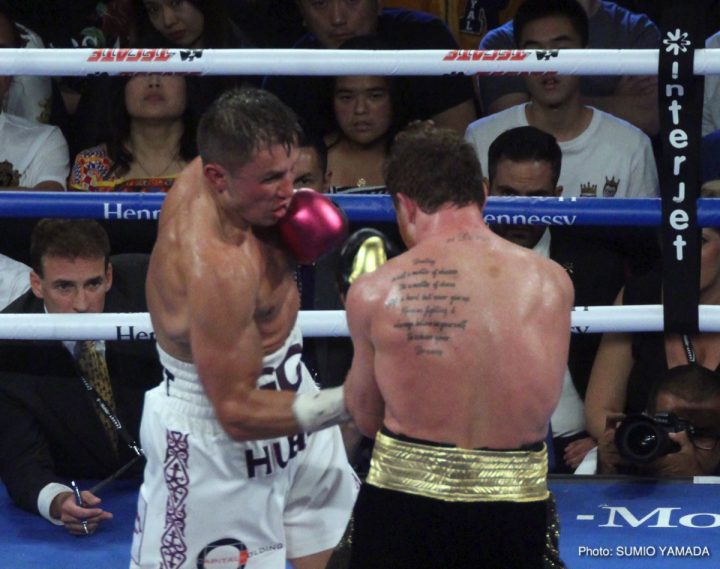 By Dan Ambrose: Max Kellerman of HBO says Gennady Golovkin really beat Saul Canelo Alvarez up in the second half of their rematch on HBO PPV last Saturday night, and he deserved a 12 round draw in their fight at the T-Mobile Arena in Las Vegas, Nevada.

Kellerman states that he’s not surprised that he win was given to Alvarez (50-1-2, 34 KOs), because he was the “money fighter” and in the history of boxing, the judges tend to give the victories the more popular money fighter. In this example, Canelo, the money fighter from Golden Boy Promotions, was given a controversial 12 round majority decision by the scores 114-114, 115-113 and 115-113.

Canelo started well, appearing to win four out of the first six rounds on Kellerman’s scorecards, but then falling apart in the second half of the fight in getting worked over by the stronger Golovkin in getting hurt by monstrous uppercuts in the 10th and 11th rounds. 2 of the judges gave Canelo round 12, which is a bone for contention with the boxing world, as a lot of people thought Golovkin edged the final round.

The judges giving Canelo the 12th was the margin of him winning the fight. It doesn’t help Golovkin that his own trainer Abel Sanchez says that his fighter took the 12th round off. However, the casual boxing fans didn’t bother listening to Sanchez. They formed their opinion that Golovkin deserved the win by watching the fight, and they were unhappy with Canelo getting his hand raised.

“I thought it should have been a draw,” Kellerman said to ESPN First take about the Canelo vs. GGG2 fight. “I thought Canelo won four of the first six, and GGG won four of the last six, but one of the four was six-six with no knockdowns at any point, so it’s a draw. One of the reasons I have a problem with the decision, the 12h round; Steve Weisfield is one of the judges, but the 12th round was pretty clearly a GGG’s round, but two of the three judges, including Steve, scored the round for Canelo. Had that round been scored for GGG, it’s a draw. So if you’re GGG today, you’re going, ‘Hold on, I should be 1-0-1, and instead I’m 0-1-1,’ because he should have won the first fight and gotten a draw in this fight in my opinion. But when you’re claiming the entire time that you’re going to fight Mexican style and you’re trying to goad the counter puncher, which is Canelo, into standing toe-to-toe with you, and then he stands toe-to-toe with you and you try and fight on the perimeter of the ring behind the jab, which he did effectively in a way, but Canelo is the one bringing the fight, Canelo is the one landing the damaging shots, especially in the first half of the fight, you might lose the decision,” Kellerman pointing out that judges tend to make up their minds in scoring fights by how the first six round went instead of realizing that fights are 12 round affairs that can change rapidly.

It doesn’t matter that Golovkin and his trainer Abel Sanchez were both talking about how they were going to fight in the ‘Mexican style’ before the fight last Saturday. It’s not what was said that has a bearing on what took place during the fight. The matches are supposed to be scored on what actually took place, not on the bold pronouncements that went on ahead of time. If that’s how fights were scored, then the judges’ decisions would never make sense because fighters are always making predictions of how they’re going to fight and what they’re going to do and they rarely do it. Before the first fight, Canelo said he was going to brawl with Golovkin and knock him out. Instead of doing that, Canelo fought defensively through most of the fight. The judges didn’t hold it against Canelo that he didn’t fight how he said he was going o fight, and the same should hold true for GGG in the rematch last Saturday.

”Canelo was ripping GGG’s body, and the thing that was so amazing about it, I was talking about how

Canelo was winning the story of the fight,” Kellerman said. ”My point was during the fight, it’s not enough to just win the story of the fight, you have to win the fight itself. The amazing thing was that in spite of Canelo doing the damaging body work, in spite of GGG fighting on the perimeter and Canelo taking the play away early, it was GGG who rallied late, just like Canelo had rallied late in the first fight. GGG rallied like a champion down the stretch to pull off the draw, to hurt Canelo late after he had been raked to the body inside the first half of the fight,” Kellerman said.

Canelo was landing some nice shots to the midsection of Golovkin during the first six rounds, but he wasn’t hurting him to the point where he was staggering and holding on. Golovkin hurt Canelo in rounds 10 and 11 to the point where he had to hold, and he was backing up. Golovkin hit Canelo with two big uppercuts in rounds 10 and 11 that were thrown with major power that seemed to take the fight out of him. Canelo was never the same after Golovkin hit him with those uppercuts. The power that Canelo had been throwing in the first half of the fight was gone, and he looked worn out from the effects of the punches. Canelo, 28, didn’t do enough in the last six rounds to deserve the decision. That’s the interesting part. Canelo dominated well in 4 of the first 6 rounds, but the way that he fell apart in the last six rounds was enough for him to fail to get the win in the eyes of a lot of boxing fans. These fights are 12 rounds, not 6, and it appears that some of the fans hat watched the fight made up their minds that Canelo was the winner based on what they saw early on. It’s like watching and NFL football game where one team is doing well in the first half of the game, and then fans assume that the team has got the victory in the bag and mentally they check out and stop watching. The team that was trailing often come back to win the game or get a tie to take it to overtime. Golovkin railed against a tired and hurt Canelo in the second half of the fight last Saturday, but for whatever reasons two of the judges failed to give him credit for having done so.

“That was an epic middleweight title fight, and I’d love to see a third one,” Kellerman said. “I was on the ring apron, and I can tell you early on and I could see GGG landing and he has a power jab, but the hard shots were landed by Canelo. Over the first half of the fight, Canelo was beating GGG up. ”Over the second half of the fight, GGG was beating Canelo up, and I thought by the end they both had won six rounds. Let me say this about Canelo. He won close decisions against Austin Trout and Erislandy Lara, and through the history of boxing it’s been that the money fighter almost always gets the close decisions. Against Floyd Mayweather, Mayweather won 10 rounds against Canelo, and one judge had it even. Against GGG, at best, I thought Caneo win six rounds, but I thought more like four or five, GGG should have won, but one judge gave Canelo 10 rounds. So if you’re GGG and you know that all the close rounds tend to go to Canelo, I’m not saying that you need to accept injustice. I’m saying that you know going in and you want Canelo to stand there with you in the trenches and Canelo obliges, you have to know that winning the fight on Stephen’s card six rounds to five with one even isn’t going to get the job done. The fight could have gone either way. It went Canelo’s way,” Kellerman said.