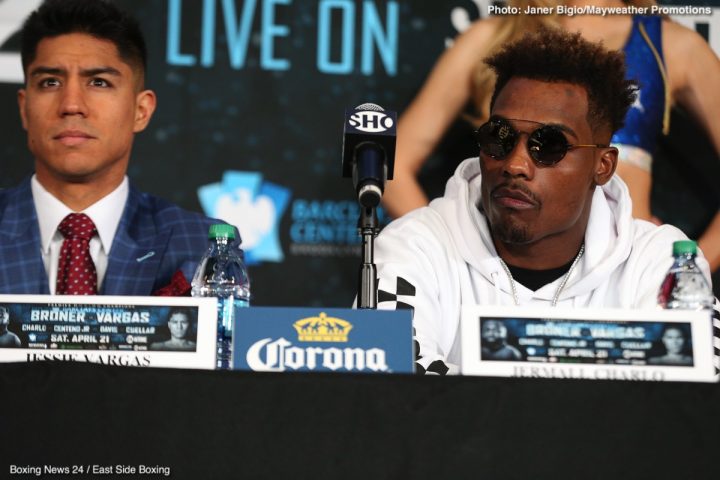 By Allan Fox: World Boxing Council interim 160 pound champion Jermall Charlo (27-0, 21 KOs) is sitting back waiting for the new WBC middleweight champion Saul Canelo Alvarez to defend his title against him. The WBC is going to be making a decision soon when the 28-year-old Canelo (50-1-2, 34 KOs) will have to defend his belt against mandatory Charlo, who has been waiting for the WBC to order the champion to face him since last year in July after he beat Jorge Sebastian Heiland to become the WBC mandatory.

The World Boxing Council chose not to order the previous 160 pound champion Gennady ‘GGG’ Golovkin to face Charlo because he had a rematch again Canelo that he was interested in. Unfortunately for Charlo, Canelo tested positive for clenbuterol, which delayed his rematch with Golovkin for an entire year until September of 2018.

Canelo defeated GGG by a 12 round majority decision to win Golovkins WBA and WBC middleweight titles. Now there’s nothing holding the WBC back from ordering the Charlo fight. Golden Boy Promotions have already said they don’t plan on making the trilogy fight with Golovkin in December, which is when Canelo will be fighting again. There is literally nothing holding the WBC back from ordering Canelo to give Charlo his title shot. Charlo has been on hold for 14 months now, so the WBC can’t let him sit and wait too much longer without being criticized by the boxing public for not enforcing the mandatories for their champions.

This is going to be a real test for Canelo’s courage and self-confidence if the WBC orders him to defend against the 6’0” Charlo. Although Golden Boy Promotions CEO Oscar De La Hoya says Charlo is one of two options Canelo has for his next fight on December 15, it’s thought that the only guy they have on their list for him is David Lemieux. He’s harmless in comparison to Charlo, and Golden Boy promotes. There’s only one problem. The casual and hardcore boxing fans aren’t asking for Canelo to face Lemieux. That’s not a figh that the fans want to see from Canelo. Lemieux still hasn’t fully redeemed himself since his losses to Golovkin in 2015 and Billy Joe Saunders in 2017. Lemieux’s 1st round knockout win over Gary ‘Spike’ O’Sullivan

Canelo’s promoters haven’t said anything about him vacating his WBC title, but he’s going to need to make a decision whether he wants to hold onto the belt if the WBC orders him to fight Charlo. Canelo vacated his WBC title two years ago when a then younger Golovkin was breathing down his neck and waiting for a title shot. The WBC had ordered Canelo to defend against GGG, but he decided he didn’t want to do that so he vacated the belt. It would be the second time that he vacated.

“We are already facing the best middleweight of recent years, and whoever comes, welcome, are the (Jermall and Jermell) Charlo, Billy Joe Saunders, Daniel Jacobs, all those fighters are on the line to face them,” trainer Eddy Reynoso said to ESPN Deportes.

If Canelo faces one of those fighters, the fans would be happy, but he’s going to look like he’s going soft if he faces Lemieux. Unfortunately, that’s who he may be fighting on December 15. The biggest risk for Canelo would be for him to face Charlo next. He can’t fight GGG, because he plans on resting for the remainder of the year to let his cut heal. Interim WBC middleweight champion Charlo won’t be an easy fight for Canelo. Charlo is more explosive than Golovkin, with faster hand speed and better counter punching ability. Canelo likes to counter punch, but so does Charlo and he’s a lot bigger and a better puncher. Canelo’s punching power a middleweight is suspect. Since moving up to 160, Canelo has failed to knockout Golovkin in their two fights, Miguel Cotto and Julio Cesar Chavez Jr. The only knockout Canelo has scored at middleweight was against Amir Khan, who fights at welterweight. Khan moved up to middleweight to challenge Canelo during his first reign as the WBC champion from 2015 to 2016. Canelo’s lack of punching power at middleweight means he’s going to need to fight a lot of 12 round fights to win. If Canelo can continue to get the type of scoring that he’s gotten in his fights with Golovkin, Erislandy Lara and Austin Trout, then he should be able to keep winning. However, Canelo will soak up a lot of punishment in needing to go 12 rounds each time he fights. When Canelo was fighting at 147 and 154, he was able to knockout most of his opponents due to his power being better in those weight classes. Now that Canelo is fighting at 160, he’s not able to knockout guys like before, and he’s taking a lot more punishment than he ever did before. At this rate, Canelo is going to get worn down quickly if he doesn’t develop some punching power for the middleweight division. At Canelo’s age at 28, he’s likely as powerful as he’ll ever be.

Golden Boy Promotions placing the 29-year-old Lemieux on the undercard of Canelo’s rematch with Golovkin was a big hint that they have him in mind for his December 15 fight. Lemieux dispatched Gary ‘Spike’ O’Sullivan with a quick highlight reel knockout that impressed a lot of boxing fans. The stoppage win raised Lemieux’s profile with the casual fans, but not so much with the hardcore fans, who are familiar with his track record and remember how he fell apart in his losses to GGG and Billy Joe Saunders. Golden Boy has a good excuse to use Lemieux as Canelo’s next opponent for December because of the difficult fight that he was just in against GGG. Although Canelo’s face wasn’t badly bruised as Golovkin’s, he still took a lot of huge shots in the fight that will cause wear that isn’t seen to the naked eye. Lemieux would be perceived as an in house fight if Golden Boy chooses him for Canelo to fight, because they also promote him. Golden Boy has been waiting to match Lemieux against Canelo ever since they first signed him to their sable. There’s no better time than now for Lemieux to fight Canelo.

If Canelo wants to surprise the fans and show that he’s for real and not a pampered fighter who looks to milk his titles against weak opposition, he’ll defend against Charlo next in December. The fans will last suspect that Canelo will take that fight, and he’ll be show that he can beat the guy that many boxing fans see as the third best middleweight in the division in Charlo.

This is a good option for Canelo to take if Jacobs defeats Derevyancheno in their fight for the IBF middleweight title. Jacobs is well recognized, and he’s popular in New York. Canelo would impress a lot of boxing fans and increase his popularity if he were to take on Jacobs and beat him.

Billy Joe Saunders (26-0, 12 KOs) has to get past Demetrius Andrade (25-0, 16 KOs) in their fight on October 20 to have a shot at getting a fight against Canelo on December 15. It’s highly unlikely that Golden Boy will want to match Canelo against a defensive artist like Saunders, because it’s a fight that would be messy and difficult to score due to the British fighter’s excellent jab, fast hands, great defense and highly mobile fighting style.

Sergiy Derevyanchenko (12-0, 10 KOs) has fight against Daniel Jacobs (34-2, 29 KOs) on October 27 for the vacant Internaional Boxing Federation middleweight itle that was stripped from GGG for his failure to defend it against Derevyanchenko. If Derevyanchenko wins that fight against Jacobs, then Canelo would do well to face the Ukrainian fighter in December if he’s willing to get back into the ring in a hurry to face him.

Jermell Charlo holds the WBC junior middleweight title. He’s the twin brother of WBC interim middleweight champion Jermall Charlo. Jermell is slightly smaller than Jermall, and not as powerful as him, but still very strong, fast and explosive. Canelo could setup a revenge of the brother situation if he chooses to fight Jermell. If Canelo beats Jermell, then it would create a lot of interest from boxing fans in seeing Jermall fight him in a revenge match.

Canelo might be leaving HBO. His contract with them has expired, and he has other options with other networks if he chooses to leave them.

“We are ready to talk and sit down,” Canelo said to ESPN Deportes about whether to resign with HBO or move on. ”We have done a good job. We are going to sit down and see what is going on. I have no problem to continue there. We are doing good work and we are going to see what suits us both, both HBO and us.”

Canelo may end up isolated if he stays with HBO and the other fighters are fighting on Showtime, DAZN and ESPN. That could be good for Canelo though if he doesn’t fancy the idea of facing the best.