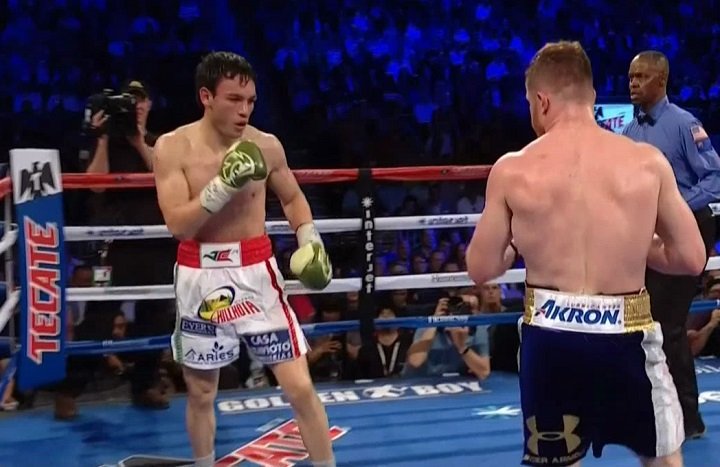 By Dan Ambrose: A rematch between retired 43-year-old former middleweight champion Sergio Martinez and Julio Cesar Chavez Jr. isn’t close to being done, according to Matchroom Boxing USA promoter Edie Hearn. The British promoter, who has a deal with DAZN to have fights streamed in the U.S, says it’s NOT true that the Chavez Jr-Martinez fight isn’t a done deal.

There have been reports of Julio Cesar Chavez saying that his son Chavez Jr. will be fighting former 154 and 160 pound champion Martinez on November 17. Unfortunately for the fans that want to see Chavez Jr. fight Martinez again, he fight isn’t close to getting done.

“It’s not true,” Hearn said to ESPN.com about the Chavez Jr. vs. Martinez 2 fight isn’t close. “Yes, I have spoken to both fighters regarding the fight, but there is no contract, nothing signed, no deal in place. It’s something that has been discussed, but a deal is not imminent. It’s not at all done. I am curious about the fight.”

Hearn clearly doesn’t have a good idea of what kinds of fights in the U.S would sell to the American fans. For Hearn to be interested in the Chavez Jr. vs. Martinez rematch, it shows that he doesn’t understand that this fight will not interest fans. What it will do is turn a lot of them off completely from wanting to see future cards from the British promoter if he makes the mistake of staging Chavez Jr. vs. Martinez 2. The fact that Hearn isn’t ruling out he fight taking place between Chavez Jr. and Martinez suggests that he wants to put that fight on for his DAZN.

Hearn needs to supply high quality boxing content for his DAZN, who he recently signed an eight-year deal with. Hearn hasn’t signed many notable fighters though, and it’s unclear whether he’ll be successful with his DAZN deal. If Hearn were to pour money in putting the Chavez Jr. vs. Martinez rematch together, he might not be happy with the lack of interest from U.S boxing fans, who would likely be apathetic about seeing the two old timers fight each other now. There are too many good fighters that the U.S fans would prefer to see rather than wasting time and money seeing two over-the-hill fighters like Chavez Jr. and Martinez fight each other again. Even if they were to fight each other on DAZN, the winner wouldn’t go anywhere. You can’t take the winner of Chavez Jr. vs. Martinez and throw them into the ring with Gennady Golovkin or Saul Canelo Alvarez. It would be a sick fight. Martinez, with his bad right knee, would be no match for Canelo or GGG. Chavez Jr. has already been beaten by Canelo, so the fans aren’t going to want to see another fight between them.

Martinez’s career was for all intents and purposes over after he suffered a bad knee injury to his right knee in his fight against Chavez Jr. in September 2012. Martinez was ahead in the 12th round of that fight when he made the mistake of standing in front of the much bigger, younger and stronger Chavez Jr., who by that point in the fight was desperately in need of a knockout to win. Chavez Jr. caught Martinez with a big right hand that knocked him down. While falling, Martinez injured his right knee.

When Martinez defeated Chavez in September 2012, Martinez suffered a severe right knee injury that required two surgeries and ultimately led to his retirement. Martinez (51-3-2, 28 KOs) won the fight by the scores 117-110, 118-109 and 118-109. The knee injury Martinez suffered in the fight caused him problems in his next two fights against Martin Murray and Miguel Cotto. Martinez ended his career with a 10th round stoppage loss to Cotto in June 2014. Martinez retired after the Cotto fight because of his knee problem. Martinez took a lot of punishment in his one-sided loss to Cotto.

Martinez’s former promoters Lou DiBella and Sampson Lewkowicz don’t want to have anything to do with his comeback, according to Dan Rafael of ESPN. The four years of inactivity, his advanced age and his knee problem would make it hard for Martinez to do well against any fighter, even a shot guy like Chavez Jr. To have a chance of beating Chavez Junior, Martinez would need to be able to move around a lot to keep from getting overwhelmed by the Mexican fighter’s size. Martinez’s knee is rumored to be healthy once again. Whether that’s true or not is unknown. If Martinez’s knee is healthy, he still is old at 43 and coming off of four years of inactivity without a tune-up. There’s a lot of ring rust that Martinez would have going into a rematch against the 32-year-old Chavez Jr.

If the Chavez Jr. vs. Martinez rematch takes place, it’ll be happening at 168. Chavez Jr. can’t make 160 any longer, and he’s been struggling to make 168. Martinez is going to be dwarfed by Chavez Jr. if he rehydrates into the 190s after making weight. It’s going to be a size mismatch. If Martinez’s right knee isn’t sound, then this fight won’t last long anyway. It’ll be a slaughter along the same lines as Martinez’s last fight against Cotto.