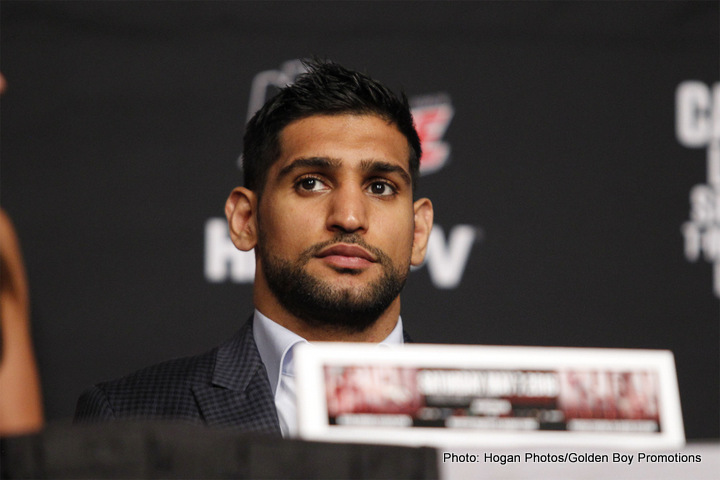 By Scott Gilfoid: Depending on how well Amir Khan does in tonight’s fight against Samuel Vargas, his promoter Eddie Hearn says he would like to possibly match him against Danny Garcia in a rematch. Hearn says Khan’s next fight will be a “Super fight,” which means it’s going to be one of these fighters that he faces: Kell Brook, Manny Pacquiao, Danny Garcia, Errol Spence Jr. or Terence Crawford.

Khan’s fight with Samuel Vargas (29-3-2, 14 KOs) tonight will be his second of a three-fight contract with Eddie Hearn’s Matchroom Boxing promotional company. With Khan’s contract with Matchroom running out in his next fight, it’s imperative that the wily promoter get his money’s worth in the three-fight deal by putting him in with one of the above mentioned welterweights. Hearn has made it very, very clear that the guy that he wants Khan to fight is his Matchroom Sport stable fighter Kell Brook. However, Khan has sounded lukewarm about fighting Book, so it’s unclear whether that fight will happen.

Hearn seems to understand that there’s a good chance that Khan will turn up his nose at doing him a favor in fighting Brook, which is why he’s now mentioning Danny Garcia, Pacquiao, Spence and Crawford as potential foes for him. Other than Pacquiao, there’s not going to be a ton of money for Khan to make fighting those guys. Khan can improve his legacy if he can beat those guys, but unfortunately he doesn’t possess the chin to beat any of them other than 39-year-old Pacquiao, who is old and no longer the fighter that he was a decade ago. Putting together a fight with Pacquiao may prove to be impossible for Khan unless he’s willing to take the smaller end of the purse.

The money that Khan gets for a fight against Pacquiao might be considerably less than what he thinks it will be, because the Filipino star is likely going to want to get the bigger portion of the purse. It’s unlikely that Pacquiao will agree to a 50-50 purse split for a fight against Khan. It wouldn’t be surprising if Pacquiao would want a 75-25 deal for a fight with Amir, which is essentially the same deals he had for his fights with Juan Manuel Marquez many years ago. Back then, Pacquiao was a huge PPV star. That’s not the case now, however. Years of stale match-making has clearly hurt Pacquiao’s popularity since his loss to Floyd Mayweather Jr. in 2015.

Khan lost to Garcia six years ago by a 4th round knockout in 2012. At the time of the stoppage, Khan had been dominating most of the fight with his hand speed. Khan got careless in round 3 and was dropped by a counter left hook from Garcia. There wasn’t enough time for Khan to recover in between the 3rd and 4th rounds, and he was quickly halted at the start of round 4 by Garcia.

For a fight between Khan and Garcia to have any realistic chance of being made, the two of them will need to win their fights tonight. Garcia (34-1, 20 KOs) faces ‘Showtime’ Shawn Porter (28-2-1, 17 KOs) tonight on Showtime Boxing at the Barclays Center in Brooklyn, New York. The vacant World Boxing Council welterweight title will be up for grabs in the Garcia-Porter fight. Hearn believes that Garcia, 30, will emerge victorious in that fight on points. However, a lot of fans think the opposite will happen. They see Porter, 30, wearing Garcia down with his high pressure offense and his roughhouse style of fighting. Garcia has struggled when facing pressure fighters during his career. The only pressure fighter that Garcia did well against during his career was Lucas Matthysse in beating him by a 12 round decision in 2013. However, Garcia was fouling Matthysse all night long in that match and he was able to get away with it due to the referee not enforcing the rules. Garcia knocked Matthysse down repeatedly with textbook low blows. These were low blows in which Garcia loaded up full blast in landing well below the belt. The referee let Garcia land his low blows without doing anything until he finally took one point away in the 12

th round. If Garcia can get away with hitting Porter with low blows tonight, he might have a chance of winning. However, if Garcia does that, Porter is likely going to cut him to ribbons with head-butts, and it’ll turn the fight into a bloody mess.

“A lot of people are talking about is it Manny Pacquiao? Is it Brook?” Hearn said to Enewsreporting about Khan’s next fight after his match with Samuel Vargas tonight. ”There are other fighters out there. There’s also Danny Garcia. A Danny Garcia rematch is a big fight, because the first fight was a good fight. Amir lost. This time it’s for a world title. You’ve got [Terence] Crawford. You’ve got [Errol] Spence. I’m excited at what happens for Amir Khan if he can do a good job with Samuel Vargas. Vargas will give a good fight,” Hearn said.

Khan vs. Garcia would be a good fight if the two of them look sensational tonight in winning their fights. However, it’s unlikely to happen. I can see Khan looking good against the 29-year-old Vargas in their fight tonight on Sky Sports at the Arena Birmingham in Birmingham, England. After all, this is a designed mismatch. That’s the whole reason Khan was matched against Vargas. It’s a showcase fight to give Khan a sure thing win and look sensational in the process. But it’s a different story with Danny Garcia, as he’s facing a guy that has the style to beat him in Shawn Porter. Even if Garcia wins the fight, he’s going to be made to look bad and he may end up winning a controversial decision.

Garcia is technically better than Porter, but he doesn’t handle pressure well at all and he never has. Unless Garcia can foul his way to a win, I see him losing tonight.

As far as Hearn’s comment about Brook beating Porter, it was a controversial win for Kell. He was allowed to hold and put Porter in head-locks the entire night. The referee that worked that fight, Pat Russell, didn’t step in penalize Brook for his constant holding. Each round was identical with Brook throwing a shot and then diving in to grab Porter with a clinch immediately. Brook did more holding than heavyweight Henry Akinwande in his 5th round disqualification against Lennox Lewis in July 1997. Brook’s holding of Porter was well beyond what Akinwande was doing against Lennox. The referee Mills Lane wasn’t going to put up with Akinwande gaming the system, so he did the only thing that he could do in disqualifying him. Brook should have disqualified as well against Porter in my view, because he basically was using holding as a strategy rather than using it to survive after being hurt. Referees are supposed to first warn fighters for holding and then move on to penalizing and eventually disqualifying. Brook got away with murder in the Porter fight, and was so sad to see how horrible the fight was.