Eleider Alvarez vs. Sergey Kovalev 2 rematch on Feb.2 on ESPN 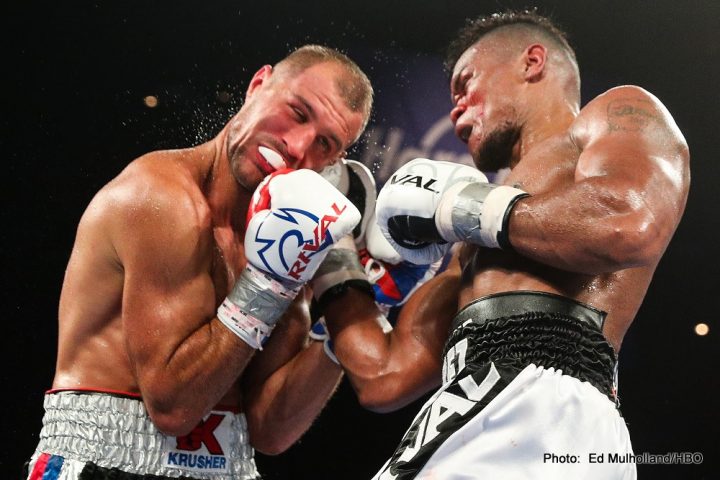 By Jeff Aranow: Eleider Alvarez will be defending his WBO light heavyweight title against former champion Sergey Kovalev on February 2 on Top Rank Boxing on ESPN a the Ford Center in Frisco, Texas. HBO chose not to match the offer by ESPN to televise it.

Last Monday, Top Rank completed a deal with Main Events, the longtime promoters for the Russian KO artist Kovalev for him to fight in the headliner bout against WBO 175 pound champion Alvarez on ESPN. Whether the U.S boxing fans will be interested in seeing a second fight between Kovalev and Alvarez remains to be seen. Kovalev is looking like yesterday’s news with him 3 out of his last 5 fights.

Kovalev’s record is 2-3 since 2016. That’s not lost on the hardcore boxing fans, which are well aware that Kovalev is on the slide career-wise. Kovalev has never been highly popular with casual boxing fans. He had a chance of becoming a star when he fought Andre Ward, but he ended losing twice to him.

Haitian born Alvarez doesn’t have a large fan base in the U.S, and Kovalev’s career has been going steadily downhill since 2016 with his two losses to Andre ‘SOG’ Ward. Although the 35-year-old Kovalev did win his two previous bouts against Igor Mikhalkin and Vyacheslav Shabranskyy before his 7th round knockout loss to Alvarez on August 4 of this year in Atlantic City, New Jersey. Those fighters weren’t high quality opposition.

Kovalev was ahead on the three judges’ scorecards at the time that Alvarez knocked him down two times in the 7th round to get a stoppage victory last March.

Placing the Alvarez vs. Kovalev 2 rematch in Frisco, Texas doesn’t make a lot of sense, as Alvarez is now based in Canada, and Kovalev lives in Florida and mainly fights on the East Coast and Las Vegas.

This fight could for all intents and purposes be a career-ender for Kovalev. He can’t afford another knockout loss to Alvarez at this point in his career. It would be almost impossible for Kovalev to come back from a second defeat at the hands of Alvarez. There’s no shame in Kovalev losing to a quality operator like Alvarez, who seems to be in the prime of his career now, but this isn’t a guy that is considered on the same level as the elite in the 175 pound weight class. Alvarez is considered by many boxing fans as a notch below the likes of Dmitry Bivol, Artur Beterbiev, Adonis Stevenson, Badou Jack, Marcus Browne and Oleksandr Gvozdyk.

Kovalev losing to Alvarez in their rematch will send a strong message that it’s time to retire. It’s difficult to imagine that Top Rank Boxing on ESPN will want to continue to televise Kovalev’s fights if he’s knocked out by Alvarez a second time. You would think that the ratings would need to be good for that fight to make it worthwhile for ESPN to continue to want to televise Kovalev’s fights if he loses to Alvarez. If Kovalev can’t beat the likes of Alvarez, then it shows that he’s going to be trapped at the contender level and will no longer be a championship level fighter.