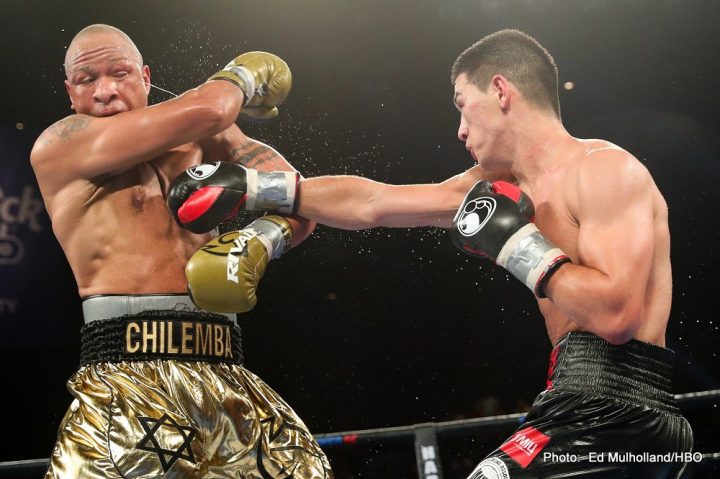 By Mike Smith: A match between Dmitry Bivol and Joe Smith Jr. is in the planning stages for the same card as WBO junior middleweight belt holder Jaime Munguia for November or December on HBO, according to ESPN. The venue for the Bivol vs. Smith Jr. fight is still to be determined at this time, but it’s expected to take place on the East Coast.

Bivol, 27, will be making his fourth defense of his WBA 175 pound tile that he won in 2017. Bivol his successfully defended his WBA title in beating Trent Broadhurst, Sullivan Barrera and Isaac Chilemba.

The 28-year-old Joe Smith Jr. is coming off of a 1st round knockout win over Melvin Russell last June. Before, Smith Jr. suffered a jaw injury in losing to Sullivan Barrera by a 10 round unanimous decision. Whether Smith lost the fight to Barrera due to the injury or not is unclear. Smith had looked excellent before that loss in being Bernard Hopkins and Andrzej Fonfara by knockout.

If Smith can fight like that against Bivol, he might make it interesting for as long as the fight lasts. Still, the fight figures to be a mismatch in favor of Bivol. He’s got a lot of talent and it’s going to take someone better than Smith Jr. to beat him. Smith ended Hopkins’ great career in knocking him out of the ring in the 8th round. Hopkins complained of being injured and failed to get back in. It looked to some like Hopkins didn’t want any more of the punishment that the hard-hitting Smith Jr. was dishing out in the fight.

The original plan was for HBO to televise a huge unification fight between Bivol and WBO light heavyweight champion Sergey ‘Krusher’ Kovalev on their network, but that plan fell to pieces recently with Eleider Alvarez stopping Kovalev in the 7th round on August 4. Bivo fought on the undercard and looked his usual sensational self in defeating former world title challenger Isaac Chilemba by a one-sided 12 round unanimous decision. Rather than Alvarez, 34, facing Bivol in a unification fight, he’ll be facing Kovalev in a rematch. It’s probably better for Alvarez that he’s facing Kovalev gain because he would have problems against Bivol with his youth, speed, power and boxing skills.

Bivol is seen as the future star of the light heavyweight division. For Bivol to realize his potential, he’s going to need to be matched up against the likes of Adonis Stevenson, Artur Beterbiev, Eleider Alvarez, Badou Jack and Oleksandr Gvozdyk. It’ll take more willingness of the other promoters in the light heavyweight division to male their fighters against Bivol for him to become the star in the 175 pound division.

Smith’s best chance of beating Bivol is to try and jump on him in the first two rounds to get him out of there quickly like he did in his 1st round stoppage win over Andrzej Fonfara in 2016. It’s unlikely that Bivol will let himself get pulled into wear right off the bat.

In the chief support on the Bivol vs Smith card, WBO 154 pound champion Jaime Munguia (31-0, 26 KOs) will be defending his title against a still to be determined opponent. Munguia looked great in stopping Brandon Cook in the 3rd round last Saturday night on the Saul Canelo Alvarez vs. Gennady ‘GGG’ Golovkin 2 card on HBO PPV at the T-Mobile Arena in Las Vegas, Nevada. There’s no word who the opponent will be for the 21-year-old Munguia to fight. His promoters at Golden Boy Promotions aren’t in a hurry o mach him against anyone dangerous in the junior middleweight division like Jermell Charlo, Jarrett Hurd, Kell Brook or Julian ‘J-Rock’ Williams. Munguia is going to be brought along slowly by his promoters at Golden Boy. They’re not going to let him fight anyone too good for a while.