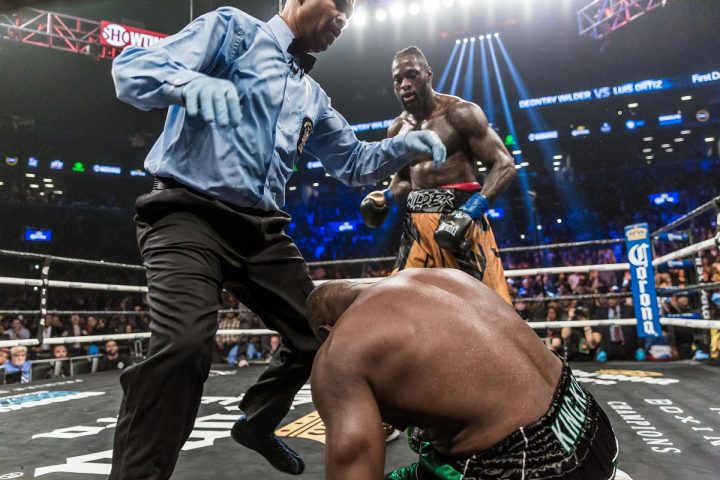 By Tim Royner: The December 1st fight between WBC heavyweight champion Deontay Wilder and Tyson Fury is possibly heading towards the Staples Center in Los Angeles, California, according to the LA Times. The Wilder vs. Fury fight was originally talked about taking place in Las Vegas, Nevada, but there is scheduling problems for it to be staged in that location, according to Lance Pugmire.

The venue is expected to be selected by the end of the week, since there’s very little time to go before December 1. The fight needs to have a location so tickets can go on sale. They want the location to be announced by October 1 if possible.

Placing the Wilder vs. Fury fight in Los Angeles could be a mistake. Neither of them has ever fought in that city before, and the location is far away from their fan bases. Wilder is from Alabama in the U.S and Fury comes from the UK. Placing the fight in Los Angeles could hurt the fight in terms of ticket sales. It’s not a pay-per-view worthy fight on U.S television but neither would Wilder vs. Anthony Joshua. That fight wouldn’t sell because the casual boxing fans in the States don’t know who Joshua is. He’s had a few of his fights piped in from the UK on Showtime, but they’ve been televised during the early afternoon in the States and seen by very few boxing fans. The money that Joshua vs. Wilder would make comes from the UK and that’s pretty much it.

Wilder (40-0, 39 KOs) wants to beat the guy that defeated Wladimir Klitschko while he was at the tail end of his prime three years ago in 2015. Fury (27-0, 19 KOs) is still unbeaten, but he’s only had two fights since the Klitschko fight in defeating Francesco Pianeta and Sefer Seferi, neither of which are considered top tier heavyweights. It’s a questionable move on Fury’s part to take on Wilder at this point in his career, but this is a fight that he’s willing to take. Fury would have likely made more money fighting IBF/WBA/WBO heavyweight champion Anthony Joshua, but for some reason he didn’t want to move in that direction.

Wilder has held the WBC title since 2015 and has defended it seven times successfully He recently defeated Luis Ortiz by a 10th round knockout.