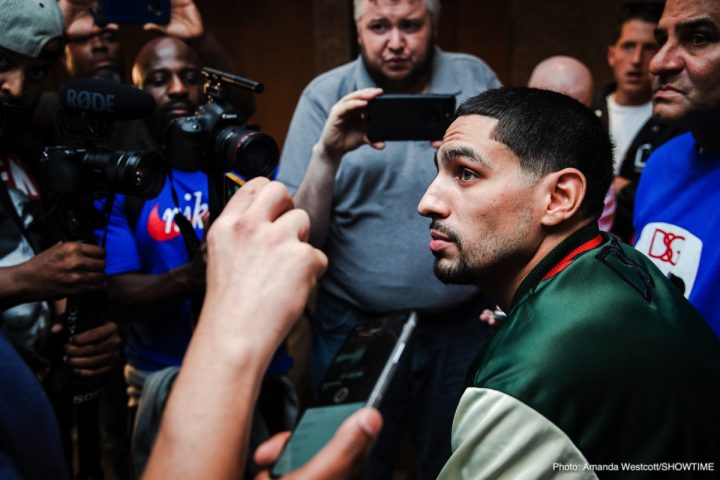 Garcia (34-1, 20 KOs) wants to unify the entire welterweight division, and he sees himself as being capable of doing it it with his boxing skills. Garcia had the chance of fighting Spence earlier this year for his IBF title, but instead, he opted to face Brandon Rios. It was a lesser fight for Garcia, but he was able to win with ease in stopping the shot-looking Rios in 9 rounds.

Garcia-Porter will be shown live on Showtime this Saturday, September 8 at the home of Brooklyn, Boxing. The two will be looking to grab Keith Thurman’s vacated WBC welterweight title that he was kind enough to give up after being out of the ring for an entire year. Porter (28-2-1, 17 KOs) confronted Thurman not long ago, angrily challenging him to face him or give up his titles. Thurman opted to do that latter, as he’s still licking his wounds from his encounter with Danny Garcia last year in March. Thurman (28-0, 22 KOs) won the fight by a 12 round split decision, but it came at a great cost in terms of his health. He suffered an elbow injury that would later require surgery to repair. Coming back from the surgery on his elbow has been a long and arduous process for the 29-year-old Thurman and he’s still now back 1 ½ years later.

“I absolutely want to unify with Errol Spence Jr. after I win. I want the biggest fights,” Garcia said about wanting to face Spence in a unification fight. “I know I’m the better all-around fighter. I can just do more in the ring than Shawn Porter, period. I’m going to prove it on Saturday.

It’s going to be job number one for Garcia to keep Porter (28-2-1, 17 KOs) off of him, as he’s more than a handful when he’s in the attack mode. Porter, 30, is not going to take it easy on Garcia and fight at a slow pace the way that his last opponent Brandon Rios did last February. Porter is going to be all over Garcia, acting like glue and not giving him any room to breathe. That’s the way that Porter fights, and it’s generally been effective. The two fighters that have been able to give Porter problems are Kell Brook and Thurman. Those two fighters used movement against him to keep him off. Brook went one step further by clinching Porter continuously to nullify his offense and beat him by a controversial 12 round majority decision on August 16, 2014. That was a fight that Porter still appeared to win, but the judges that worked the bout did him no favors with their scoring. The referee Pat Russell did Porter no favors either by electing not to take points away from Brook for his excessive clinching. It’s likely that Garcia will use a combination of the tactics Thurman and Brook employed to try and beat Porter on Saturday night. This means we will very likely see Garcia holding Porter a great deal, and moving a lot.

These are the likely strategies that Garcia will use to try and beat Porter on Saturday night:

Ideally, it would be nice if Garcia tried to beat Porter by fighting him in a one-on-one manner, because it would make for a more exciting fight for the boxing fans, but that’s not likely to happen. Garcia has already shown in the past that he prefers to use spoiling tactics when facing pressure fighters. In Garcia’s fight with Lucas Matthysse, he shoved, moved and hit him with low blows all night long to get a victory. It worked for Garcia in that fight, which is why he’ll likely use the same game plan against Porter on Saturday.

“I didn’t take any punishment in the Thurman fight,” Garcia said. ”I could have come back two months later. I know that I could have started earlier and been more relentless, but I’m just going to take that into this fight and make the best of it.”

Garcia DID take punishment in the Thurman fight. Thurman caught Garcia with a lot of heavy shots in the first six round, and it was a complete domination up to that point in the bout. Thurman was making Garcia look horrible inside the ring in catching him with pot shots, and showing that he was too fast for him. Garcia was trying to take the fight to Thurman in the first half of the fight, but he was getting hit too much for him to walk him down. When Garcia did come forward, Thurman would nail him with big left hooks and right hands, and that would stop his momentum. Porter is a different type of fighter than Thurman. He’s going to be on top of Garcia the entire fight, making him fight at close range in a rough manner that isn’t suited to his style of fighting. You can expect Porter to head-butt Garcia a great deal and hit him with elbows. Garcia will need to try and deal with that fighting style the best that he can. I don’t think it will work in his favor if he tries to fight fire with fire and head-butt Porter back, because that’s his style of fighting. Garcia has never fought like that in his career and he’s too old to start trying at his age.

There’s a very good chance that Porter is going to beat Garcia up on the inside and force a quick stoppage in the same way he did in beating Paulie Malignaggi by a 4th round knockout and Andre Berto by a 9th round stoppage. Those two were not prepared physically for the roughhouse tactics that Porter used against them, and they ended up getting worked over by him. Berto is a more physical fighter than Garcia, who is weak on the inside, and he looked helpless against Porter. The only thing that Garcia can hope for is catching Porter with a big left hook at some point in the fight that will hurt him enough for him to finish him off. If Garcia is unable to hurt Porter with his left hook counters, then he’s going to get beaten up by him. There’s no two ways about it. Garcia is not ready for Porter’s style of fighting because it requires inside skills and a lot of physicality that he doesn’t possess and he never will.

“Danny has to know that he’s getting in the ring with a bull. This isn’t going to be an easy 12 rounds. I’m going to make him earn every inch,” Porter said.

Porter isn’t kidding in saying that Garcia is getting inside the ring with a bull on Saturday night. Porter is going to be attacking him in a relentless manner, forcing him to fight a style that he’s not comfortable with. Garcia thinks he can beat Porter by out-boxing him, but that’s unlikely to happen, because he fights like an MMA type of fighter and not like someone from the boxing world.

On the undercard, heavyweights Charles Martin and Adam Kownacki will be facing each other on Saturday night. Martin is a former IBF heavyweight champion who lost his title two years ago against Anthony Joshua. Martin wants to win his IBF title back, and capture the other belts as well. He’s not going to have it easy against the heavy-handed 29-year-old Kownacki, who can punch with knockout power with either hand. Welterweights Yordenis Ugas and Cesar Barrionuevo will be battling in a title eliminator for the International Boxing Federation title that is currently held by Errol Spence.