Canelo plans on using his anger against GGG 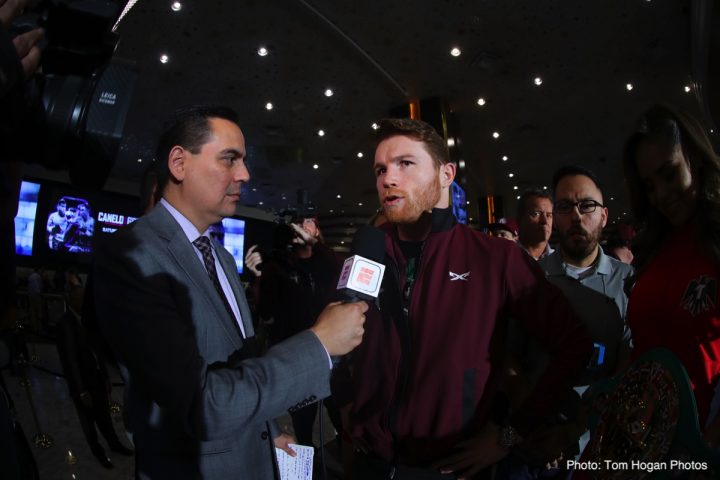 By Mike Smith: Saul Canelo Alvarez is angry and Gennady Golovkin and his team the things they’ve said about him during the build-up to their fight this Saturday night. Golovkin has been letting Canelo have it with his comments about his 2 positive tests for clenbuterol, and it’s succeeded in angering him to the point where he wants to take it out on him on Saturday night in their second fight on HBO pay-per-view at the T-Mobile Arena in Las Vegas, Nevada.

Canelo looked like he wanted to pounce at GGG during the press conference. The entire time, Canelo had a mean-looking scowl on his face, and he looked like he’d been wronged by Golovkin. Of course, from Golovkin’s perspective, he seems to feel the same way due to Canelo’s 2 positive tests for clenbuterol and for his lack of remorse that he failed to show. It’s common sense why Golovkin would be upset at Canelo given what happened, but the trash talking by the Kazakhstan fighter has gotten to the Mexican star’s final nerve.

GGG doesn’t appear to be saying things on purpose to anger Canelo to throw him off his game. Golovkin seems angry at Canelo for what he believes was him cheating by using a performance enhancing substance to get an edge against him for their fight on September 16 last year, and for their cancelled rematch. Canelo attributes the positive tests for having eaten

“I’m bothered by all the stupid things they’ve been saying and I’ve been using it as motivation in my training for this fight,” the 28-year-old Canelo said via ESPN.com. “Maybe they said what they said to get me mad, and you know what, they did it. I’m angry, but I’m going to use it [in] my favor for this fight.”

If Canelo uses what was said about him to battle GGG in center ring like he briefly did in rounds 10, 11 and 12 last September, then the boxing public will be in for a treat on Saturday night. It’s not clear that Canelo can do that. He didn’t show the stamina to fight like that last September, and he’s never been able to fight hard for an entire round without needing a long breather or two.

What we’re likely to see from Alvarez on Saturday is a variation of what he did in the first fight with him fighting hard briefly, and then retreating to the ropes to catch his breath and intimidate Golovkin by waving him forward and posing like he’s waiting to counter him. That worked for Canelo last time because Golovkin looked afraid to go after him hard for fear of being countered when he was against the ropes. In the last three rounds, Golovkin attacked more often and wasn’t shying away from attacking Canelo with power shots instead of just jabs. The judges gave Canelo rounds 10 through 12, but it was Golovkin that was finishing the rounds strong in dominating the last two minutes. You wouldn’t know it though with the crew of judges that worked the fight.

We’ll soon see if the 5’8″ Canelo can use his anger to defeat GGG this time. Canelo failed to fight the right fight the last time he fought Golovkin. Canelo used movement, and when he wasn’t moving, he was perched against the ropes, eating jabs and waiting for Golovkin to get in close enough range to hit him with a left hook counter or a short right hand. The problem for Canelo is Golovkin spent most of the fight using his reach to hit him with jabs.

Canelo didn’t have the reach to get to Golovkin when he was jabbing, and there was no way he could hit him with left hook counters with the way he was standing on the outside. Canelo was helpless most of the time, so he was forced to move away to his left to escape the pressure. Fortunately for Canelo, the judges weren’t giving Golovkin much credit for controlling the fight. If the judges had scored it the way that the judge scored Canelo’s fight with Floyd Mayweather, then he would have lost the fight. Golovkin did the same thing Mayweather did, but he didn’t have two of those judges working his fight. One judge scored the Mayweather-Canelo fight a draw, and she took a lot of heat from the fans as you would expect.

“After the first fight, I saw the errors that I made, and what I have to do. I made a complete, radical change, and you’re going to see that this Saturday,

Canelo didn’t reveal what errors he made in his first fight with Golovkin, but it would appear to involve these problems: not throwing enough punches, moving too much, failing to stay off the ropes, and not coming forward to show the judges that you were trying to win the fight.

Wednesday’s final news conference was one of the oddest that you’ll ever see for a mega-fight. Neither fighter had anything bad to say about each other. Canelo and GGG both got up at the podium and briefly spoke. Canelo said he’ll do his talking inside the ring, and then thanked the boxing fans. Even Golovkin’s trainer Abel Sanchez had little to say.

“Thank you everyone for being here. I’m ready and prepared to be in the ring soon Sept. 15,” Canelo said. If you have known m throughout my career you know I don’t like to talk I like to show it in the ring. Thank you to my fans and this fight is for Mexico.”

Golovkin and Sanchez both said that they hope that Canelo does what he said he was going to do by coming out and slugging. GGG needs to be more aggressive himself. Just playing it safe and jabbing on the outside isn’t going to get the job done on Saturday.

Canelo-GGG 2 is now offically sold out now, which is a good sign for the promotion. The previous fight between the two middleweights brought in 1.4 million PPV buys. If the second fight can outdo those numbers, then there’s going to be a lot of money to be made for Canelo, Golovkin and the promoters. That likely will mean we could see a third fight between them unless bad blood gets in the way. I doubt that. Canelo and Golovkin aren’t going to want to take a pay cut to fight difficult opponents like Jermall Charlo, Daniel Jacobs, Billy Joe Saunders, Demetrius Andrade, Ryota Murata and Sergiy Derevyanchenko.

“There is real bad blood between these two guys. Canelo has personally told me he wants to knock GGG out. GGG hasn’t been shy about expressing his thoughts about Canelo,” Golden Boy Promotion president Eric Gomez said at the news conference.

Golden Boy CEO Oscar De La Hoya wasn’t present during the final press conference on Wednesday. He was said to have a family emergency. Not having De La Hoya there at the press conference took away for it, as he brings a lot of enthusiasm. There wasn’t much cheering because the fans weren’t present, and only select members of the media were allowed in. The press conference had the atmosphere that one would normally see in a library. The lack of energy from the crowd didn’t match the stars that will be facing each other in the main event. There should have been more noise from the crowd, but what can you expect when the fighters and their saying almost nothing.

There was no face off between the two fighters during the final news conference, which is more than a little disappointing. Canelo was supposed to be willing to face off with GGG during this final week of the fight, but it doesn’t look like it’s going to happen. Now there’s only weigh-in on Friday for a chance to potentially see Canelo and Golovkin face off. Only Canelo knows why he’s not been standing to face off with Gennady.

Some boxing fans think Canelo has been playing the victim after he tested positive twice last February for clenbuterol. Whatever the case, it doesn’t help the promotion that there hasn’t been any face offs. The lack of substance from the fighters during Wednesday’s final news conference doesn’t help matters.

“I just want him to do what he said he would do,” Golovkin said.

Golovkin looked emaciated during the news conference. You have to wonder whether his weight is going to be high for the fight. if Golovkin is weak on Saturday night, then Canelo could take advantage of the situation because he looked in fighting shape already.