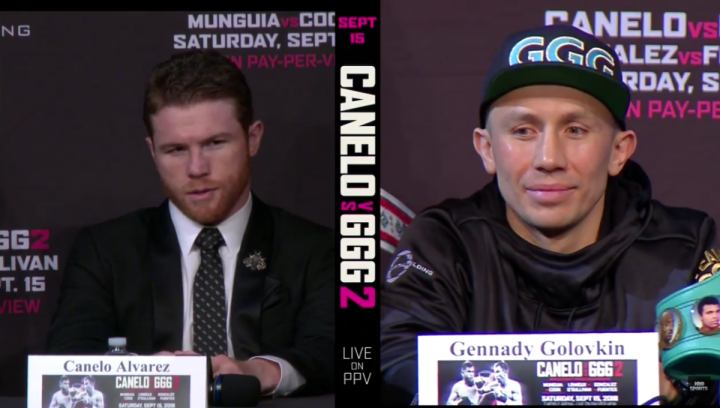 By Allan Fox: Today’s final press conference for the Saul Canelo Alvarez vs. Gennady Golovkin 2 rematch had no face offs and little in the way of fireworks involving trash talking. It’s unclear whether it was Canelo’s decision not to have a face-off with Golovkin.

Canelo was scowling almost the entire press conference pm Wednesday. Canelo, 28, had the same look on his face that he was sporting after the results of his first fight with Golovkin were announced by the judges. Canelo looked extremely bitter as if he knew things weren’t going to go well for him on Saturday.

It was understood that Canelo didn’t want a face-off with GGG until the week of the fight, but here it is the final three days before Saturday’s fight and there still isn’t a face-off. You have to figure that Canelo still doesn’t want to face off for GGG. Perhaps Canelo is still angry at some of the things GGG said about him after he tested positive twice for clenbuterol.

If Canelo is going to try and KO Golovkin on Saturday night, then he’s going to need to make dramatic adjustments to his game from the previous fight with GGG. Canelo needs to make adjustments for him to have a chance of winning, because the style that he was using in the first fight won’t work to get him a decision win unless it’s a controversial decision. Hanging on the ropes and running to his left all night long certainly won’t help Canelo get a knockout of GGG. Canelo has to make up his mind. Does he want to try and win the fight or does he want to spoil for 12 rounds and just survive like he did last time.

Golovkin has go be willing to get countered by Canelo for him to throw body shots. Golovkin looked like he was afraid to throw body shots last time because he didn’t want to be countered by Canelo and embarrassed. Each time Canelo would land a hard counter, the crowd would scream loudly. If Golovkin had been willing to let Canelo have his moments with his counters, he would have worn him down and likely stopped him. To be a knockout puncher against top level fighters, you need to be willing to get hit while you’re trying to score the knockout.

Golovkin wasn’t willing to do that last time he fought Canelo, and that’s why the fight ended up going to the scorecards. As horrible as Canelo’s cardiovascular system was in the first fight, Golovkin could have knocked him out if he’d put in some early work and not given him the rest breaks that he needed to survive.