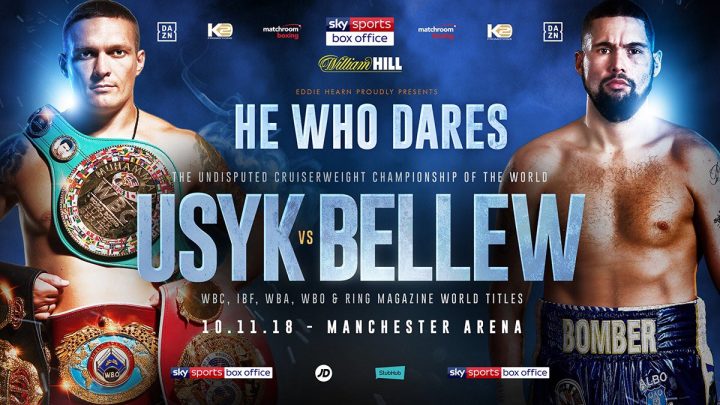 By Trevor McIntyre: Former WBA lightweight champion Anthony Crolla will be fighting Daud Yordan in a WBA 135 pound title eliminator on November 10 on the undercard of Oleksandr Usyk vs. Tony Bellew on Sky Box Office and DAZN at the Manchester Arena in Manchester, England. Crolla’s promoter Eddie Hearn of Matchroom Boxing announced the addition of the Crolla-Yordan fight during Monday’s news conference.

This is not a good undercard for the Usyk vs. Bellew card. Given how many PPV buys the fight will likely bring in on Sky Box Office, it would have been nice for Hearn to put some relevant fighters on the undercard rather than domestic level and fading guys like Crolla and Yordan.

Crolla has won his last two fights against Edison Ramirez and Ricky Burns after losing two in a row to Jorge Linares in 2016 and 2017. Crolla’s 12 round unanimous decision win over Ricky Burns last October was questionable. It was a fight that could have gone either way. Both fighters looked poor. Crolla got the nod, but he didn’t show anything in the fight that suggests that he would have a chance against the top lightweights like Mikey Garcia, Jorge Linares, Robert Easter Jr., Lomachenko, Luke Campbell or Jose Pedraza.

You can argue that #1 WBA contender Jorge Linares deserves to be in the WBA title eliminator more than #4 Crolla (44-4, 27 KOs), who he’s beaten twice in the recent past. Linares lost to Lomachenko (11-1, 9 KOs) by a 10h round knockout on May 12, so the WBA likely took that into account when they decided to make the Crolla vs. Yordan fight a WBA title eliminator. It doesn’t hurt that Crolla is backed by powerhouse Matchroom promoter Hearn. That might have something to do with the WBA making the lower ranked Crolla vs. Yordan a title eliminator rather than them insisting that one of those two face #1 WBA Linares. Yordan and Crolla would have problems with the skills and talent of Linares if they had to go through him to earn the WBA mandatory status. Linares has moved up in weight to 140, so Crolla and Yordan don’t have to worry about him, fortunately for them.

The winner of the Crolla (33-6-3, 13 KOs) v. Yordan (38-4, 26 KOs) fight will be the World Boxing Association mandatory challenger to WBA lightweight champion Vasyl Lomachenko. It’s hard to see the Crolla-Yordan winner having much of a chance against the talented Lomachenko, but they’ll at least get a nice payday fighting him. Crolla and Yordan would be way out of their league against Lomachenko. We’re probably talking about both of them quitting at some point against him if the referee doesn’t stop the fight. It’s unknown what Lomachenko’s future holds for him in the lightweight division. Lomachenko will be fighting WBO lightweight champion Jose Pedraza next in December in a unification fight, and after that, he plans on going after the IBF and WBC belts held by champion Mikey Garcia. There’s always a chance that after Lomachenko finishes unifying the 135 pound weight class, he’ll leave the division and move up to 140 to go after the champions. That would leave an opportunity for the Crolla vs. Yordan winner to try and snatch one of the vacated lightweight titles. But for the time being, the winner of the Crolla-Yordan fight on November 10 will be looking to get a title shot against Lomachenko if possible.

31-year-old Yordan has won his last eight fights since losing to Simpiwe Vetyeka by a 12th round knockout in 2013. Although Yordan has an eight-fight winning streak going for him, he hasn’t fought anyone of note in the last five years. Yordan, who comes from Indonesia, has burned through five years fighting weak opposition with little in the way of talent or experience. The best fighter that Yordan has beaten in the last five years is Maxwell Awuku, who he defeated by a close 12 round unanimous decision. Boxing fans might remember Awuku from his recent 3rd round knockout loss to World Boxing Council super featherweight champion Miguel Berchelt earlier this year on February 10. It obviously doesn’t look good that Yordan had to struggle to beat Awuku, a fighter that Berchelt batted around the ring last February. But it shows the limited talent that Yordan has. In addition to his defeat at the hands of Vetyka, Yordan also has losses to former WBA Super World featherweight champion Chris John and Celestino Caballero. Yordan loses when he steps up against better fighters. In 2009, Yordan fought Robert ‘The Ghost’ Guerrero in a fight that ended in a 2nd round no decision. The fight ended in the 2nd round due to Guerrero suffering a bad cut over his right eye from a clash of heads. Yordan looked pretty tough at the time. Guerrero would have had his hands full if the fight had gone the distance. If Yordan is still fighting at the same level now as he was back then, Crolla is going to have some problems trying to beat him on November 10, because he was more than a handful for Guerrero. Crolla is not on the same level now as Guerrero was back then. Guerrero was a very good fighter in his prime.

Yordan’s eight-fight winning streak has come against these fighters: Pavel Malikov, Campee Payom, Cristian Rafael Coria, Yoshitaka Kato, Maxwell Awuku, Ronald Pontillas, Sipho Taiwe, and Daniel Eduardo Brizuela. The win for Yordan over the 32-year-old Malikov is perhaps the best of the bunch for him. Yordan stopped Malikov in the 8th round in a fight that he was dominating from start to finish.

Hearn is stacking the Usyk vs. Bellew card with British fighters rather than adding some of his recent signings of non-British fighters for his DAZN platform. It’s unclear how much interest fighters like Crolla and Yordan will attract from non-UK boxing fans. Those guys aren’t household names outside of their home countries. Since the card is taking place in the UK, Hearn will be looking to attract British boxing fans to see the card, and the best way for him to do that is to load the undercard with UK fighters that the fans are familiar with.

In other fights on the Usyk-Bellew undercard:


« Bellew: One wrong step by Usyk and it’s over