Tyson Fury criticizes Dillian Whyte after being called a coward 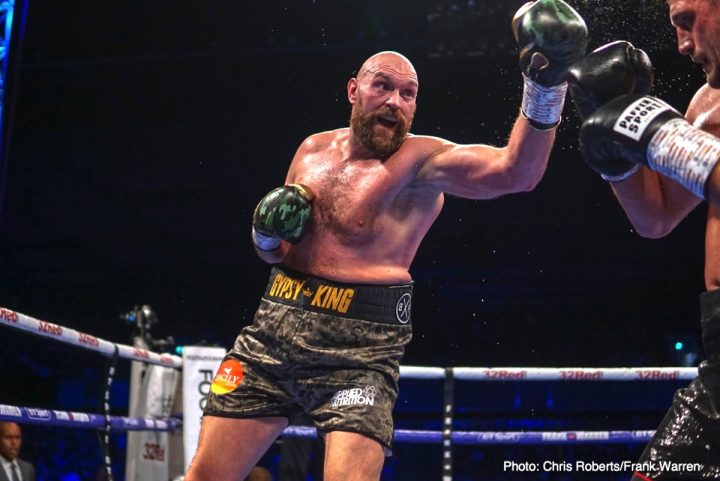 Whyte (24-1, 17 KOs) said that he would knockout Fury in five rounds or less if he’d shared the ring with him. Whyte seemed to be boiling over with the attention that Fury and WBC heavyweight champion Deontay Wilder received after the two of them announced their November fight last Saturday. The two were basking in the glow of the spotlights that were put on them by the boxing public, and they clearly were eating it up. Whyte did not sound like a happy camper and being on the outside looking in for their party-like atmosphere inside the ring at Windsor Park. It must have been tough for Whyte, who hasn’t had a big fight since being knocked out by Anthony Joshua in 2015.

Whyte also labeled WBC heavyweight champion Deontay Wilder a “coward” due to him choosing not to face him. Fury pointed out that it was Whyte’s decision not to face Luis Ortiz in a World Boxing Council title eliminator in order to earn a fight against Wilder. Whyte had the chance to put himself in position to fight Wilder if he’d faced Ortiz and beaten him, but he opted not to take the fight for some reason. Whyte also backed out of an IBF title eliminator against Kubrat Pulev after his promoter Eddie Hearn lost the purse bid for the fight, which meant the fight would have wound up taking place in Bulgaria.

“Cowards??? I could have been you!!! But someone didn’t want to fight the final eliminator vs. [Luis] Ortiz, did you, coward??? So that’s why you’re not fighting Wilder. Also, let’s face facts here. You struggled with Dereck Chisora and you should of lost that by at least four rounds, then Joseph Parker nearly knocked you out in round twelve.”

Yeah, it could have been Whyte that was fighting Wilder, like Fury says, but that would have required some courage on his part in taking on the talented Cuban southpaw Luis Ortiz, but I don’t think he wanted any part of that fight. Ortiz would been a very tough cookie for Whyte to try and beat if he’d fought him. Whyte almost lost his last fight against Joseph Parker. Whyte was dropped in the 12th round by Parker, and came close to being stopped. The difference in the fight was the controversial head-butt knockdown that Whyte was given credit for in the 2nd round when he plowed into Parker with the crown of his head, knocking him to the canvas. The referee blew the call completely by saying that Whyte had knocked Parker down.

Fury continues here with his rant about Whyte:

”You ran away from White Rino [David Allen] all night! What have you ever achieved? Oh, I remember, you got sparked by Anthony Joshua for the British title, didn’t you? The facts are you’re just a dosser for Eddie Hearn, hoping you might get something from the leftovers of Anthony Joshua’s plate. And remember who you’re talking to, the Gypsy King, the man who has done everything that you could only dream of.”

Hearn has done a good job of rebuilding Whyte’s career by putting him in with Dereck Chisora, Parker, Robert Helenius, Malcolm Tann and Lucas ‘Big Daddy’ Browne. If you ignore that Whyte should have lost to Chisora and Parker, you must say that Hearn has done an admirable job of rebuilding his career and helping him get t No.1 in the World Boxing Council’s rankings.

“Mark my words, I would knock Tyson Fury out in five rounds maximum, trust me,” Whyte said last Saturday. “This is nonsense,” Whyte said in giving commentary on the Fury vs. Pianeta fight. “What is this? Two power puff men pounding each other to death.”

Canelo vs. GGG 2 undercard to be stacked »