Rigondeaux ready to return to the ring in 2018 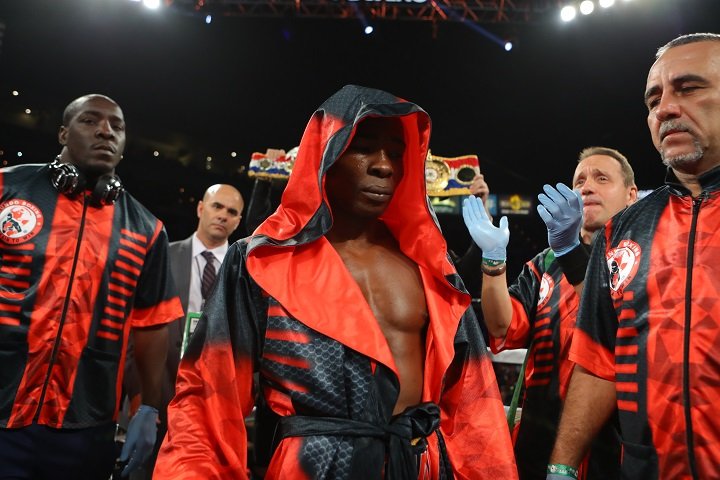 Rigondeaux received a lot of criticism from fans for looking so bad against Lomachenko, but what the fans fail to realize is he had to move up two weight classes to take the fight against the 2-time Olympic gold medalist from Ukraine. There was no catch-weight offered to Rigondeaux. Moreover, he suffered an arm injury during the fight and was unable to perform the way he wanted to after giving Lomachenko problems in round 1.

”I look forward with great optimism and before the end of 2018 I will fight again,” Rigondeaux said to the El Nuevo Herald.

Rigondeaux is looking to make a new deal with Luis de Cubas Jr., who he hopes will be able to keep him busy fighting for the remainder of his career. Despite having loads of talent, the 37-year-old Rigondeux hasn’t been able to take full advantage of it due to the top fighters not wanting to face him. Lomachenko and Nonito Donaire were both willing to fight Rigondeaux, but many of the other top fighters chose to avoid him. Lomachenko had a tremendous advantage over Rigondeaux in size and youth when they fought.

What Rigondeaux needs is a promoter with deep pockets that can line him up with the best fighters from the 122 to 126 pound divisions. Obviously, super featherweight is too big for Rigondeaux to be fighting at. He should stay at super bantamweight for him to have the best chance for winning. Even at 122, Rigondeaux is small. He rehydrates to 126, which is too way too small for the super bantamweight division. Rigondeaux would be better off moving down to super flyweight and campaigning at that weight against fighters like Srisaket Sor Rungvisai, Juan Francisco Estrada, Khalid Yafai, Donnie Nietes, Jerwin Ancajas, and Roman Gonzalez.

Rigondeaux would have an excellent chance at capturing world titles at 118 and 122 against champions Ryan Burnett, Naoya Inoue, Emmanuel Rodriguez, Zolani Tete, Rey Vargas, Daniel Roman, Ryosuke Iwasa and Isaac Dogboe. The main problem that Rigondeaux would need to deal with against those fighters is their offensive skills, youth, and power and in some cases their high work rate. Rigondeaux is more of a pot shot fighter with a low punch output. Rigondeaux would have problems against an attacking fighter like Dogboe, Rodriguez, Vargas and Inoue. Those guys would push a fast pace against Rigondeaux that would force him to either let his hands go or stay on the move. Rigondeaux is not going to win on the cards against those type of fighters if he’s on the move most of the fight.

A fight between the two aging former world champions would be ridiculous at this point. Lewis is 52-years-old and Vitali is now 47, and he holds a position as the major of Kiev, Ukraine. One or both of them could get hurt if they were to fight each other at this point. Lewis has been retired from boxing for 15 years since stopping Vitali on cuts in the 6th round in June 2013. That was the second and final loss of Klitschko’s boxing career. His previous loss was also an injury related defeat against Chris Byrd in April 2000 in losing following a shoulder injury.

‘We are going to play a chess match inside a boxing ring,” Lewis said to the Dailymail.co.uk. ”We are too old now to be pulling on the gloves again.”

The boxing public likely won’t be too eager to purchase tickets to watch Lewis and Vitali sit and play chess. You’d have to be a huge fan of those two fighters to want to sit and watch them play chess. The fans want to see them go at each other one final time.

This is disappointing news for some boxing fans because they were looking forward to Lewis and Vitali facing each other in a rematch to see if the Ukrainian fighter could avenge his loss from 2003. Vitali was getting the better of Lewis in their fight up until the fight was halted in the 6th because of a bad cut that Vitali had suffered. At the time of the stoppage, Lewis looked badly winded and it’s unclear how much longer he would have been able to go if the fight had lasted a little longer. Vitali was nailed by several big uppercuts from Lewis in the 5th and 6th, but he took them well and continued to nail him back with hard shots. The size advantage for the 6’7” Vitali over the 6’5” Lewis gave the British fighter lots of problems, as he was unable to land his power shots from the outside and his jab was completely nullified by the younger fighter. Lewis was criticized by a lot of boxing fans for staying retired and not coming back to face Vitali in a rematch. There would have been a huge amount of money for Lewis to make in a second fight against Vitali if he’d chosen to face him, but he instead decided to stay retired. Vitali wrapped up his pro career after defeating Manuel Charr in September 2012. Vitali won his last 13 fights, including capturing the World Boxing Council heavyweight title, after losing to Lewis in 2003. Vitali finished his career on a strong note. However, he was unable to get a big named opponent to face him. Vitali wanted to fight Mike Tyson and Evander Holyfield, but neither of those fights happened. Tyson retired in 2005 after losing back to back fights to Kevin McBride and Danny Williams. Tyson also lost to Lewis in 2002.