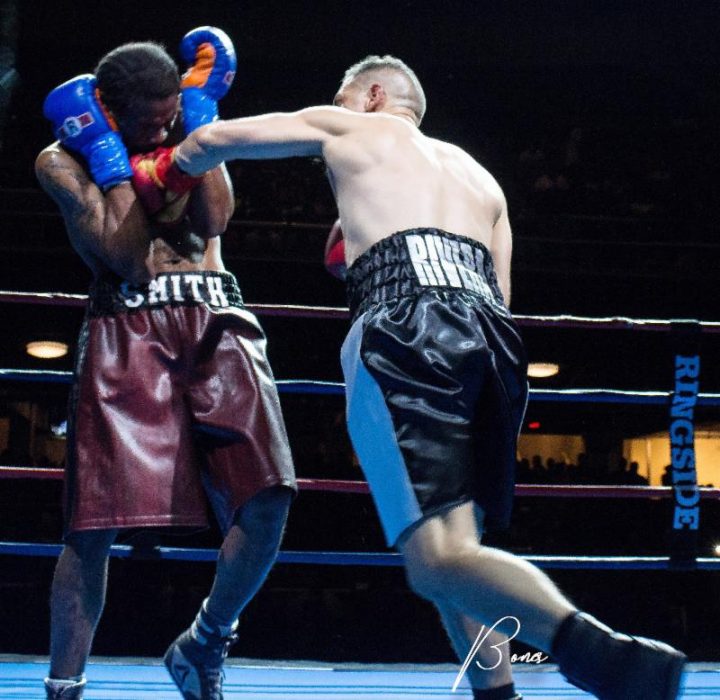 The 45-year-old Rivera (42-6-1, 25 KOs), 35 pounds lighter than he was in February when he started training, packed the house in his hometown, fully entertained his supportive fans. Three-time, two-division world champion Rivera pressured Larry “Slomoshun: Smith (10-38-1, 7 KOs) from the opening bell and he never let up.

It took a few rounds for Rivera to wear off the rust, but he fed Smith a steady diet of body shots, gradually breaking down his opponent, as he won round after round on points. Twice in the sixth round it looked like Smith was done, but the tough Texan showed a lot of heart to survive.

Finally, Rivera closed the show in the seventh round, when Smith broke his hand in the fifth round and was unable to continue, kneeling in his corner, obviously in pain.

“I’ve always been tough,” Rivera said after the fight, “but I was a little rusty. He tested me early but, once he saw I wasn’t going anywhere and knew he was in for a fight. I started warming up in the fourth round. I was always a 12-round fighter. I didn’t know he broke his hand until after the fight. I feel great. We gave a good fight to the fans who have always supported me.”

“I give myself a C+ tonight. I’m going to talk with my family, but I’m thinking about one more fight, to make it 50 for his pro career).”

In the co-featured event, Worcester super middleweight Kendrick Ball, Jr. (10-1-2, 7 KOs) demolished Fabian “El Lobo” Valdez (2-4), flooring him with a right uppercut and soon after finished him with a vicious body shot for a technical-knockout victory in the opening round. The popular Ball was fighting at home for the first time as a professional

The rematch between Worcester junior middleweight Khiary Gray (16-4, 12 KOs) and Antonio Chaves Fernandez (9-34, 4 KOs) ended in the same fashion as their first encounter did three years ago. Also fighting at home for the first time, Gray blasted out his game opponent, cracking him with a picture-perfect, left-fight combination that put Fernandez on his back. Fernandez beat the count, but referee Bob Benoit halted the action.

Springfield, MA junior lightweight Joshua Orta (1-0, 1 KO) turned in an impressive pro debut in a barn-burner that ended when (1-8-1, 1 KO), of Worcester, was unable to continue fighting after the third round.

Worcester welterweight Eslih Owuso (1-0) pitched a shutout in his pro debut, decking veteran Bryan “The Brick” Abraham (6-31-2, 6 KOs) twice in the second round, en route to a unanimous decision win.

In the opening bout of the night, 45-year-old Jose Angel “KO” Ortiz (5-14-1, 2 KOs) dropped Patrick Leal (0-5) 10-seconds into the fight, once more later in the opening round, and stopped him in the second. Oritz, fighting out of Springfield, MA by way of Puerto Rico, was fighting for the first time in five years, and he registered his first victory in seven.

Three-time, two-division world champion “El Gallo” Jose Rivera has a new opponent for his comeback fight this Friday night in “Homecoming”, presented by Granite Chin Promotions (GCP) in association with Rivera Promotions Entertainment (RPE), at The Palladium in Worcester, Massachusetts.

The 45-year-old Rivera (41-6-1, 24 KOs), who was matched against Ruben “Modern Day Warrior” Galvan, didn’t find out until yesterday (Tuesday) that Galvan had broken a finger the night before. Texas veteran Larry “Slomoshun” Smith (10-37-1, 7 KOs) is the late replacement for Rivera in the eight-round main event.

“I am not a fan of late changes,” Rivera said, “but at this point it’s either that or no fight, and I’ve trained too hard not to fight.”

The name of the event is “Homecoming” because five fighters in action are from Worcester, including three who’ve never fought there before as professionals.

A portion of the proceeds will go to Spina Bifida Association of Greater New England.