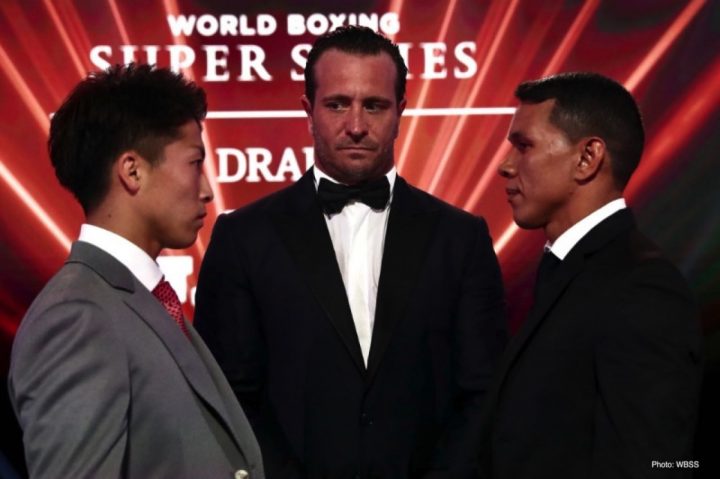 The unlucky 34-year-old Payano has he bad luck of facing the 25-year-old Inoue in his quarterfinal fight instead one of the other contestants in the eight-man tournament. Payano is expected to get an early exit in the tournament courtesy of Inoue. Payano comes into the WBSS tournament having won his last three fights since losing his WBA bantamweight title to Rau-shee Warren by a 12 round majority decision in June 2016. That was a close fight, but Payano wasn’t good enough to turn back Warren. Since that fight, Payano has beaten Isao Gonzalo Carranza, Alexis Santiago and Mike Plania. Those were three weak opponents that were made to order for Payano.

It’s possible that Inoue vs. Payano figh will be a World Boxing Super Series double-header with the second fight being WBA light welterweight champion Kiryl Relikh vs. Eduard Troyanovsky.

Inoue comes into the WBSS following a 1st round knockout victory over Jamie McDonnell on May 25 in Japan. The victory earned Inoue his third division world tile. Inoue previously captured world titles at light flyweight and super flyweight. Inoue quickly departed the 115 pound weight class without facing the top dog in the division Srisaket Sor Rungvisai. For that, Inoue received heaps of criticism from boxing fans because it appeared to them that Inoue had dodged the fight. Never the less, it didn’t matter to some fans that Inoue left the 115 pound weight class without fighting Rungvisai. They still felt that Inoue was the best fighter in the 115 pound weight class at the time he left the division. But now that Inoue is at bantamweight, he has a chance to prove himself as the best fighter in the division. There won’t be any early departures from the weight class by Inoue like we saw from him at 115. Of course, there isn’t a wrecking machine like Rungvisai at 118 either. It figures to be easy for Inoue to win all the titles at bantamweight because the division is a weak one right now.

“I didn’t expect to fight the first bout here, but I wish Japanese fans will watch and appreciate my performance at the big Yokohama Arena,” Inoue said via Fight News. ”Payano is a skillful speedster with good experience, and it may be a technical fight. I’d like to fight with patience and finally catch up with him to score a knockout victory.”

Inoue’s best wins of his short six-year pro career have come against these fighters:

Regardless of the huge hype he’s received, Inoue has faced largely limited opposition during his career. Inoue hasn’t faced any of the talented fighters in any of the weight classes that he’s fought at. By this

The organizers of the WBSS cruiserweight tournament are ready to unveil season contestants. These are the names that are being mentioned as the likely participants:

Unless IBF/WBA/WBC/WBO cruiserweight champion Oleksander Usyk vacates some or all of his titles, there won’t be any major world class level titles on the line for the season II WBSS tournament. The names that jump out at one as having a high chance of ending up in the WBSS final are Dorticos and Briedis. Those two would appear to have the best chance of making it to the WBSS final depending on the scheduling. If Briedis and Dorticos face each other in the quarterfinal or semifinal, then that obviously would preclude the two of them facing each other in the final of the tournament.

Former WBA World cruiserweight champion Yunier Dorticos (22-1, 21 KOs) gave Murat Gassiev a lot of problems in their fight in the WBSS semifinal of season one. Gassiev eventually stopped Dorticos in the 12th round in their fight on February 3 in Adler, Russia. Before folding in the 12th, the 32-year-old Cuban Dorticos gave Gassiev plenty to think about in the first 11 round. The fight was quite close going into the 12th round. With Gassiev not taking part in the season two WBSS tournament, Dorticos has a good chance of capturing the tournament if he can get past the likes of Mairis Briedis and Krzysztof Glowacki. Those two are the main threats that Dorticos will need to deal with.

Gassiev, 24, was recently soundly beaten by Usyk in the final of the season 1 World Boxing Super Series cruiserweight tournament on July 21 in Moscow, Russia. The fight was so one-sided that it would be a very bad idea for Gassiev to be thrown into the season II WBSS tournament without retooling his game to improve the flaws that he showed in losing to Usyk. It’s not that Usyk did a whole lot in beating Gassiev. Usyk basically threw a ton of jabs to keep Gassiev busy on defense. Gassiev has a bad habit of waiting for his opponents to stop throwing punches before he lets his hands go. Usyk picked up on that weakness and made sure that he kept busy on offense to keep Gassiev from being able to get his shots off. Gassiev would have problems if he had to deal with Dorticos a second time or an improved Brieidis.


« Fury vs. Wilder: Why the timing is perfect for both men to collide – The view from the Wilder side