Murata vs. Quigley & Falcao vs. Akakov targeted for Oct.20 on ESPN 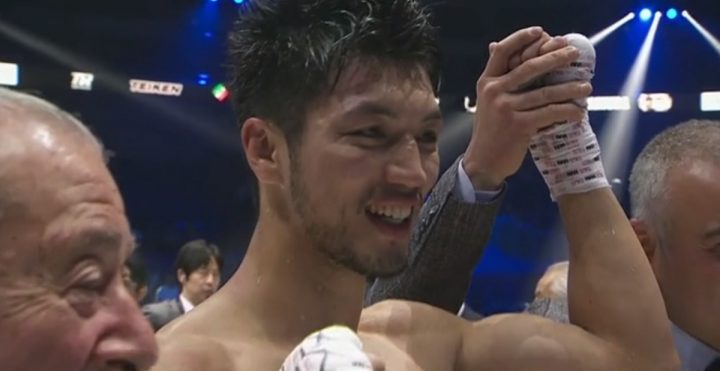 The Falcao vs. Akavov fight will be the co-feature bout on the Murata vs. Quigley card. Top Rank promotes Murata and Falcao. Neither of them are viewed by boxing fans as being in the same class as he talented middleweights like Gennady Golovkin, Saul Canelo Alvarez, Jermall Charlo, Demetrius Andrade, Sergey Derevyanchenko, Daniel Jacobs and Billy Joe Saunders. Murata has already been beaten by Hassan N’Dam. Murata did avenge the loss to N’Dam last October, but he still didn’t look nearly as impressive in beating him as he should have been if he wanted to be lumped in with the best at 160.

The winner of the Murata-Quigley and Falcao-Akavov will then face each other in a rematch potentially in 2019. What we’re likely to see is a rematch between Murata (14-1, 11 KOs) and Falcao (21-0, 15 KOs) early next year. Murata beat the Brazilian Falcao, 28, by a controversial 14-13 win in the final of the 2012 London Olympics. A lot of boxing fans had Falcao winning that fight over Murata. It wasn’t the first controversial win for Murata during the 2012 Olympics unfortunately. Murata’s 13-12 win over Abbos Aoev in the semifinal was equally controversial. It appeared that the highly popular Murata had lost the fight in the eyes of a lot of fans, but he was given the victory. Unlike a lot of fighters that took part in the Olympics, Murata had a tremendous amount of support from his home country of Japan.

”’Ill do very well against the Russian [Artur Akavov],” Falcao said to globesporte.globo.com. ”If I win, I get the Ryota Murata and take the Japanese belt in 2019.”

A rematch between Murata and Falcao likely won’t do much to interest American boxing fans, as neither of them are well known and highly followed by the average fan in the States. But in Japan, Murata is a huge star and a lot of fans will want to see him fight Falcao again. It’s quite likely that the Murata-Falcao rematch will wind up in Japan. If that’s the case, then one must hope that the judges do a good job and don’t turn in scores that don’t appear accurate to the boxing fans that see the fight. It would be disappointing if the Murata vs. Falcao rematch turns out as controversial as the first one.

Murata-Quigley and Falcao-Akavov is not a great card by any means on October 20. For starters, the date is a bad one given that it’s on the same night as the Saunders vs. Andrade fight on DAZN. The only real advantage of the Murata vs. Quigley card is it will likely be televised on regular ESPN and not on ESPN+, which is a monthly subscription service. Murata isn’t viewed as a true champion in the eyes of a lot of boxing fans. He’s seen as a belt holder. In other words, Murata is viewed as a ‘paper champion’ in the eyes of a lot of fans. Top Rank matching Murata against a fringe level fighter like Quigley (14-0, 11 KOs) obviously increases his chances of the Japanese fighter holding onto his WBA belt.

The World Boxing Association recently were said to be ordering Murata to face #2 WBA Rob Brant in his next fight. Top Rank reportedly is not going to make that fight, so it’s unclear what the WBA’s next move will be. Do they strip Murata of his WBA title or do they let Top Rank match him against Quigley instead. How much long will Murata be able to hold onto his WBA title if the sanctioning body allows him to fight Quigley instead of Brant? Thus far, Top Rank hasn’t put Murata in with anyone dangerous. In Murata’s first title defense of his WBA belt, he beat little known 38-year-old Emanuel Felice Bladamura by an 8th round knockout on April 15 in Yokohama, Japan. In the past, Blandamura has been knocked out in eight rounds by Billy Joe Saunders in July 2014 and knocked out by Michel Soro in June 2015. Murata’s eighth round stoppage win over Blandamura was the Italian’s third eighth round knockout loss. It’s unclear why Top Rank had Murata matched against a fighter like Blandamura rather than a better talent in the 160 pound division. At the very least, Murata should have been matched against the guys that knocked Blandamura out rather than him.

The 27-year-old Quigley was born in Ireland and he now lives in Woodland Hills, California. Quigley is ranked #9 by the WBA. He has previous wins over Freddy Lopez, James De La Rosa, Glen Tapia, Jorge Melendez and Daniel Rosario Cruz. Those are arguably the best fighters on Quigley’s four-year pro resume. He hasn’t faced anyone that you can call a good fighter. In Quigley’s win over Glen Tapia in March 2017, he took a lot of heavy shots from him, but he was able to outwork him to get a 10 round unanimous.

The 32-year-old Artur Akavov (19-2, 8 KOs) lost a questionable 12 round unanimous decision to WBO middleweight champion Billy Joe Saunders two years ago in December 2016 in the UK. Akavov appeared to do enough to deserve the ‘W’ but the judges gave it to the home fighter Saunders, who comes from the UK. Since that loss, Akavov has won his last three fights in beating Josue Obando, Jean Carlos Prada and Gonzalo Coria. It wouldn’t be surprising if Akavov beats Falcao, but it’s unlikely to happen. Akavov is being brought as the B-side in the fight with Falcao to setup the Murata-Falcao rematch, and it’s not probable that the judges will give the Russian fighter the decision if it goes to the cards. Akavov’s best chance of winning the fight is if he knocks Falcao out, which is unlikely to happen due to his lack of punching power. Falcao isn’t a great middleweight, but he has enough to beat a fighter like Akavov.