Mikey Garcia: I think I can beat Errol Spence 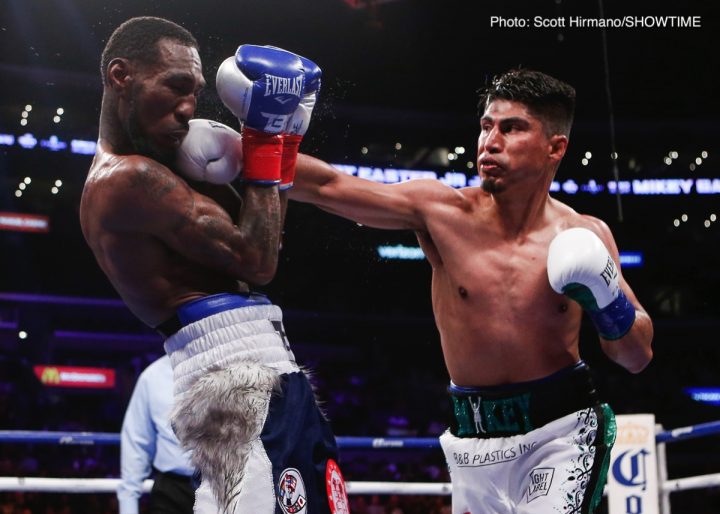 By Dan Ambrose: Mikey Garcia says he’s ready to start negotiations for a title fight with IBF welterweight champion Errol Spence Jr., who he thinks he has the talent to beat. Garcia (39-0, 30 KOs) will be moving up two weight classes to challenge Spence at 147. Garcia wants to show the boxing world that he’s the best fighter in the welterweight division by beating the perceived best fighter in 28-year-old Spence.

Garcia has won world titles in four weight classes during his career. If he can beat Spence, it would be his fifth division world title and by far his biggest victory of his career. Garcia’s best win to date is probably his eighth round technical decision victory over Orlando Salido in 2013. That fight was stopped prematurely after Garcia suffered a broken nose from a clash of heads in the 8th. Beating Spence would be a much bigger victory for Garcia as long as the fight played out in full rather than it being stopped due to an injury.

There’s a lot of pressure on Garcia now to take the fight with Spence because he talked much about wanting to fight him during the weeks before his unification fight against IBF lightweight champion Robert Easter Jr.

Spence is ready and more than willing to defend against IBF/WBC lightweight champion Garcia once he moves up in weight from the 135 pound division. Spence can’t move down in weight because it’s problem enough for him to make 147. Garcia sees something in Spence’s fights that make him believe that he can defeat him. Mikey wouldn’t move up to welterweight to fight Spence if he didn’t think that he had a shot at defeating him. It’s unclear what Garcia sees in Spence that is causing him to target him.

“I see this fight with Spence differently. I’m good at boxing, I have other skills. I am the one who would decide if I want to move up,” Garcia said to ESPN Deportes. “If I want to move up to welterweight, it’s because I think I can beat him. I have that confidence; I am in the best stage of my career.”

Spence won his IBF title last year in beating Kell Brook by a 10th round stoppage last year. Spence has only defended his International Boxing Federation title twice in beating Lamont Peterson and Carlos Ocampo. Spence now is targeting the winner of the September 8 fight between Shawn Porter and Danny Garcia. Those two are fighting for the vacant World Boxing Council welterweight title. If Mikey is willing to face Spence, then that fight will take place in November or December. If Mikey turns out to be a flake like many fans believe will be the case, then Spence will look to face the Garcia-Porter winner.

“I’m looking at what’s possible, and although many do not believe it – Errol Spence is a fight that is very attractive to me, it excites me and I will try to negotiate it in a couple of weeks,” Garcia said.

Spence is an easy fight for Mikey to make, but so would a fight between him and the best light welterweights. Garcia would have no problems facing Regis Prograis if he moved back up to 140. Top Rank might present some obstacles if Garcia wanted to fight one of their fighters at light welterweight like Alex Saucedo or Jose Ramirez. Garcia can fight Vasyl Lomachenko in 2019 if he’s willing to wait until then for the fight. There’s also fights against the likes of Jorge Linares, Luke Campbell and Yvan Mendy at lightweight.

“The more risk, the more recognition,” Garcia said. ”I accept that it is a dangerous fight, I am being advised not to take it, that I should not be at welterweight, that I am smaller and he is bigger and stronger, but all of that attracts me, I want to prove to them that I am better than him, and if I beat Spence no-one will doubt that I am the best.”

Garcia will be given a ton of credit if he beats Spence, but unfortunately it’s unlikely to happen. Spence is looking unstoppable right now, and the only guy out there that might give him problems is WBO welterweight champion Terence Crawford. If Garcia can defeat Spence, it’ll turn him into a star. Garcia already popular, but he’s not a huge PPV level star. If he can beat Spence, it’ll take his career to the next level for sure.