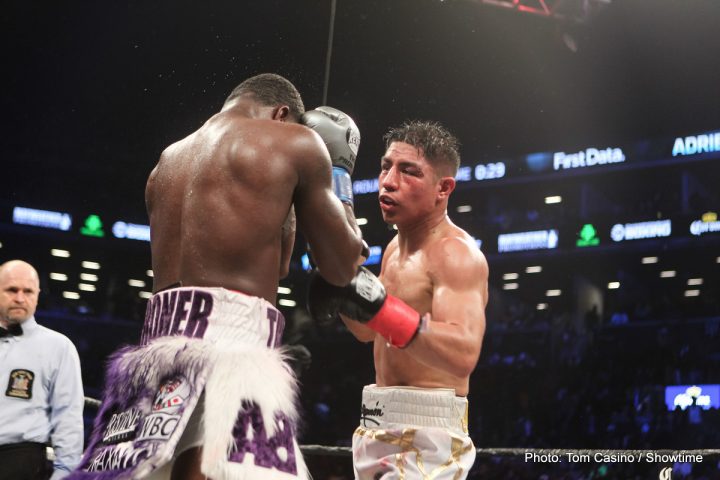 By Tim Royner: Matchroom USA announced their DAZN card for October 6th today with the following fights on the card: Jessie Vargas vs. Thomas Dulorme in headliner, Jarrell ‘Big Baby’ Miller vs. Tomasz Adamek, Artur Beterbiev vs. Callum Johnson and Daniel Roman vs. Gavin McDonnell. Those are basically mismatches. The card is horrible.

With the $1 billion deal Machroom has for signing talent, this is quite sad to see the least in seeing a card like this in a subscription service. The promoter of the card, Eddie Hearn of Matchroom Boxing USA, is trying to get American fans to subscribe to his DAZN monthly subscription service, which goes for $10 per month.

The talent that Hearn has assembled for the October 6th card is going to make it tough for him to lure many American fans to subscribe to DAZN. The main event is plain dreadful between Vargas and Dulorme. That’s not a fight that will interest fans. Vargas held titles at 140 and 147, but he was seen as a paper champion and not a true champion by boxing fans. When Vargas did face a good fighter in Manny Pacquiao, he lost in 2016. It’s disappointing to see how badly Hearn is whiffing with this assembled card. It likely wouldn’t do well in the UK either, and they seem to love everything Hearn puts in front of them over there.

Jessie Vargas vs. Thomas Dulorme – To get boxing fans to want to see Vargas, Hearn should have matched him up against someone the fans would be interested in seeing him fight like Amir Khan, Adrien Broner, Jeff Horn, Terence Crawford, Errol Spence Jr. and Andre Berto. Putting Vargas in with an exposed fighter like Dulorme is a waste of time because there’s no interest from boxing fans in seeing Vargas fight a guy that has lost several times already. Dulorme has never beaten anyone notable during his 10-year pro career. Dulorme’s best wins have come against DeMarcus Corley, Charlie Navarro, Karim Mayfield, Henry Lundy and Francisco Figueroa.

The 29-year-old Vargas is coming off of a 12 round draw against Adrien ‘The Problem’ Broner last April. While some boxing fans thought Vargas deserved the win, the fact that he couldn’t dominate a limited fighter like Broner speaks volumes about his pedigree. Vargas’ opponent Dulorme was at one time considered a good prospect many years ago. When Dulorme finally stepped it up against Luis Carlos Abregu, Terence Crawford and Yordenis Ugas, he was exposed in losing to all three of those fighters. Dulorme is coming off of a loss to Ugas last year in August 2017.

I know some boxing fans believes Callum Johnson (17-0, 12 KOs) has a good chance of beating the 33-year-old Beterbiev, but I’m not one of them. I see the 32-year-old Johnson as being overrated and not in the same class as Beterbiev. On paper, easily the best fight of the card is the match between IBF light heavyweight champion Beterbiev (12-0, 12 KOs) and Johnson. That’s not saying much though, as the fights are just so terrible.

The Fight card will be taking place at the Wintrust Arena, Chicago.

Jarrell Miller v Tomasz Adamek – Big Baby Miller (21-0-1, 18 KOs) is disappointing boxing fans by fighting the shot 41-year-old Adamek (53-5, 31 KOs) instead of a good heavyweight. After the way that Miller got in Joshua’s face recently, it was thought that he would face a quality heavyweight in his first fight with Hearn’s DAZN cards, but instead he’d facing an over-the-hill Adamek. “Yes, most definitely he’s still my top target,” Miller exclusively told Sky Sports. “He’s not used to that. He’s not used to somebody stepping to him like that,” Miller said to skysports.com about how he confronted Joshua in Hearn’s recent news conference to announce his recent DAZN signings. “He might be in big in England, but he ain’t nobody over here. He’s just another guy I want to punch in the face.” Well, obviously Miller wants to fight Joshua, but he’s doing nothing in building that fight up by facing Adamek. Miller should be fighting Eric Molina, the fighter that knocked out Adamek in the 10th round in 2016. A win for Miller over Adamek will help push the 300 pound New Yorker up the rankings, but it will do nothing to make believers of the hardcore boxing fans. The casual fans aren’t going to be interested in seeing Miller beat up Adamek, who they likely are unfamiliar with due to the many years it’s been since the Polish fighter’s matches were televised on U.S TV. A fighter that Hearn should be matching Miller up against is one of his Matchroom Sport stable fighters like Dillian Whyte (24-1, 17 KOs) or Dereck Chisora. Even domestic level fighter David Allen would be preferable to Adamek. I think Allen would likely beat Adamek at his point in his career. Adamek is long in the tooth and going nowhere fast at heavyweight. He should have never moved up in weight from cruiserweight because he was always too short, light and slow for the division.

Artur Beterbiev v Callum Johnson Beterbiev has got a guy that is made to order for him in Callum Johnson. Beterbiev does well against fighters that come straight at him, and you can bet that Johnson will fight him like that on October 6, because that’s the only way he knows how to fight. One thing that Johnson has going for him in this fight is the inactivity that Beterbiev has had in the last two years. Beterbiev has had injury and promotional problems that has limited him to just one fight against Enrico Koelling, who he beat by an unimpressive 12th round knockout last November. Beterbiev has been on the sidelines ever since then in resting for the last nine months. By the time that Beterbiev does see action against Johnson, he’ll have been out of the ring for 11 months. If this was just the first time that Beterbiev had a long period of inactivity, it wouldn’t be so bad. Unfortunately for Beterbiev, he had a similar long stretch of inactivity before his fight against Koelling. Beterbiev hadn’t fought in 11 months before he fought Koeling. Additionally, from June 2015 to June 2016, Beterbiev was out of the ring with a shoulder injury. To say that the two-time Russian Olympian Beterbiev isn’t getting the most out of his pro career is an understatement.