Loeffler: GGG is going to put huge pressure on Canelo in rematch 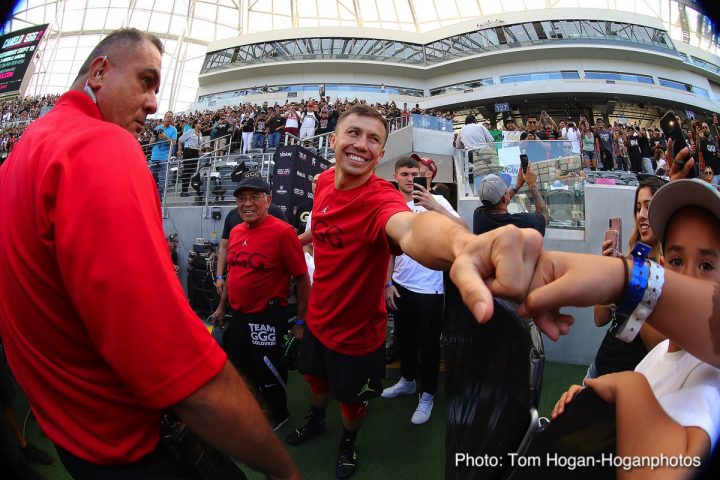 By Sean Jones: Tom Loeffler says Gennady Golovkin is determined not to allow the judges to have a say in his rematch with Saul Canelo Alvarez. The not so secret game plan for Golovkin to exclude the judges is to attack the 28-year-old Golden Boy promotions star Canelo Alvarez with unrelenting pressure from start to finish on September 15 in their rematch to force a stoppage. That pressure from GGG is going to force Canelo into a fight or flight mode. In this case, flight might not work for Canelo like it did the last time he fought GGG. Golovkin’s pressure is going to make Canelo fight him whether he wants to or not.

The end goal for GGG is to keep the three judges from being able to sit down and pick a winner and/or score the fight a 12 round draw again like they did the last time the two middleweights fought each other on September 16 last year on HBO pay-per-view at the T-Mobile Arena in Las Vegas, Nevada. For some reason, Golden Boy and Canelo wanted the rematch with Golovkin to take place at the same venue as the previous one at the T-Mobile Arena, even though both fighters had a bad experience with the questionable results.

“Those guys really want to hurt each other on September 15th,” Loeffler said to Behind The Gloves about Canelo and Golovkin. ”Golovkin has no problems looking Canelo in the eyes. I don’t think Canelo wants to look at Golovkin before fight week,” Loeffler said about the lack of joint promotion for the rematch. ”The guys don’t like each other. Triple G doesn’t want to leave it in the judges’ hands. Even though we all thought we won he first fight, he’s going to put on even more pressure in the second fight,” Loefler said.

In a peculiar, self-defeating move, Canelo doesn’t want to have any face offs with Golovkin until the week of their fight in September. Golovkin thinks Canelo is embarrassed about looking him in the eyes after testing positive twice for clenbuterol last February. Canelo simply says he’s angry at Golovkin for his trash talking, and he doesn’t even want to see him until the week of their fight. Canelo choosing not to meet with Golovkin isn’t a positive for the joint promotion for the fight. This effectively puts Golovkin, who doesn’t speak good English, promoter Tom Loeffler and his trainer Abel Sanchez in the position where they’re doing a lot of the heavy lifting in promoting the rematch. Golden Boy Promotions CEO Oscar De La Hoya and Golden Boy president Eric Gomez are doing a good job of helping out to promote the Canelo-Golovkin 2 rematch, but it’s not the same as having Canelo actively taking part in meeting with GGG, looking him in the eye for face offs. The two fighters don’t like each other, bu you’ll never know that due to the lack of face to face meetings between them.

“There’s a lot on the line for this fight,” Tom Loeffler said of the Canelo vs. GGG II rematch to ES News Reporting. ”Triple G is going for a record of title defenses. Canelo, if he wins, he wins the titles that Gennady worked so hard to get. He [Golovkin] wanted to knock Curtis Stevens out,” Loeffler said about Golovkin wanting to KO one of his past opponents that had angered him. ”He doesn’t want to leave it in the judges’ hands, and I think you’re going to see a much more determined Triple G. Even though we thought we won the first fight, with the additional pressure, he’s going to keep it out of the judges’ hands.”

It might work against Golovkin if he knocks Canelo out rather than having the fight go the full 12 rounds to win a decision. Unfortunately, Golovkin no longer appears to be trustful of the judges to do their jobs in a competent manner after he was burned by them in his first fight with Canelo. As such, Golovkin isn’t going to let Canelo hang around for 12 rounds if he can help it on September 15. Golovkin is going to be looking to KO Canelo by forcing him to fight at a speedy pace that he can’t handle. Canelo is a good fighter, but he’s never had the stamina of upper echelon guys at 147, 154 and 160. Canelo has gotten by with his size and punching power in most cases. When had to finally face someone bigger and stronger than himself in Gennady last September, Canelo finally met his match and wound up getting the worst of it. Luckily for Canelo, the judges scored it a draw instead of giving him a well-deserved loss. The fallout from the controversial draw was huge with many people angry, thinking that Canelo had received favorable treatment by the Nevada judges. For the rematch, it’ll be a different set of judges and a different referee that work the fight. Despite all that, Golovkin doesn’t want to take any chances of having the judges take away another win for him against Canelo.

”Canelo got lucky with the [Miguel] Cotto fight and [Julio Cesar] Chavez fights; lucky in the sense of those opponents were available, big name opposition, but there really isn’t another big name opponent for other than GGG,” Loeffler said. ”If it didn’t happen in September, it would have happened down the road. And depending on how it goes, we may see a third fight. If there’s a knockout, then maybe we won’t. I think everyone is waiting to see what happens September 15. If there is a third fight, it would be great. It just depends on the result of the second fight, the rematch, and then maybe we’ll take it from there,” Loeffler said.

A third Canelo-Golovkin fight will likely happen at some point no matter what the result is for the September 15 rematch. Even if GGG knocks Canelo out in the 1st round in the rematch, there will be too much money on the line for them not to face each other a third fight. If Canelo loses the rematch, then Golden Boy will look to put him in a confidence booster against the winner of the September 5th fight between David Lemieux and Gary ‘Spike’ O’Sullivan. Canelo should be able to beat either of those fighters, as long as his punch resistance evaporates after he faces Golovkin again. A good confidence booster win for Canelo over the O’Sullivan-Lemieux winner should be enough to get him mentally ready for a third fight with Golovkin. Golden Boy won’t likely want to risk Canelo getting beaten by putting him in against a good middleweight like Jermall Charlo, Daniel Jacobs, Sergiy Derevyanchenko, Demetrius Andrade or Billy Joe Saunders. Those fighters will likely be off limits for Canelo until he faces Golovkin in a third fight. After three fights with GGG, Canelo will be expected to face one of those guys if he’s going to be considered one of the elite fighters in the middleweight division.

”There’s a lot of other big fights out there for GGG. [Ryota] Murata is a big fight. [Jermall] Charlo is good fight,” Loeffler said. ”[Billy Joe] Saunders is a good fight. So right now the doors are opening. But if we don’t win on September 15, not as many doors will be open for GGG.”

Golovkin wants to win the World Boxing Organization middleweight title to add that belt to his collection. That means if Golovkin beats Canelo on September 15, then there’s a chance that he’ll then face the winner of the October 20 fight between WBO 160 pound champion Billy Joe Saunders and Demetrius Andrade. Those two guys are both tall southpaws, who would have the height and reach advantage over GGG. There won’t be much money for Golovkin in facing the Saunders-Andrade winner, but at least he’ll be able to go after the WBO title. Apart from a third fight against Canelo, the best option for Golovkin for a big payday would be for him to face WBA secondary middleweight champion Ryota Murata in a fight in Japan. There won’t be a great deal of fan interest from U.S fans, but Murata’s huge fan base in Japan would make a fight between him and GGG a huge affair. It would be a good warm-up fight for Golovkin to take before facing Canelo in a third fight.

”There were no negotiations with Andre Ward,” Loeffler said in addressing a question of whether

Golovkin was ever in discussions for a fight against former 2 division world champion Ward. “They sent an offer, e-mail. I responded. That was two hours after we announced the [David] Lemieux fight. If he [Golovkin] was going to beat Lemieux, then he was going to get the winner of Canelo and Cotto. So those were bigger fights. The winner of Canelo-Cotto was a much bigger fight. So I said, ‘depending on what happens in those two fights, maybe we’ll do it next year,’” Loeffler said.

There’s no question that Gennady and Loeffler made the smart choice in facing Canelo rather than light heavyweight Andre Ward. As we saw in Ward’s two fights against former light heavyweight champion Sergey ‘Krusher’ Kovalev, there wasn’t much interest from the U.S boxing public in those fights. If Golovkin had fought Ward, he would have had to pull in the fans single-handedly like he did when he fought Daniel Jacobs in 2017.