Jason Welborn Q&A: ‘ I’m expecting another war and I’d love to stop him’ 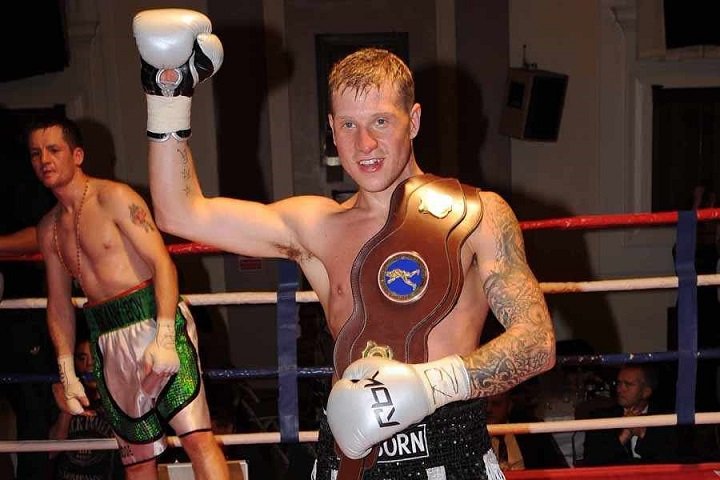 By Ian Aldous: On Saturday September 8th, Jason Welborn (23-6) will defend his British middleweight championship in a rematch against the man he took it from in a BBBOFC nominated fight of the year candidate, Tommy Langford (20-2). The bout will serve as co-main event for Amir Khan’s fight against Samuel Vargas at the Arena Birmingham, live on Sky Sports. In the midst of a busy training camp, Jason took some time to talk with me over the phone about this rematch and the bruising first battle with Langford.

IA: In the build-up to September 8th, you’ve sparred European middleweight champion, Kamil Szeremeta. What was that like and how good was he?

JW: It was good. It was really good sparring for me and made me switch on straight away. He’s strong, not like Langford, a hell of a lot stronger than Langford. It was more thinking (about getting) world-class sparring, so it made me bring the best out of me and it was really good.

IA: Did a part of you think that you might end up fighting him for his title one day?

JW: Yeah, there’s talks (of it), but I’ve got my eye on Langford to put a good performance on and get a good win. That’s all I’m aiming at and then these bigger fights are going to come whether I stop around at British level or move forward.

IA: The first fight was recently nominated for the BBBOFC fight of the year. Do you expect a similar hard, tough battle to last time or a different fight altogether?

JW: I don’t know. I was fit last time, (but now) I’m fitter, I’m more confident. I’ve just got to do what I did last time and as long as I get the win – that’s the thing. (I’ll) keep my pressure on him and it’ll get to him whether it’s early or late on in the rounds.

IA: You had Tommy hurt several times early on, did you think you had him at any point?

JW: Yeah, a few times, like the second round when I caught him and the ref jumped in, for his safety, with a standing count. Sometimes I probably didn’t realise I caught him so bad as I did after watching it back. There’s a few things we’ve worked on, I was a bit wild last time when I caught him. I should have just been a bit more accurate with my shots and everything. I’m expecting another war and I’d love to stop him and just get him out the way and we can just move on then.

IA: Did you find yourself tiring towards the end due to the high pace of the fight?

JW: No. To be honest with you, those championship rounds bring out the best in me. He’s got to take it (the title) off the champion now. I’ve got to look at it that it’s harder holding on to the British title than it is winning it. I’ve just got to be mentally switched on that night and just keep the high pace work rate up that I know we can do for twelve rounds.

IA: What was going through your mind when the twelve rounds were completed and the split decision was announced?

JW: I think it was a bit more (wider) than a split decision. I’d give him three to four rounds when he looked a bit busier than me, but obviously the accurate shots and the power shots I was catching him with – they were hurting him. Obviously a win was a win, whether a split decision or stoppage or anything, that’s the main thing and it’s the same for this time.

IA: You were a huge betting underdog, yet is it true that there was always a rematch clause in the contract if you won?

JW: Yeah, he put it in with his solicitor and that was before even the fight got announced. He put the rematch clause in, so I just know then I’ve got to fight him again, so it’s a bit frustrating he’s got another chance but he gave us the shot at it and I can’t take that away from him. I’ve just got to basically do the same again and I can look past Tommy Langford then and see what’s next.

IA: You’ve now earned yourself a No.10 world ranking with the WBA.

JW: That’s good. But there’s no rush, get the 8th of September out the way and I can have a little bit of a break, let my team do the work, whether it’s a European (title shot) or something like that. We’ll see and I’ll be ready for the next one.

JW: Yeah, I’ve always been big, strong even though I’ve not got the height. I ain’t small for a middleweight. I’m very strong and I think when I drop down that little to lighter weights – I lose my strength. I lose that work rate. I’m not ever going to be a boxer, (but) I can always work on my boxing, but my main thing is my strength and my work rate. Obviously, when I’m breaking them down, I need my strength there. We’re going to keep working on what we’re doing best at the minute. I’ve had two great wins at middleweight. We’re just going to keep winning now and go from there.

IA: How pleased were you when you heard you’ll be the co-main event for Khan vs. Vargas in Birmingham, live on Sky Sports? I think the biggest disappointment was that the first fight wasn’t televised.

JW: I was just glad that I had a shot at the British (title). When we were thinking it was going to be back at Walsall Town Hall, everyone was saying it needed to be televised. It was a small hall bill and you’re probably not going to get that atmosphere again whether it was on an Eddie Hearn bill, but at least the people have got a chance to see it worldwide now. They can see what I really am about and all this hard work I’m putting in and sacrificing – it’s paying off now. I’m thirty-two, I want to be mixing it up for the next couple of years at this level and get what I can out the sport.

IA: The winner on September 8th is mandated to face Mark Heffron quite quickly afterwards. I know you’re not looking past Tommy, but what do you know of Mark?

JW: I’ve not really seen much of him. He was a super-middle I’ve heard and they’ve stepped him down. He ain’t fought no-one, he’s got a good team around him from what I’ve heard. At this level, you’ve got to fight these kids and I’ve never ducked from no-one. I saw him fight Andy Robinson and I just think when someone’s banging him back in the seventh or eighth round – will he last? Will he last them championship rounds when I’m still in his face. Whoever it is in the next fight – we’ll be ready for it after the Tommy Langford fight. I’m more than happy to fight him before the end of the year. I’ve already told my team that. If he’s mandatory, we’ll have him in December. I’ve just got to get Langford out the way first.

IA: What can we expect on September 8th?

Amir Khan will face Samuel Vargas at Arena Birmingham on September 8, live on Sky Sports. Khan’s clash with Vargas will top a packed card in the second city, as Jason Welborn defends his British Middleweight title in a rematch with Tommy Langford, whom he snatched the title from in May via split decision in Walsall. Tickets are priced at £40, £60, £80, £100 and £200 VIP.