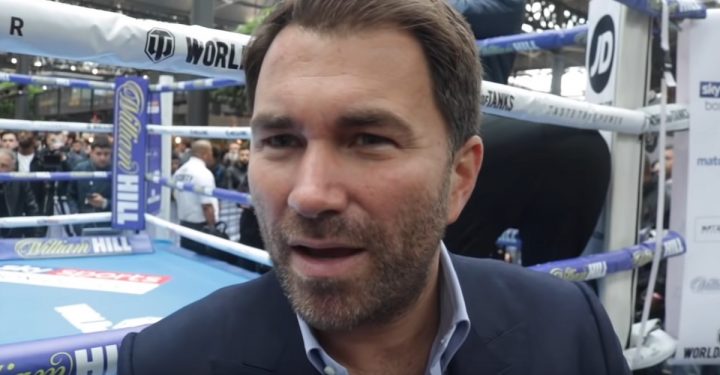 By Scott Gilfoid: Despite the lack of enthusiasm from the boxing public about the match-up between heavyweights Jarrell ‘Big Baby’ Miller and former two division world champion Tomasz Adamek on his DAZN card on October 6, Matchroom Boxing USA promoter Eddie Hearn sees it as a great fight and one that could lead to big things for the Poland born Adamek .

Hearn says Adamek has a chance to fight IBF/WBA/WBO heavyweight champion Anthony Joshua, WBC champ Deontay Wilder or Dillian Whyte if he beats the 300 pound Miller on October 6 in their DAZN kickoff card at the Wintrust Arena in Chicago. The card is called, ‘Worlds Collide.’ The fans see the card as a dreadfully bad one with mismatches from top to bottom.

Arguably the worst of the mismatches is the Miller vs. Adamek. The fans view the fight as a dull affair, as the 41-year-old Adamek is an over-the-hill fighter and no longer ranked in the top 15 at heavyweight. In contrast, Miller is highly rated at No.3 by the IBF, WBA and WBO. Hearn is feeding the 6’4” Miller another soft opponent to make him look good, as he’s coming off of an impressive 12 round decision win over form heavyweight world title challenger Johann Duhaupas.

“For Tomasz, (this is) a chance to completely turn the division on his head with a win,” Hearn said via Fight News about the Miller vs. Adamek fight. ”Tomasz Adamek beats Jarrell Miller and we can start talking about Dillian Whyte, Joshua and Wilder. If he can convince the people, show the people that he is still a threat to heavyweight division, then he has an opportunity to be in some huge fights. One win can change all that.”

I think Hearn is being disingenuous by floating the idea that Admaek has a chance to fight Joshua if he beats Miller. If anything, Hearn will put Adamek and Miller back inside the ring for a rematch if the Polish fighter wins on October 6. Since Hearn is now promoting Miller, he would need to have him avenge the loss to Adamek if he wanted to use the 300 pound New Yorker for a future fight against Joshua.

I think it’s highly doubtful that Adamek will beat Miller, but you can’t blame Hearn for talking up Adamek’s chances, because he’s trying to sell the fight card to the U.S fans. Adamek has won his last three fights against Joey Abell, Fred Kassi and Solomon Haumono. Adamek was knocked out in the 10h round two years ago by Eric Molina. Adamek was also beaten by Artur Szpilka. Given that those guys likely wouldn’t beat Miller, it kind of shows you how bad of a mismatch the Miller-Adamek fight is.

“This is the kind of thing that will drive Tomasz Adamek, inspire him,” Hearn said about the news of the boxing public seeing the Miller vs. Adamek fight as a mismatch.

I don’t think it matters if Adamek is motivated for the Miller fight. The size and youth advantage the 6’4″ 300 pound Miller will have over the 225 pound Adamek will be more than enough for him to win the fight by a slam dunk.

The other fights on the October 6 DAZN card in Chicago are as follows:

Artur Beterbiev vs. Callum Johnson – This is EASILY the best fight on the entire card.