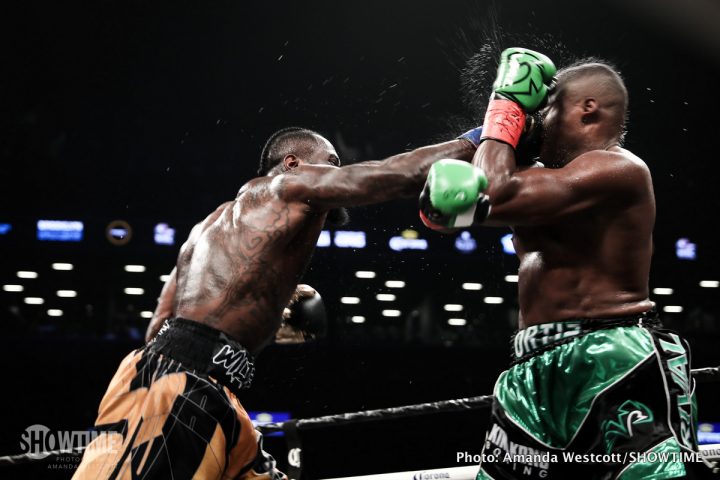 By Scott Gilfoid: Having failed with his flat fee offer of $15 million to WBC heavyweight champion Deontay Wilder to face his golden goose Anthony Joshua for April 13, British promoter Eddie Hearn is now offering the ‘Bronze Bomber’ $5 million to face fringe contender Dereck Chisora in the UK or $7 million to $8 million to face #1 WBC Dillian Whyte in the U.S in a fight that would likely be streamed on DAZN.

Wilder would be doing Hearn a favor in facing his Matchroom stable fighters Chisora or Whyte, as neither of those fights would interest American boxing fans. If Wilder has to travel to the UK to fight them, he would be putting himself at risk of winding up losing a controversial decision. Look at Joseph Parker. He’s had terrible time in his last two fights being the visiting fighter against Whyte and Anthony Joshua.

Whyte and Chisora both won fights last Saturday night against Joseph Parker and Carlos Takam respectively. Chisora stopped Takam in the 8th round after hitting him with a beautiful rabbit shot in the back of his head. Whyte is coming off of a controversial 12 round decision win over Parker in which the referee Ian John Lewis gave Whyte credit for a head-butt knockdown in round two. If not being given credit for the knockdown, Whyte wouldn’t have won the fight. Not surprisingly, Parker’s management are appealing the results of the fight.

Instead of Hearn trying to throw money at Wilder to face his Matchroom Boxing stable fighters Chisora and Whyte, he should be looking to convince the two of them to fight each other in a rematch. I mean, it’s not as if they don’t have a reason to face each other in a rematch, as Chisora was robbed of a decision in his fight with Whyte in 2016 in the minds of a lot of boxing fans. Whyte never cleared the controversy of his questionable 12 round split decision win over Chisora. Heck, they might as well face each other in a rematch. They can have the same referee work the fight that worked the Whyte-Parker fight. It could be one of those anything goes type of fights where they both go into the MMA mode and throw the Marquis of Queensbury rules out the window and just brawl.

Wilder isn’t likely to give Whyte or Chisora a title shot, as he’s got bigger fish to fry against unbeaten Tyson Fury in a fight that is expected to take place on November 10 or November 17 in the U.S. What’s interesting is Hearn seems to be in denial about the Wilder vs. Fury fight, because he doesn’t believe the contest will be taking place.

”I’m telling you, it is happening, IT’S ON,” Fury said in response to Hearn doubting that his fight with Wilder is happening.

Sounding more than a little bitter, Hearn said this about Tyson Fury’s fight with Wilder as quoted by Michael Benson:

I hate to say it but Hearn doesn’t seem to be a happy camper with the news of Fury being on the verge of taking on the talented 6’7” Deontay. I hope Hearn doesn’t go to pieces when Fury and Wilder face each other in November in the U.S. The thing is, it’s not as if Hearn didn’t have a chance of matching his gravy train fighter Anthony Joshua against Wilder. If Hearn had given Wilder a fair percentage split offer instead of the $15 million flat fee, they’d be facing each other in September at Wembley Stadium instead of AJ fighting the over-matched 38-year-old Alexander Povetkin on September 22 in a fight that few boxing fans are interested in seeing. Wilder vs. Joshua is a fight that is believed will bring in over $100 million.

Hearn’s offer of $15 million is clearly a low-ball offer for Deontay, and it’s quite sad because it shows you how disinterested Hearn was in putting the Wilder-Joshua fight together. If Hearn were truly interested in making that fight, he would have at least given Wilder a percentage offer. When you see a promoter not even willing to give another popular fighter a percentage offer, it tells you that they aren’t serious about wanting to make that fight. Some boxing fans think Hearn’s $15 million offer to Wilder was never intended to be a serious one, which is why you can argue that there was never a date or a venue included with the offer for that fight.

Hearn’s decision to not stick it out with the Wilder negotiations for the September fight will come back to haunt him when/if he attempts to restart the talks with Team Wilder after the mismatch against Povetkin. Wilder now wants a 50-50 offer, and he doesn’t sound like he’s kidding around. If Joshua seriously wants to try and get his hands on Wilder’s World Boxing Council heavyweight strap, which some fans believe is the only world title that counts, then he’s going to need to give Deontay parity in the negotiations. That means that Wilder will need to get half of the money for the fight. As such, if the Joshua-Wilder fight pulls in $100 million, Wilder will walk away with $50 million instead of a measly $15 million flat fee. That offer seems more in tune with a Joshua vs. Whyte II rematch than it does for a Wilder fight. Whyte would likely be more than happy to be given $15 million flat fee for a second fight against Joshua.