Frampton: I’m on a different level than Luke Jackson 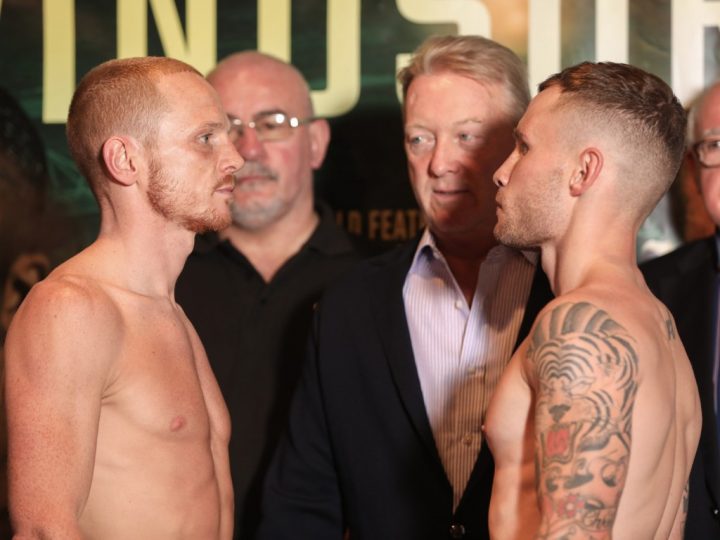 By Scott Gilfoid: Carl Frampton expects to have zero problems tonight beating Luke Jackson in their fight at Windsor Park in Belfast, Northern Ireland. Frampton (25-1, 14 KOs) has what should be a nice soft defense of his interim World Boxing Organization 126 pound title against the 33-year-old Australian Jackson (16-0, 7 KOs) in the headliner fight on the card, which has former heavyweight world champion Tyson Fury unbelievably in the co-feature bout against former two-time world title challenger Francesco Pianeta.

Frampton’s management has done him no favors by putting him on the same card as Fury’s second fight of his comeback, because he doesn’t have a good enough opponent facing him to overshadow the 6’9” Fury and his fight against Pianeta.

“I just believe that I am a different level (to Jackson),” Frampton said to ESPN.com. “It doesn’t matter what anyone says right now, it’s what happens on the night that’s the important thing.”

Well, it’s pretty obvious that the 31-year-old Frampton is on a different level as Jackson, but that’s the whole point in the fight being made. Frampton has been put in with a guy like Jackson for a reason. Frampton is getting older and he’s not the same fighter that beat Leo Santa Cruz by a controversial 12 round majority decision in 2016. Frampton has aged since then, and the two fights with Santa Cruz helped him age by taking something out of him. Frampton has looked terrible in his last two fights against Nonito Donaire and Horacio Garcia.

“It’s all about getting the hand raised at the end of the night and that’s what I’m going to do. I’m ready for this fight,” Frampton said about his belief at winning at all costs no matter who he faces.

Hopefully, Frampton ups the level of his opposition after this fight because this is his third soft opponent in a row since his second fight against Santa Cruz. Frampton arguably lost his two fights with Santa Cruz, and his fight with Scott Quigg should have been a 12 round draw. Against top level fighters, Frampton has no looked good at all.

A lot of boxing fans think Frampton should have been given a loss against Horacio Garcia last November in Belfast. Frampton was knocked down by Garcia in the 7th and he was dominated in the second half of the contest against the younger, bigger and stronger Mexican fighter. Saul Canelo Alvarez was at ringside and he saw Garcia winning the fight, as did a lot of boxing fans.

“In the last year everything has flipped for me,” Frampton said. ”I was winning fights and beating big names but I wasn’t enjoying it — I am enjoying it (now). I’m in my prime now and you’re going to see bigger performances.”

I think Frampton is kidding himself about his comment about him still being in his prime. That’s obviously not even close to being true. Frampton is on the downside and he hasn’t been beating big names as he says. Yeah, Frampton beat Santa Cruz and Quigg by controversial decisions, but the boxing public thought he lost both of those fights. If Frampton wants to call them wins, then that’s on him, but the fans saw him lose to Quigg and Santa Cruz in BOTH of their fights.


« Tyson Fury: Wilder & Joshua haven’t got a brain cell between them