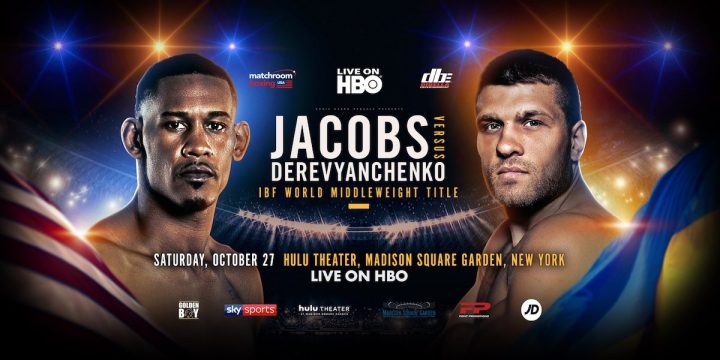 It’s a decent title defense by Machado, but far from a great one. This fight would be a better one if the 29-year-old Evan hadn’t been knocked out in the 1st round by Javier Fortuna in 2012. Evan has won his last four fights since then, but he’s not been all that busy as you can tell. Evan has fought just four times in the last six years. He has recent wins over Luis Rosa, Billel Dib, Miguel Del Valle and DeWayne Wisdom. Those are good victories, but nothing to make one believe that Evan has a shot at defeating Machado. This fight will likely be as competitive as Evan’ fight Fortuna. In other words, don’t take break during the 1st round because you might miss the entire fight.

Jacobs-Derevyanchenko is a good fight depending on what game plan Jacobs brings to the fight. If he runs from Derevyanchenko like he did in losing to Golovkin last year, then this fight could be a real disaster and not the match that the boxing fans thought it would be. It’s hard to know for sure what Jacobs is going to do in any given fight. In his last bout against Maciej Sulecki last April, Jacobs brawled with him for 12 rounds, but that was because he was facing a weak puncher with absolutely no power to speak of. Sulecki, 28, wasn’t a threat to beat Jacobs, so he was fine with slugging with him. But against Golovkin, Jacobs was running around the ring for most of the fight and making it dull to watch. It wasn’t a competitive fight in the least. After the fight, Jacobs complained long and hard about how he should have been given the victory over Golovkin. Even a year later, Jacobs was still complaining to anyone that wanted to listen to him how he deserved the victory over GGG. The fact of the matter is Jacobs’ safety first style of fighting ruined his any chance of trying to win the fight, so he came up short. Would Jacobs have won the fight if he stood and fought Golovkin all night long? We’ll never know for sure, because it might have ended badly for the New Yorker. What we do know is when Jacobs stood and punched with GGG in the 10th, he was staggered badly and almost knocked out. Just going by that round, Jacobs wouldn’t have lasted long against GGG if he had slugged it out instead of running for most of the fight.

Jacobs (34-2, 29 KOs) will be trying to turn his career around with a big win over Derevyanchenko. This is by the toughest fight for Jacobs since his 12 round unanimous decision loss to Golovkin in 2017. Jacobs, who is promoted by Eddie Hearn of Matchroom Boxing USA. Hearn has big plans for the 31-year-old Jacobs if he can get past Derevyanchenko. If Jacobs wins that fight, Hearn’s hopes are for him to fight the winner of the September 15 between Saul Canelo Alvarez and Golovkin. Jacobs is currently under contract with HBO. It’s unclear whether HBO will extend Jacobs’ contract of not once it expires.

It would be in HBO’s best interest to keep Jacobs under contract for the time being until Canelo or Golovkin shows interest in fighting him. If HBO were to let Jacobs’ contract expire, then Hearn will have him fighting on DAZN. That might make it a lot trickier to setup a fight between Jacobs and the winner of the Canelo vs. Golovkin II fight, because they would have to really value the IBF title for them to want to fight on DAZN.

The IBF recently stripped Golovkin of his title with their organization after he failed to commit to defending it against their designated mandatory challenger. It’s unclear whether Golovkin still values the IBF title. Fighting Jacobs makes sense if Golovkin feels that the IBF strap would be worth fighting for. Since Golovkin already beat Jacobs, it’s pointless for him to fight him a second time. Other than Golovkin going after the IBF title again, there’s no reason for him to face Jacobs again. The boxing public would prefer to see GGG fight interim WBC champion Jermall Charlo, WBO champion Billy Joe Saunders, Demetrius Andrade, Derevyanchenko, WBA ‘regular’ champion Ryota Murata or even face Canelo Alvarez a third time.

The fights for the October 27 card on HBO are as follows: