Canelo and GGG talk about their lost respect for each other 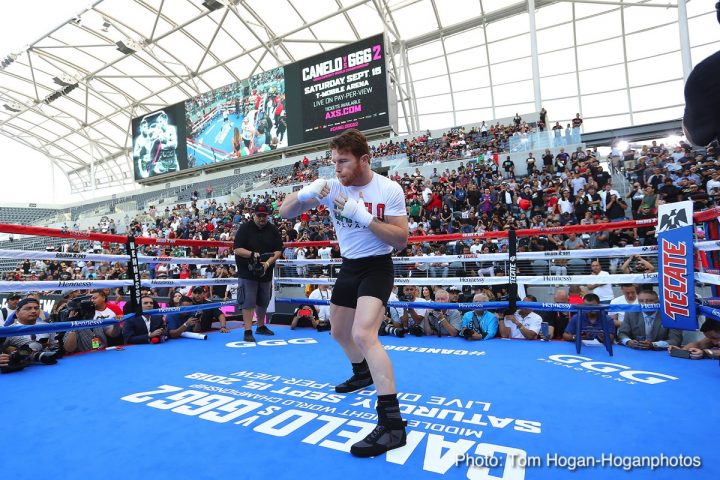 By Allan Fox: In HBO’s 24/7 documentary, Saul Canelo Alvarez and Gennady Golovkin discuss in the early part of the show how they’ve lost respect for each other as they head into September 15 rematch on HBO pay-per-view at the T-Mobile Arena in Las Vegas, Nevada.

Both fighters seem very angry at each other. Canelo is upset at Golovkin for posing as a great fighter despite the fact that he’s mostly been padding his record against mediocre opposition during his 14-year pro career. Golovkin’s issue with Canelo seems to be about his two positive tests for clenbuterol, which has led to their May 5 rematch being canceled after he was suspended for six months by the Nevada State Athletic Commission.

What’s interesting is here is that Golovkin seems to be genuinely angry at Canelo, and not just pretending in order to increase interest in the fight by the boxing public. GGG seems to be really upset in an honest way. He has a good reason to be irate after Canelo testing positive twice for the performance enhancing substance clenbuterol last February. Golovkin sees Canelo as a drug cheat. Canelo’s arrogance seems to really bother Golovkin as well.

GGG wants Canelo to show shame and be apologetic for his positive drug tests, and the fact that he’s not, it angers him to no end. If Golovkin had seen Canelo’s past fights against Erislandy Lara and Floyd Mayweather Jr., he wouldn’t be surprised that he’s coming across as arrogant. After Canelo clearly lost to Mayweather and Lara, he didn’t give either of them credit. He insisted that he’s beaten Lara when the fact of the matter if he only landed 31 head shots in the entire 12 round fight. That fight was even more controversial than the Canelo-Golovkin match. Canelo was the same way after his fight with Golovkin. Canelo insisted he deserved the win, but the boxing public saw Golovkin as the winner.

Canelo brings up a good point about Golovkin not facing a lot of great opposition. That’s true. He hasn’t fought a lot of good opposition, but it’s true that a lot of the top guys haven’t wanted to fight him. Golovkin had to wait three years before Canelo would fight him. Miguel Cotto, Felix Sturm and Sergio Martine never fought Golovkin.

Golovkin: “The people who support him and stand by him are swindlers just like him. How can one respect them? Of course, there’s no respect.”