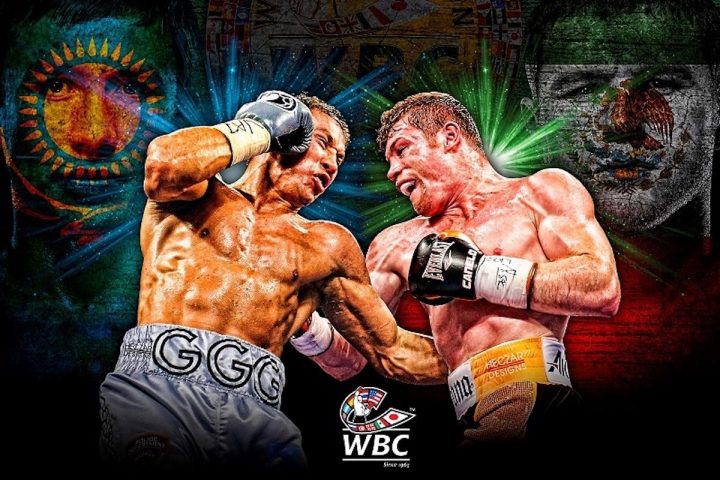 By Allan Fox: Andre Ward says Saul Canelo Alvarez has more tricks up his sleeves for the rematch with Gennady Golovkin, and he sees him coming out on top in their second fight. Ward believes that the trickier fighters tend to win the rematches, and for that reason he favors Canelo (49-1-2, 34 KOs) to beat IBO/WBA/WBC middleweight champion Golovkin (38-0-1, 34 KOs) on September 15 at the T-Mobile Arena in Las Vegas, Nevada.

Ward is a commentator on HBO, and he’s had words with Golovkin in the past. Ward wanted to face GGG a few years ago, but the fight never took place. There were a lot of boxing fans that wanted to see Ward fight GGG, but fortunately, the match didn’t get made. Ward ended up moving up to light heavyweight and finishing his career after twice beating Sergey ‘Krusher’ Kovalev in fights that were controversial. The boxing fans wanted to see Ward fight Adonis Stevenson, Dimitry Bivol and Artur Beterbiev, but he chose to retire instead of facing them. Kovalev has since been exposed by Eleider Alvarez, who knocked him out in the 7th round earlier this month on August 4.

”The first fight was extremely close,” Ward said to ESPN. ”Historically the guy who can do more, who has more tricks in his bags, so to speak, they typically do better in the rematch. And that is Canelo in this case. I think Golovkin is getting a little older [and] he’s got miles on him,” Ward said.

The Canelo-GGG2 rematch on September 15 on HBO PPV is supposed to solve the controversy from the first fight once and for all. Ward says Golovkin is getting older, but he actually fought like the younger guy. Boxing that involves cardio, and Canelo was fighting like a 40-year-old. The redheaded Mexican star was laboring in every round of the fight, and looking considerably older than Golovkin. Whether Canelo can fix his cardiovascular system enough to beat Golovkin is the million dollar question. Canelo’s poor cardio has been a prevalent problem since he turned pro in 2005.

Asking Canelo make him improvement in that area after 13 years as a pro would seem to be an impossible thing to do. Having tricks up ones sleeve doesn’t help a fighter if they’re handicapped with a poor cardiovascular system. That goes for any athlete in any sport. If you lack the cardio to compete on the same level as other athletes, then it puts you at a position where you’re constantly going to be beaten. Fortunately for Canelo, the scoring system in boxing is subjective and often based on the whims of the judges. This isn’t like the NFL, NBA or tennis where the system is judge-proof. In boxing, the scoring from judges often makes little sense. The decisions are given to the more popular fighter.

Golovkin was the better fighter of the two in the first fight on September 16, 2017 in Las Vegas, Nevada. It was close, but Golovkin looked to be the better fighter of the two. The judges scored the fight a 12 round draw that was quite controversial. To this day, the fight is viewed as a robbery. It was close, like Ward says, but it was also a fight that had a clear winner in Golovkin. It’s unclear what Ward’s opinion is of who he felt should have won the fight. He appears to be sitting on the fence by not saying who he felt was the winner of the first fight.

“I think Canelo is going to make the adjustments and show a different side, and could possibly get his hand raised,” Ward said.

“It’s tricky. That’s a heavy coat to put on somebody, that’s a heavy accusation,” Ward said about Canelo’s positive tests. ”He did come up dirty, that’s his fault. He has to own it, that’s why he’s getting the backlash that he’s getting, and I’m just sensitive with those kind of things because I have my opinion but, you know, I kind of reserve jumping out there before I get all the facts.”

It’s unknown what Ward would feel like if he had fought Canelo, and then the Meixcan fighter ended up testing positive twice for clenbuterol five months after their fight. Would Andre Ward take an ambivalent stance about the two positive tests from Canelo or would he be upset about it and suspicious and upset like Golovkin is? We’ll never know. Golovkin is the one who fought Canelo last September, and now he’s about to fight him a second time after he tested positive for the performance enhancing substance clenbuterol. You can argue that it’s tough for an HBO commentator like Ward to be asked about a popular fighter like Canelo testing positive for clenbuterol. It puts Ward in the hot seat, because Canelo is valuable fighter to HBO Boxing, and he’s going to be around for a long, long time on the network. Canelo is only 27-years-old. Asking Ward to comment about a popular HBO fighter like Canelo is putting him on the spot, because Canelo is likely going to be around for another 10 years before he wraps up his career. Canelo might not ever be the best fighter at 160, but he’ll always be popular due to his large fan base in the United States and Mexico. There are arguably better fighters than Canelo in Golovkin, Jermall Charlo, Daniel Jacobs and Billy Joe Saunders, but none of those guys have the same kind of following as he does.

”I’m glad they caught what they caught with Canelo,” Ward said. ”I don’t know the details, but again, you would hate for a guy to be on something and then go in there and hurt somebody.”