Sanchez says he’s hoping Canelo won’t choose to run from Golovkin for 12 rounds when they battle each other in fight No.2 on September 15 at the T-Mobile Arena in Las Vegas, Nevada. Unfortunately, Sanchez thinks Canelo is going to run the whole time, and the fight is going to go 12 rounds. He doubts that Golovkin will be able to knockout Canelo due to his movement that he’ll be using all night long.

Sanchez doesn’t believe Canelo is going to back up his tough talk of wanting to stand and trade with Golovkin, because he once he feels his power, he’ll be on the run to keep from getting hit. As such, the fight will play out a lot like the previous one did with Canelo only fighting hard for brief spurts at the start of each round, and then spending the next 2 ½ minutes on the run to keep from getting tagged hard by the bigger, stronger and more experienced Golovkin.

“This is the first rematch in his career,” Abel Sanchez said to Fighthub about Golovkin’s fight against Canelo Alvarez on September 15. ”It’s a fight against a guy he know well. If they [judges] wrong him [Golovkin] again, then the sport suffers,” Sanchez said about the judges. ”If they screw this up again, then it’s the state of Nevada. “There’s nothing we can do. All we can do is just fight. Hopefully this time the powers that be will select judges that aren’t biased and that are going to score the fight as they see it instead of having their scorecards already written out,” Sanchez said.

It would be in GGG’s best interest to jet after Canelo each time he takes off running like he did in his fights against Kell Brook and Daniel Jacobs. Golovkin did a good job of tracking those two fighters down and forcing them to trade with him. If Golovkin could do that against those fighters, then he can surely do that against Canelo. Golovkin just needs to be willing to take the occasional counter shots from Canelo because that’s the price he’s going to need to pay each time he puts a load of pressure on the 27-year-old Mexican star.

While Canelo is considered the challenger against IBO/WBA/WBC middleweight champion Golovkin like he was last time, he’s actually viewed as the champion as far as the promotion of the fight goes. Canelo has his name appearing in front of Golovkin in the promotion of the fight, and he’s viewed as the champion despite the fact that he hasn’t held a world title belt since he vacated his World Boxing Council middleweight title in 2016 after the WBC ordered him to face Golovkin. So instead of Triple G going into the September 15 fight as the champion, Canelo is basically the champion. That mean Golovkin will need to make sure he beats Canelo badly and possibly knocks him out if he doesn’t want o wind up getting another 12 round draw like he did in the first fight.

For GGG’s sake, he needs to come into the rematch with Canelo in a hyper-aggressive way, because he’s not going to beat him by standing on the outside and boxing him again. There’s an unwritten rule in boxing: you don’t beat the A-side fighter by out-boxing him. The only way to beat the popular star fighter is by whipping them so badly that the judges don’t dare score the fight in an odd way like we saw in the previous fight.

”What happened to Canelo’s body shots? You can’t punch someone when they’re running, and Canelo was running,” Sanchez said when asked why Golovkin didn’t throw more body punches against Canelo last September. ”It’s hard for Golovkin to throw his punches when Canelo is running. Canelo knocked out Liam Smith with a body punch. That’s supposedly his favorite punch. Why didn’t he throw it against Golovkin to the body? He didn’t. If he [Canelo] stops and fights, I can see the body shots coming from both guys. I hope it’s not in spurts and punches in desperation. I hope he punches where he wants to knock Golovkin out. Yeah, they were effective, but they were slaps, and Golovkin said they were slaps and then he ran away,” Sanchez said.

It’s not realistic to assume that Canelo will fight differently than he did in the previous fight because he simply can’t do it. The only thing Canelo knows how to do is fight like Floyd Mayweather Jr. when he’s facing good opposition. That means Canelo will spend much of the time resting with his back against the ropes looking to pot shots, and then he’ll take off to try and escape the situation. It worked for Canelo dodge a sure thing loss against Golovkin when the judges rewarded him with a controversial 12 round draw. Canelo isn’t going to stand and have it out with Golovkin and risk getting hurt. Canelo isn’t that type of fighter.

”I hope he does what he says right now, I hope it’s indicative to what he’s going to do, because I think the fans are really fed up with all the BS and the fans want to see a fight,” Sanchez said. ”I think we owe them that. I think Canelo owes them that. We try to put Golovkin into the type of fight that entertains, but you can’t entertain if the other guy doesn’t want to fight. What kind of adjustment can you make against a guy that is running unless you lunge at him or jump at him. [Aleksandr] Usyk was trying the same tactic Canelo was. The difference was he stood there and tried to knock Gassiev out and kept Gassiev from doing what he needed to do. He [Usyk] neutralized us. Canelo didn’t try to do that. He’s trying to do that now. If he does it, he’ll be within range. That way, hopefully they’ll hit each other. I don’t know if he can hurt Golovkin. Maybe he can. Imagine he didn’t hit him,” Sanchez said about Golovkin not landing his power shots on Canelo last September. “Imagine when he hits him. Let them go at each other and let’s see what he says then. They talked a big fight, Oscar [De La Hoya] and everybody concerned. Golovkin kept quiet; they’re BS-ing us and the fight fans. I think it goes 12,” Sanchez said in predicting that the Canelo vs. Golovkin II fight goes to decision instead of a knockout. “He [Golovkin] can’t get a knockout against a guy that is running away from you,” Sanchez said.

Sanchez’s comparison of Canelo to IBF/WBA/WBC/WBO cruiserweight champion Oleksandr Usyk is a million miles off. Those two are completely different fighters. Usyk was throwing nonstop punches against the shorter, slower Murat Gassiev in beating him by a one-sided 12 round unanimous decision in the World Boxing Super Seires cruiserweight finals. Usyk was throwing constant shots without tiring out. Canelo can’t do what Usyk did due to his poor engine, his short 5’8” height and his short arms. If Canelo tried to fight like Usyk in throwing a lot of punches, he’d gas out and get knocked out in no time flat. That’s why in the first fight, Canelo would throw a few shots, and then take off running so that he didn’t have to fight Golovkin in a slugging match.

“Did you see clips before the last fight?” Sanchez said about Canelo hitting the heavy bag with punches that appeared to be meant to be body shots. “He did the same thing. Once he feels the power like he did in the first fight, he’s not going to stand with us.”

Of course, Canelo isn’t going to stand and fight Golovkin, because he physically can’t do it. The types of fighters that Canelo stands and fights are the less talented fighters such as, Alfredo Angulo, James Kirkland, Amir Khan, Liam Smith, and Josesito Lopez. Canelo doesn’t stand and fight good opposition because he lacks the conditioning to fight like that against guys that can hit him back. 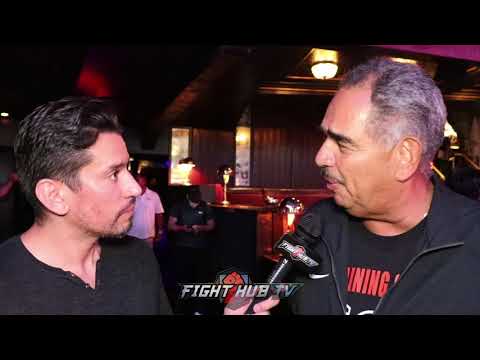