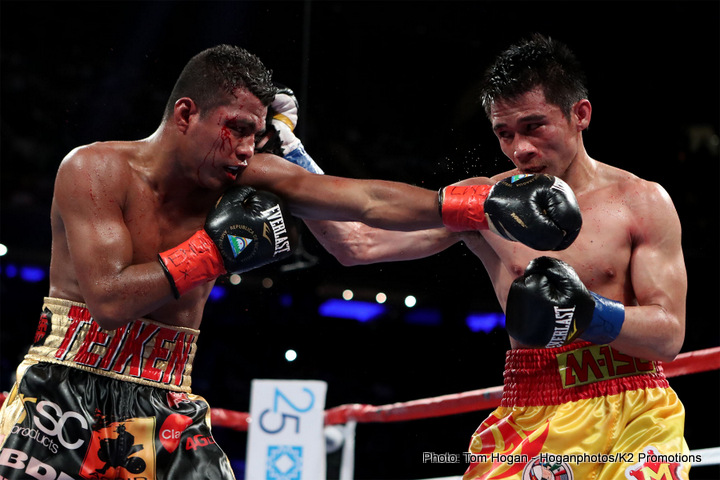 By Dan Ambrose: Roman ‘Chocolatito’ Gonzalez (46-2, 38 KOs) could be making his comeback on the undercard of Saul Canelo Alvarez vs Gennady ‘GGG’ Golovkin II on September 15, according to promoter Tom Loeffler on HBO pay-per-view at the T-Mobile Arena in Las Vegas, Nevada.

Loeffler says the 31-year-old Chocolatito could be back on the undercard against an opponent still to be determined. A couple of names have been mentioned as possibilities for Gonzalez, but nothing is definite at this point. It might be risky putting Gonzalez in with anyone with talent or punching power from the 115 lb. weight class. He needs a small guy for him to dominate like he used to.

The casual boxing fans will like the idea of Chocolatito fighting on the Golovkin vs. Canelo II undercard, but I’m not so certain that the hardcore fans will think the same thing. Gonzalez has looked totally shot in his last three fights, and it’s not going to get the knowledgeable fans excited at the prospects of seeing him beat up by someone else. Loeffler should be focusing on getting a talented fighter still in his prime to fight on the undercard like Rungvisai or Juan Francisco Estrada. Those guys would get a lot of boxing fns excited about seeing them on the Golovkin-Canelo II underard. I can’t say the same thing about Chocolatito. He’s looking like a guy that is on his last leg. It’s not just the beating Chocolatito took in his last two fights against Rungvisai. It’s the punishment that Cuadras gave to him. Gonzalez’s face looked almost unrecognizable at the end of the Cuadras fight. Gonzalez’s defense was nonexistent in that fight. In Gonzalez’s next fight against Rungvisai, Cuadras correctly predicted that he would lose to the Thailand fighter.

What’s clear is Gonzalez needs a fairly easy mark for this bout because he’s taking a real pounding in each of his last three fights against Srisaket Sor Rungvisai and Carlos Cuadras. Gonzalez can’t take another beating like the ones he took in those last three fights. He probably should have given up on the idea of fighting at 115 after the punishment Cuadras inflicted on him in 2016, but he chose to stay in the super flyweight division and test himself against Rungvisai.

Gonzalez looks like he’s already being forgotten in the super flyweight division because he’s unable to perform at a high enough level to beat the top guys. At this point, you’d be hard-pressed to pick a champion at 115 that Gonzalez can beat. I don’t think he can beat any of the guys. Loeffler needs to keep Gonzalez away from the following super flyweights if he knows what’s good for him: