Prograis, 29, appeared to carry the 31-year-old Velasco for the first six rounds in fighting at a slow pace and not going for the kill. 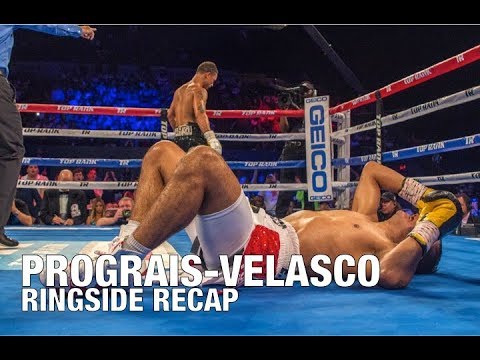 It was clear that Prograis wasn’t going all out against Velasco, as he was fighting at a slow pace and he was throwing a lot of body shots instead of going after him to try and score a knockout. Unlike the way Prograis fought in his previous fight against former IBF/WBA light welterweight champion Julius Indongo, he didn’t look like he wanted to end the fight. It appeared that Prograis was focusing on trying to score a stoppage by throwing body shots.

In the first three rounds, Prograis was hit frequently by Velasco. Prograis still did more than enough to win the rounds, as he was nailing Velasco with the much harder shots. Still, Prograis was getting nailed a lot by an average fighter that shouldn’t have been connecting with shots. When Prograis started to unload with some of his heavier shots, the fight stopped being competitive. It was a slaughter.

In the 5th round, Prograis landed a crushing body shot that sent Velasco down. To Velasco’s credit, he got back to his feet and continued to take punishment. Velasco was still trying, but he wasn’t able to keep Prograis off of him.

Top Rank might be more willing to finally let Ramirez fight Prograis after tonight. Prograis is going to need to fight with more intensity in the World Boxing Super Series tournament because the longer his fights go, the more chances of him suffering an injury, which he can’t afford. Moreover, it would be best for Prograis to KO his opponents quickly in the tournament to win over more boxing fans.