Usyk After Skipping Workout: “You Must Keep People Hungry!” 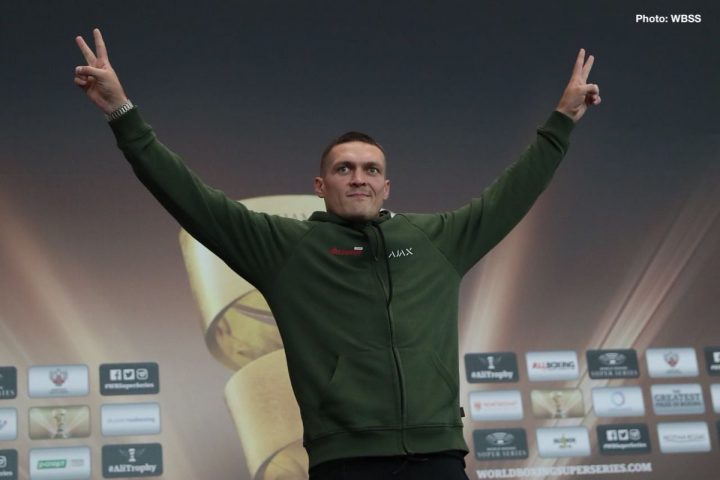 Usyk, however, did surprisingly not do any of the usual skipping, shadow boxing or pad work, but instead waved and bowed in front of the hundreds of fans at the Oceania Shopping Mall.

Even though Usyk is fighting in his opponents home country there was a lot of noisy support for the Ukrainian.

“I came, entertained the crowd a bit and did some interviews, but I did not show any boxing today,” said Usyk. “You must keep people hungry, not overfeed them. On Saturday people will see everything!”

Murat Gassiev did the classic workout and threw t-shirts into an ecstatic crowd.

“It was a good training in front of a lot of people, but I am looking forward to seeing many more on Saturday!”

200 journalists from all over the world have accreditation for Saturday’s final at the Olympic Sports Complex in Moscow. Over 10.000 tickets have been sold and 20.000 are expected for the historic Cruiserweight final.

The winner of Usyk-Gassiev will be the first boxer ever to win the Muhammad Ali Trophy and unify the cruiserweight titles in the four belt era.

The mouthwatering final will be a key event during a weekend of boxing activities in the Russian capital in celebration of International Boxing Day after Comosa were invited to bring and supervise the first final of The Greatest Prize in Boxing – The Ali Trophy – to the festival of pugilism.

“I can’t wait to fight again,” said Briedis (23-1, 18 KOs). “I’m looking forward to a quality World Boxing Super Series event and I am sure that the 21st of July will make a great night of boxing for the fans in Moscow and all over the world.”

The former WBC World Champion won his quarter-final in the quest for the Muhammad Ali Trophy against Mike Perez by unanimous decision and continued to face top-seed Usyk.

The Latvian sports hero did not fail to impress in a ‘Fight Of The Year’-contender as the semi-final was dubbed.

Briedis was defeated in a close and thrilling contest and gave what Usyk called; ‘the toughest fight of my career.’

The 33-year-old will be on standby to enter the final in Moscow in the unlikely scenario of one of the original participants being unable to compete.

In his fight on the Moscow undercard, Briedis is up against France’s Brandon Deslaurier (11-1-1, 1 KO).

“I’m very excited to come to Russia and compete against a world class fighter like Mairis Briedis. But people must not underestimate me. I am coming to Russia to win and beat Mairis Briedis,” said Deslaurier.

Everything is on the line for Aleksandr Usyk and Murat Gassiev in the Ali Trophy Cruiserweight Final in Moscow: The winner in Moscow on July 21 will be the first one ever to take home the Muhammad Ali Trophy. The first cruiserweight ever to unify the titles in the four-belt era. The winner will also add RING Magazine’s vacant cruiserweight championship belt.