Luis Ortiz vs. Joe Hanks on July 28 at Staples Center 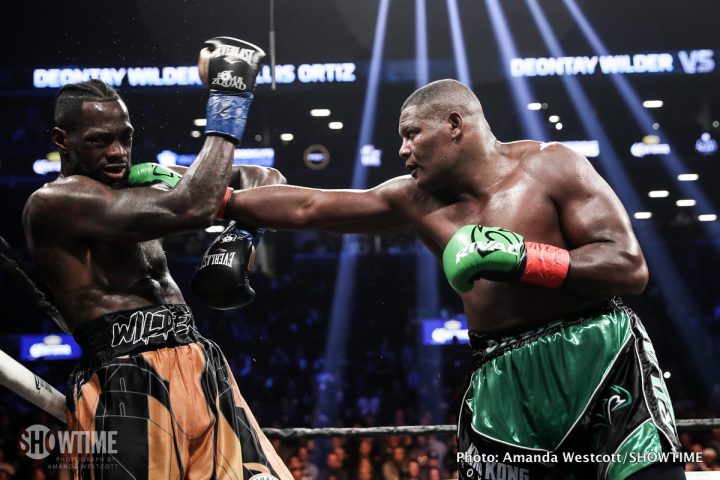 By Jim Dower: Former heavyweight world title challenger Luis ‘King Kong’ Ortiz (28-1, 24 KOs) will be looking to bounce back from his 10th round knockout loss to WBC heavyweight champion Deontay ‘Bronze Bomber’ Wilder when he faces Joe Hanks (22-2, 14 KOs) in a 10 round fight on the undercard of WBC lightweight champion Mikey Garcia’s unification match against IBF champion Robert Easter Jr. on July 28 at the Staples Center in Los Angeles, California. Showtime Championship Boxing will be televising the card.

The World Boxing Council wanted Ortiz o face Dillian Whyte in a WBC title eliminator. The fight failed to happen after Whyte chose to go in a safer direction against former WBO heavyweight champion Joseph Parker, who he’ll be fighting on July 28 at the O2 Arena in London, England. Ortiz would have been a very tough fight for Whyte, who for once in his career seemed extremely reluctant to take on an opponent.

Although Whyte would later say that Ortiz was an old man, he still seemed to want no part of the well-schooled Cuban southpaw. Ortiz hits harder than Whyte and has better boxing skills. It would have been a very difficult fight for Whyte had the fight taken place.

Whyte and his promoter Eddie Hearn’s decision not to take the fight with Ortiz showed that the Cuban talent is still very much avoided even as he’s nearing 40. Ortiz was lucky that his management was able to get the fight against Hanks because it could have been much worse. The only top fighter that showed interest in fighting Ortiz was Wilder, and he almost got knocked out by him. Ortiz is more trouble than he’s worth at this point.

Ortiz, 39, gave Wilder all he could handle in hurting him badly in the 7th round in their fight on March 3 at the Barclays Center in Brooklyn, New York. Ortiz came very close to knocking Wilder out in the 7th, and he possibly could have finished the 6’7” fighter off in the 8th if the New York State Athletic Commission hadn’t delayed the start of the round in order to check out the status of the Bronze Bomber. Wilder came staggering out of his corner and walked over to the side of the ropes to be briefly examined by one of the New York Commission’s members. By the time the 8th round finally started, Wilder had recovered enough to make it out of the round without being hurt further.

Despite losing to Wilder, Ortiz is ranked No.4 by the WBC and in position to soon get another title shot of if he can continue to win and put his loss behind him. Beating the 35-year-old Hanks will be a good victory for him.

Hanks’ career isn’t going so well as of late. He’s fought just once in the last four years. He last fought in December in defeating Joel Caudle by a six round unanimous decision. Before that fight, Hanks lost to Derric Rossy and Andy Ruiz Jr. Hanks was knocked out in the 4th round by Ruiz Jr. in July 2013. Rossy beat Hanks by a 10 round majority decision four years ago in 2014. It seems that the losses to Rossy and Ruiz Jr. took the steam out of Hanks’ career, as he stopped fighting as much after those losses.

This fight is Hanks’ big chance to get his name on the heavyweight map by beating Ortiz. If Hanks can defeat Ortiz, it’ll get him a top 10 ranking and he’ll be able to go from there to some bigger fights. Unfortunately it’s not going to be easy for Hanks to win this fight because Ortiz is way above his level. Hanks doesn’t have the same pedigree that Ortiz has with his extensive background on the Cuban boxing team.