Lucas Matthysse vs. Manny Pacquiao on ESPN+ on July 14 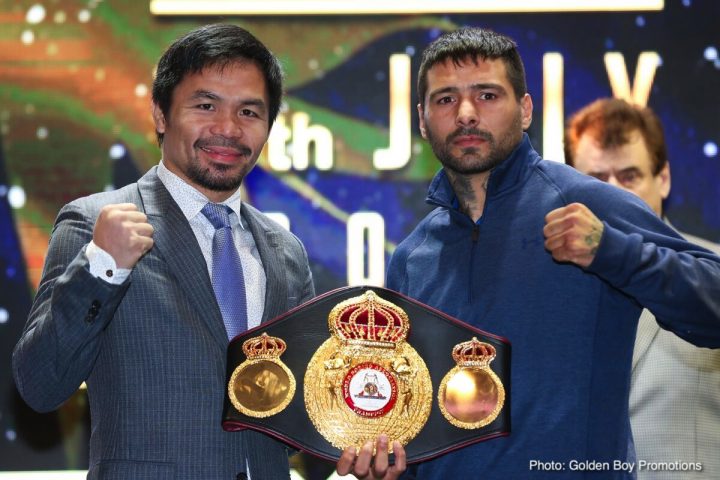 By Jeff Aranow: Manny Pacquiao vs. Lucas Matthysse will be shown on ESPN+ subscription app in the U.S on April 14, according to ESPN. This means that for boxing fans to see it, they’ll need to subscribe to the app.

It’s going to be a good test of how much the U.S boxing public are still interested in the career of the 39-year-old Pacquiao, because this is a fight that would likely attract a fair amount of interest from fans if it were shown on regular ESPN without the fans having to pay to see it.

This is a hard fight to make a prediction about a winner. Matthysse had problems beating his last opponent Tewa Kiram last January. Matthysse was getting out-boxed by Kiram until the 8th when he finally landed some hard punches o knock the Thailand fighter down twice to get a stoppage. That version of Matthysse will be hard-pressed to beat any of the top fighters in the division. Pacquiao clearly isn’t among the true top fighters in the welterweight division. Pacquiao is a good fighter still, but he would be expected to lose against the top dogs Keith Thurman, Shawn Porter, Danny Garcia and Errol Spence Jr.

Being asked to subscribe to see it might be a little too much for fans because they might only want to see the Pacquiao-Matthysse fight, and not be interested in the other fights on ESPN+, which has a lot of Top Rank fighters like Terence Crawford, Jeff Horn, Gilberto ‘Zurdo’ Ramirez, Vasyl Lomachenko, Jose Ramirez, and Alex Saucedo.

There’s little chance that boxing fans would pay to see Pacquiao (59-7-2, 38 KOs) fight Matthysse (39-4, 36 KOs) on ESPN PPV. That’s not a PPV worthy fight because Matthysse is viewed as a paper champion, and Pacquiao is an inactive over-the-hill fighter, who is coming off of a 12-month layoff and a loss to Jeff Horn in July of 2017. Pacquiao’s 1-year layoff makes him a poor option for a world title shot if you’re looking at the fight in terms of a sporting event. In a sporting event, active fighters that are winning should be the ones that get title shots. In Pacquiao’s case, he lost his last fight to Jeff Horn and he’s been out of the ring for exactly one year. The World Boxing Association has Pacquiao rated No.1 despite his loss and 1-year of inactivity. The WBA doesn’t say what went in their decision making to rank Pacquiao number 1 with their organization, but it sure makes them look bad that they’ve given him that kind of raking after a loss and a yearlong layoff. Pacquiao should be ranked a lot lower. His number 1 ranking makes him look like he was put at that high ranking due to his popularity and past accomplishments rather than what he’s done lately.