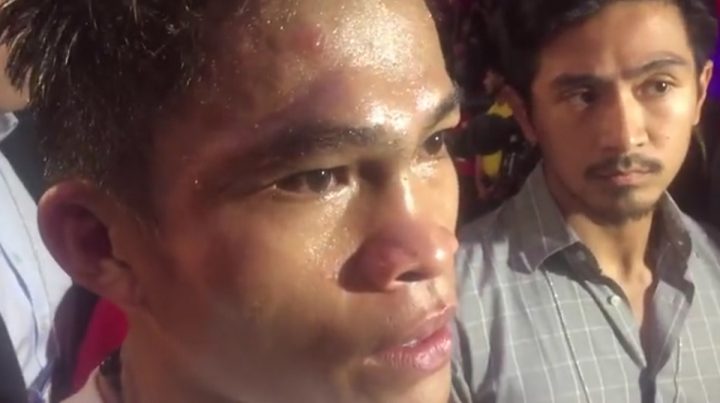 By Chris Williams: Jerwin Ancajas (30-1-1, 20 KOs) will be making a defense of his International Boxing Federation super flyweight title against an opponent still to be determined on ESPN on September 14 on the undercard of WBC light welterweight champion Jose Ramirez vs. Antonio Orozco at the Save Mart Arena in Fresno, California.

It’s hoped that Ancajas will step up finally and start facing better opposition than he’s been doing. Ancajas didn’t take part in either of the last SuperFly competitions, which is a disappointment because he would have been tested against the likes of Roman ‘Chocolatito’ Gonzalez, Srisaket Sor Rungvisai or Juan Francisco Estrada. In Ancajas’ recent fights, he’s defeated these fighters:

Since Top Rank started co-promoting Ancajas, he seems to be going downward in terms of the opposition he’s been facing. Ancajas’ last three fights have been mismatches against Israel Gonzalez, Jamie Conlan and Jonas Sultan. There’s nothing wrong with a fighter having an occasional mismatch, but when they have three in a row like Ancajas, it’s a major disappointment because he’s not taking his career to the next level. Ancajas is a good fighter, but with the way that he’s being matched so weakly, it makes you wonder whether he’s as good as some people think. If Ancajas wants to be seen as the best in the 115 lb. weight class, then he’s going to need to encourage Top Rank to start putting him in against the other top guys like Srisaket Sor Rungvisai, Juan Francisco Estrada, Khalid Yafai, Roman Gonzalez, Donnie Nietes and McWilliams Arroyo. At this point there’s a huge question mark hanging over Ancajas’ head in the boxing world due to the weak way that he’s been matched.

If Ancajas doesn’t have the talent to be one of the best, it would be better for his promoters to find it out sooner rather than later, because then they could move on and sign the fighters that are able to beat him.

Top Rank promoter Bob Arum wants to match WBC 140 lb. champion Jose Ramirez (22-0, 16 KOs) against fellow Top Rank fighter Alex Saucedo (28-0, 18 KOs) in the near future and he believes the two of them will sell out the Staples Center in Los Angeles, California, according to Lance Pugmire. If Arum is going to make that fight, he’ll need to do it before the World Boxing Super Series 140 lb. tournament is over with, because once it ends, Ramirez is going to have huge pressure on him to face the likes of interim WBC light welterweight champion Regis Prograis and/or WBC mandatory Josh Taylor. Both of those guys would have an excellent chance of defeating the 25-year-old Ramirez, who looks pretty limited and very beatable. Up until recently, Prograis was trying to get a fight against Ramirez, but he ran out of time when the fight was dragged out.

“It will be a dream fight,” Arum to the latimes.com about a fight between Jose Ramirez and Alex Saucedo.

Saucedo is going to be fighting WBO light welterweight champion Maurice Hooker by late October. Saucedo will need to win that fight and the World Boxing Organization belt for a fight between him and Ramirez to be worth anything. If Saucedo loses to Hooker, then Arum’s vision of the Ramirez-Saucedo fight selling out Staples in Los Angles will be little more than a pipe dream. That fight won’t sellout the Staples Center under those conditions. They might sellout the Save Mart Arena, but Ramirez always sells a lot of tickets for his fights in that venue.

Saucedo notes that Ramirez fights lesser guys, who he doesn’t think too highly of. These are the guys that Ramirez has been padding his resume against since 2016:

Those are some good B-level fighters, but obviously they’re A-level talents and you have to wonder why Top Rank isn’t stepping Ramirez up. Is it the same situation as we’re seeing with Ancajas and WBO super middleweight champion Gilberto ‘Zurdo’ Ramirez. Neither of those two have stepped it up against high caliber opposition as of yet.

“To me, there’s nothing personal. He’s the champion. That’s who you want to fight. We’ll make it personal in the ring,” Saucedo said to the latimes.com about the lesser fighters that Ramirez has been fighting.

Ramirez was previously scheduled to face #14 WBC Danny O’Connor this month in a voluntary title defense against the fringe contender, but the fight was canceled after O’Connor ended up being hospitalized for dehydration while trying to make weight for the fight. It looked bad that Ramirez didn’t enter the World Boxing Super Series 140-pound tournament to compete against talented like Regis Prograis (22-0, 19 KOs), Josh Taylor and Kiryl Relikh. Ramirez points out that he’ll be defending his title against the unbeaten Antonio Orozco (27-0, 17 KOs) on September 14, and then he can fight a unification match against the winner of the Maurice Hooker vs. Alex Saucedo fight with the WBO title on the line. Ramirez then says he can fight the winner of the WBSS 140-lb. tournament.

“If I defend my title, there’s a unification fight and then the tournament will be over and I can fight the winner,” Ramirez aid. ”The WBSS doesn’t decide the best fighter. It’s just a great tournament for guys who don’t have the opportunities that I already have.”

A lot of people would disagree with Ramirez about his opinion that the WBSS tournament doesn’t decide the best fighter. I think it does. Regis Prograis is considered by many fans as the guy that will win the WBSS tournmanet, and if he does, it’ll be him that is viewed as the best fighter at 140, not Ramirez.

Well, I think a lot of boxing fans would disagree with what Ramirez is saying about him having opportunities that other fighters don’t have. Ramirez’s canceled fight against near bottom fringe contender looked like a cherry-picking move on his part. Now that the fight is over, Ramirez is fighting Orozco, a fighter who was a controversial 10 round unanimous decision over past his prime Humberto Soto in 2015, and he’s done precious little since that fight. Orozco’s last fight was against journeyman Martin Honorio (33-12-1). At one time, Orozco was seen as a future star, but after his HIGHLY questionable win over Soto in 2015, his career has stalled out and he’s not gone anywhere. Orozco is now 30-years-old and finally fighting for a world title for the first time. Instead of being viewed as a top guy with a great future by boxing fans, Orozco is seen as yesterday’s news, a fighter whose career has failed to launch. Ramirez can beat Orozco, but it won’t mean much at this point. It’s too late. Soto already did the job against Orozco, but wasn’t given the win. There’s no upside in Ramirez beating Orozco and Saucedo. The fighters that are considered the guys to beat at 140 is Prograis and Taylor.