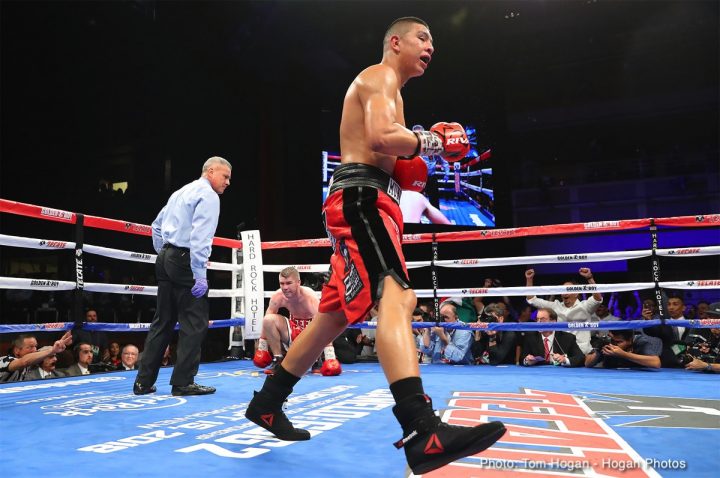 The scores were 116-111, 119-110, and 119-108. Boxing News 24 scored the fight 110-110. Munguia, 21, knocked the 29-year-old Smith down in the 6th round after nailing him with a big left hand to the head. Smith showed a lot of hard and a great chin in making it out of the round and going the remainder of the fight without getting knocked out. Munguia hit Smith with monstrous shots from rounds fourth rough twelve after taking over the fight after the third.

Smith took a lot more punishment against Munguia than he did in his loss to Saul Canelo Alvarez in 2016. Smith was better prepared to take the punishment in order to go the distance. Smith got away with a lot of low blows tonight without being penalized. The referee Russell Mora should have stepped in and taken a point away from Smith at some point to get him to control his fouling in the fight, as it looked at times like he was intentional landing the shots.

This was an interesting fight despite the scores being one-sided in Munguia’s favor. Smith made it a thrilling fight with his heart and toughness. Smith wasn’t going to give up for anything, It didn’t matter to Smith tha he was over-matched. He wanted to fight hard and that’s why he did. He refused to get knocked out by Munguia. The key to victory for Munguia tonight was his punching power and the pressure that he was putting on Smith. Munguia’s stamina helped him in the second half of the fight after Smith faded. Smith was strong early in taking the first three rounds, but Munguia took over the fight with his superior stamina.

Munguia’s defense was really poor, as was his hand speed, Smith was able to land some big shots due to Munguia’s wide open defense. Unfortunately for Smith, he wasn’t able to hurt Munguia with his shots. This enabled the Mexican fighter to take the fight to Smith.

Smith came into the fight as a huge underdog, but he did a good job of at least getting a moral victory in going the distance. Munguia was expected to stop Smith, but he failed to do so. Smith refused to be knocked out. Perhaps the main reason why Smith was able to go the distance was the lack of hand speed from Munguia.

To his credit, Smith continued to fight hard in the second half of the contest despite the fact that he was getting wailed on by Munguia. Smith showed incredible heart in landing some nice shots in rounds 9 through 12. Smith’s problem is he didn’t have any punching power to speak off to get Munguia off of him. Munguia was landing tremendous shots to the body and head in the final four rounds. Smith took the punches, and kept firing back his own.

You’d be hard-pressed to give any round after the 3rd. It was all Munguia from the 4th, as he was unloading on Smith with some big shots and connecting well to the body.

For Smith, it was a moral victory for him to go the full 12 rounds against a big puncher like Munguia. Smith was able to go the distance and expose Munguia in some ways. Saul Canelo Alvarez has sopped Smith in the 9th round in their fight two years ago in 2013. Munguia was hoping he would stop Smith before the 9th round to show that he could KO him before Canelo could. Smith showed that he could take the best shots from Munguia. He still lost the fight, but at least he went 12 rounds.

”Canelo is a better fighter, who hits harder than me,” Munguia said after the fight when explaining why he couldn’t knockout Smith.

Munguia is being modest when he says Canelo hits harder than him. I don’t believe that to be the case. Munguia hits harder, but he’s a lot slower, and that makes his shots easier to take because his opponents can see them coming.

There’s no question that Munguia got the ‘W’ tonight over Smith, but unfortunately the fight showed his flaws. The number one flaw that Munguia has is his lack of hand speed. Smith looked like nothing special in the fight. He was throwing back without much power. The only reason Smith was able to go the distance is because Munguia wasn’t able to get enough speed on his shots to get the knocked. Still, Munguia was really pounding Smith with his heavy hands, and he came close to knocking him out a fee times.

Munguia should forget about trying to get fights against Canelo Alvarez and Gennady Golokvin right now. He’s clearly not ready for either of those middleweights. Those guys would have knocked him o if they had fought him tonight. On a side note, Munguia rehydrated to 176 pounds on Saturday after weighing in at 153 lbs. on Friday at the weigh-in. Munguia rehydrated 23 lbs. overnight. That’s an incredible amount of weigh for Munguia to put back on. At some point it’s going to be difficult for Munguia to keep making the 154lb. weight limit. It wouldn’t be surprising if Munguia is forced to move up to middleweight after two more fights. For his part, Smith rehydrated to 172 pounds, which might be one of the reasons why he gassed out so badly after round three. Smith needs to move up to 160 because he’s not going to beat any of the champions at 154 at this point. Smith needs to move up in weight to middleweight for better or for worse.

Munguia needs to straighten out his punches and work on his defense, and he’ll be100 percent better than he is right now. Obviously, Munguia is never going to need to change his lack of hand speed, but he can do something about his defense and correcting his mistake of throwing looping shots.

It might be better that Munguia didn’t knockout Smith, because if he had, Golden Boy Promotions likely would have thrown him into the deep waters against the likes of Canelo Alvarez, Jarrett Hurd, Jermell Charlo or Erislandy Lara.Munguia isn’t ready for those types of fighters. With Smith going the full 12 rounds, Munguia’s promoters will likely take him slowly and have him develop more the way they should be doing. Munguia needs change the power on his shots more and not just load up on his shots, which he does all the time. One of the reasons Smith was able to take Munguia’s power tonight is because he threw with the same power each time. Munguia didn’t vary the strength on his shots the way that good fighters do. He was trying to crush Smith with every shot he threw in the fight, and that wasn’t going to work when it came to landing head shots. Munguia is not going to accomplish a lot of all he’s going to do is load up on his punches. Munguia can’t get away with throwing bombs against Canelo, Golovkin, Jarrett Hurd and Jermell Charlo. Those guys would counter him and likely knock him out.

Munguia is still an interesting fighter to watch on HBO due to his punching power. He makes his fights interesting to watch due to the way he looks for knockouts. The upside on Munguia’s game is huge. If he can fix his defense and make a few more minor corrections, he could wind up unifying the junior middleweight division.

Smith took a boatload of punishment in this fight without quitting. You’ve got to give Smith a ton of respect in absorbing so many huge shots from Munguia because he was throwing with everything he had on each of his shots. Smith took a career’s worth of punishment tonight against Munguia.

In other fights on the card, World Boxing Association super featherweight champion Alberto Machado (20-0, 16 KOs) defeated his previously undefeated mandatory challenger Rafael Mensah (31-1, 23 KOs) by a 12 round unanimous decision. The scores were 120-107, 120-107 and 120-107. Machado knocked Mensah down in the 1st round with a right to the head. Machado could have knocked Mensah out in the later rounds, as he him hurt many times, but seemed to have mercy on him. Mensah would have been an easy knockout if Machado had wanted to get him out of there.

Mensah came into the fight with an inflated resume of victories that he picked up in his native Ghana. Mensah had faced poor opposition to get ranked #1 by the WBA. In hindsight, the WBA should have waited until Mensah beat a quality contender or two before they gave him a No.1 ranking with their organization. They did Mensah and the boxing public no favors in giving him an inflated ranking with their organization. Machado landed some huge shots in the fight to hurt Mensah. If Machado had turned on the gas in the later rounds, it would have been an easy KO win for him. Mensah looked like he didn’t belong inside the ring with Machado. 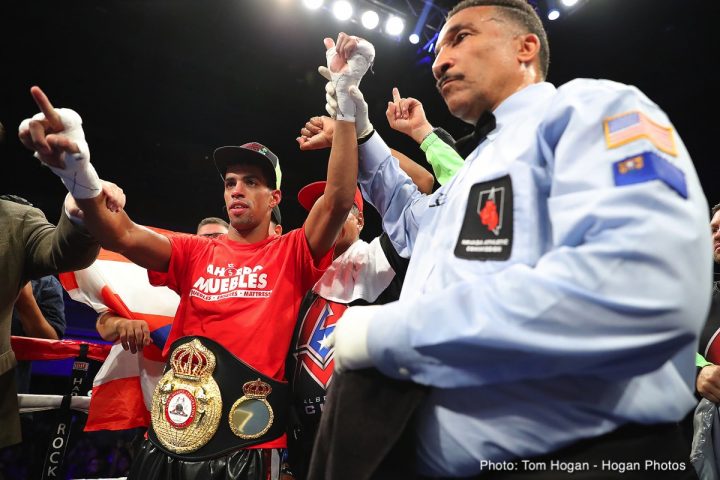 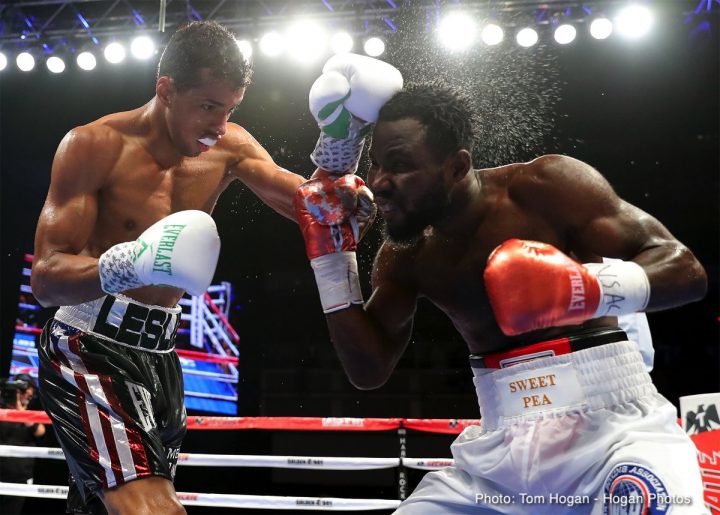 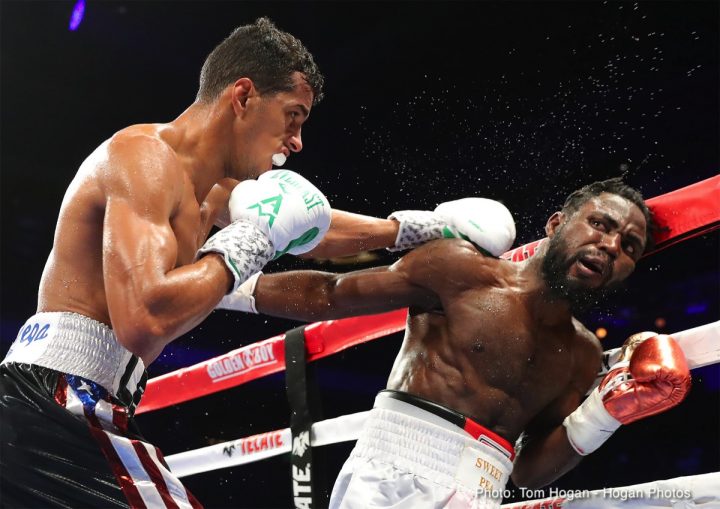 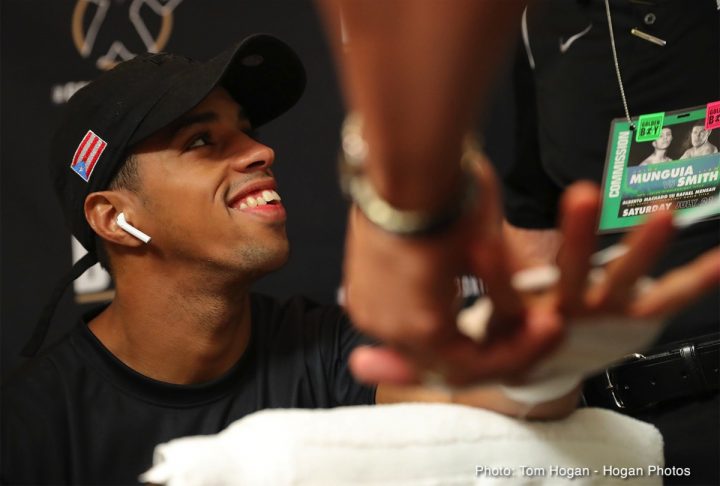 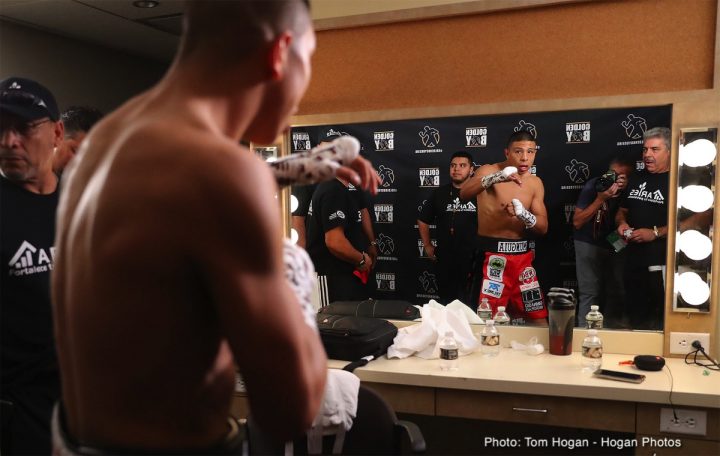 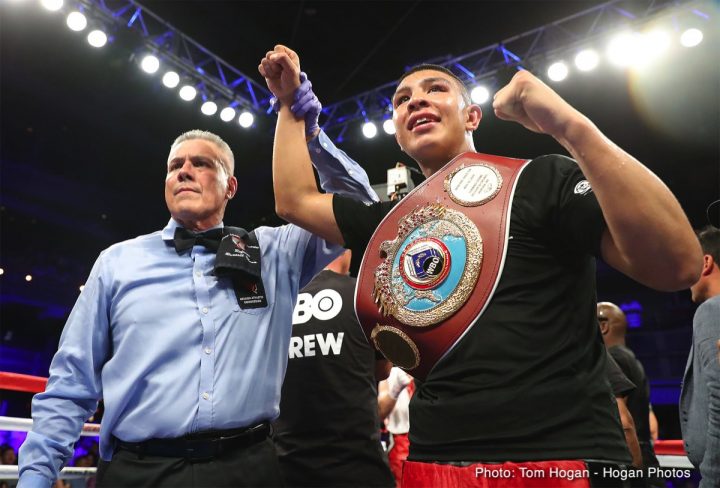 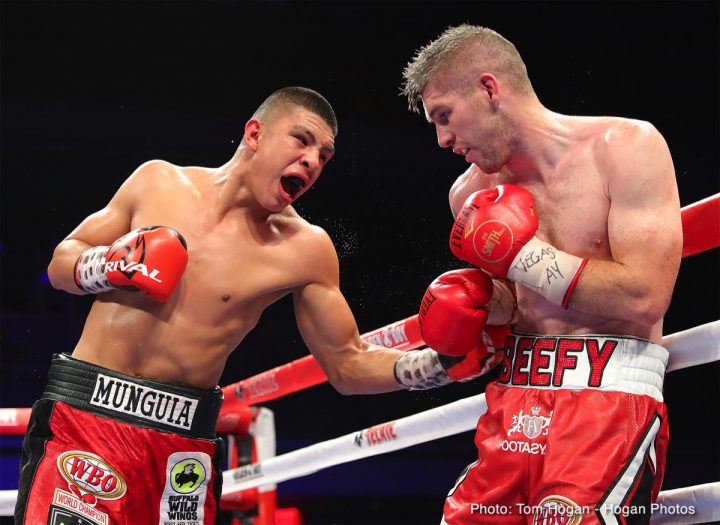 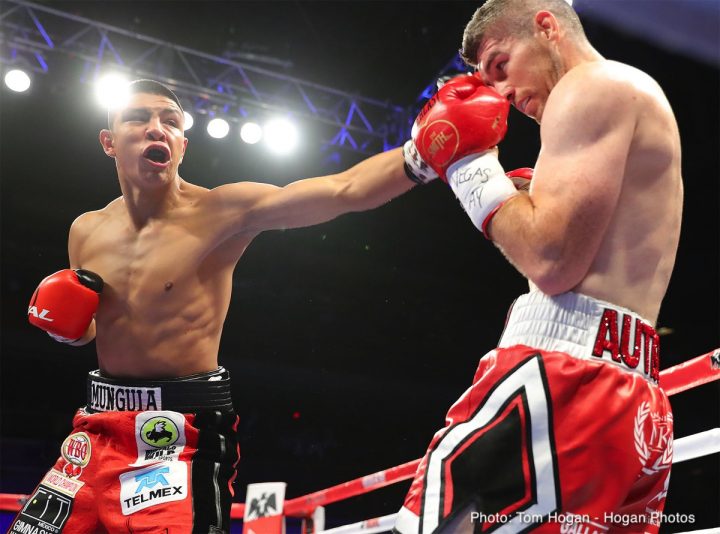