Errol Spence: Mikey Garcia is NOT going to beat me 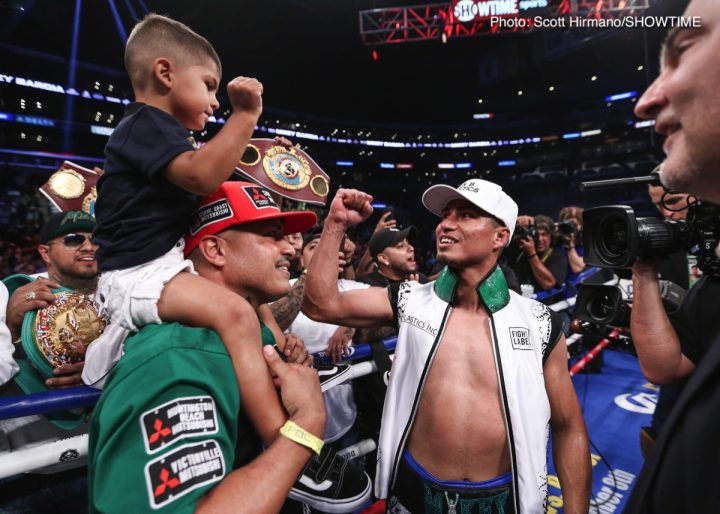 By Dan Ambrose: Errol Spence Jr. says he’s “licking his chops” in anticipating of facing Mikey Garcia in November or December on Showtime. Spence (24-0, 21 KOs) says there’s nothing Mikey can do to beat him, as his punching won’t be nearly enough to hurt him at 147. Spence, 28, feels that he can walk Garcia (39-0, 30 KOs) down or box him to get the victory.

It’s an easy fight for Spence in his mind. He doesn’t see anything Garcia can do to him that will trouble him and keep him from having his hand raised at the end of the fight. Spence’s thoughts are echoed by the boxing public, who see Garcia as heading toward an abyss. On paper, it’s a foolhardy move for Garcia to take the Spence fight, as he’s out of his league in every department you can picture.

The only plausible rationale for Garcia, 30, taking the fight with Spence is the huge amount of attention that he’ll receive from boxing fans. Garcia is making the same move that we saw former IBF welterweight champion Kell Brook make when he moved up to middleweight to challenge IBF/IBO/WBA/WBC champion Gennady ‘GGG’ Golovkin in September 2016. Golovkin easily stopped Brook in round five after fracturing his left eye socket. Amir Khan made a similar move in facing former WBC middleweight champion Saul Canelo Alvarez in 2016, and winding up getting stopped in the 6th. It’s possible that Mikey won’t make it past the sixth round like Khan and Brook failed to do when they stepped it up. It all depends on how motivated Spence is in trying to end the fight quickly.

Garcia was able to hurt Robert Easter Jr. last Saturday night with his left hook to produce a knockdown. However, he couldn’t keep him down, and the fight turned out to be very competitive. We saw the same thing in Garcia’s fight against former IBF light welterweight champion Sergey Lipinets last March. Mikey knocked Lipinets down in round 7, but he was unable to keep him down. Lipinets then came back to land a lot of punishing blows to the head of Mikey.

Mikey is serious about wanting to move up two weight classes to face Spence at welterweight in the end of the year. WBC lightweight champion Garcia defeated IBF lightweight champion Robert Easter Jr. (21-1, 14 KOs) by a 12 round unanimous decision to capture his IBF title at the Staples Center in Los Angeles, California. Other than the Spence fight, there are no chances for big fights for the remainder of 2018 for Garcia. If he stays at 135, he would be stuck facing the winner of the Luke Campbell vs. Yvan Mendy fight. Garcia fighting the winner of that fight wouldn’t interest the boxing fans in the U.S. It interest UK boxing fans, but not American fans. Campbell was beaten last year by former WBA lightweight champion Jorge Linares. Spence is the best option for Garcia for the remainder of 2018.

“He will be pound-for-pound No. 1 if he beats me, but it’s not going to happen,” Spence said about Garcia. ”He has great skills, but I see myself winning. I don’t really see anything that concerns me. He’s technically good, but I don’t see him hurting me at 147.”

It’s unknown what kind of game plan Garcia could come up with for him to try and beat Spence, but it’s not likely going to work out too well for him if he tries to punch it out like he did against Easter Jr. If Garcia goes into the teeth of Spence’s offense, he’s going to get chewed to pieces by the bigger, stronger fighter. That’s likely going to be the final outcome even if Mikey elects to run from Spence, which he probably won’t be able to do. If Mikey has any real weakness in his game, it’s his slow movement around the ring. Garcia does not move well at all, and that’s a part of his game that he’s never had to develop because he’s always been the bigger puncher in his fights. Unfortunately for Mikey, he’s going to be under-equipped when he gets inside the ring with Spence. Without the ability to move, Mikey is going to be a sitting duck against Spence.

For a lot of boxing fans that dislike Garcia, they’re really looking forward to watching him get obliterated by Spence. They can’t wait to see Garcia lose badly to Spence by knockout. Some of the dislike for Mikey rivals the dislike that boxing fans had for Floyd Mayweather Jr. Many fans would purse Mayweather’s fights just to see him lose, but he never did. Mayweather was too clever with the opposition that he would face. He always took the fights that he could win with a high degree of certainty. In Mikey’s case, he’s not facing a guy that he has a good chance of beating in Spence. It’s going to require the perfect game plan for Garcia to avoid getting beaten up by Spence. For a small fighter like the 5’6” Garcia, there might not be a game plan that he can use that would enable him to beat a fighter like Spence. If Mikey runs from Spence, he’s going to get tracked down and stopped. If he stands and slugs with Spence, Garcia will be ground up and spit out within four or five rounds. If Mikey fouls constantly, he’ll be at risk of being disqualified. Mikey won’t beat Spence by tying him up for 12 rounds to keep him from getting his shots off.

“I’m definitely licking my chops. I’m excited. I can box him, I can walk him down,” Mikey said. ”I feel I’m the stronger, better fighter — period. This is the first guy calling me out. He’s definitely serious about it. It gets me pumped up that he’s calling me out.”

Spence wants to fight WBA Super World welterweight champion Keith Thurman, but he’s out of action right now with an injury. When Thurman does return to the ring, he plans on taking a tune-up fight. Spence also wants to face the winner of the September 8 fight between Shawn Porter and Danny Garcia. Garcia-Porter is fighting for the vacant World Boxing Council welterweight title.

When Garcia talks of the Spence fight, it almost sounds like a pipe dream when he explains how he’s going to try and win the fight. It sounds so unbelievable that it’s somewhat sad, because Mikey seems to be heading up the creek without a paddle.

“I can try to use speed, angles, footwork,” Garcia said. “There’s a lot of things I can use to overcome that height, that reach, the southpaw [stance], the strength, all that. I’m prepared to do what it takes to win that fight.”

I think we’ve already established that Mikey lacks the footwork to keep Spence from walking him down and bludgeoning him into submission. Movement is probably the only thing that Mikey can try to use to keep from getting knocked out by Spence, but it’s something that he’s not used in the past in his fights. Using angles against Spence isn’t going to be enough for Mikey to get the victory. He’s going to need to be able to stand and fight Spence, because he’s not going to be able to win by using tricks. Spence has the longer reach, so Mikey won’t win if he stays on the outside and tries to jab his way to victory. His foot speed is too slow for him to beat Spence by coming at him at angles to deliver his shots.