Easter Jr. says Spence on another level than Mikey Garcia 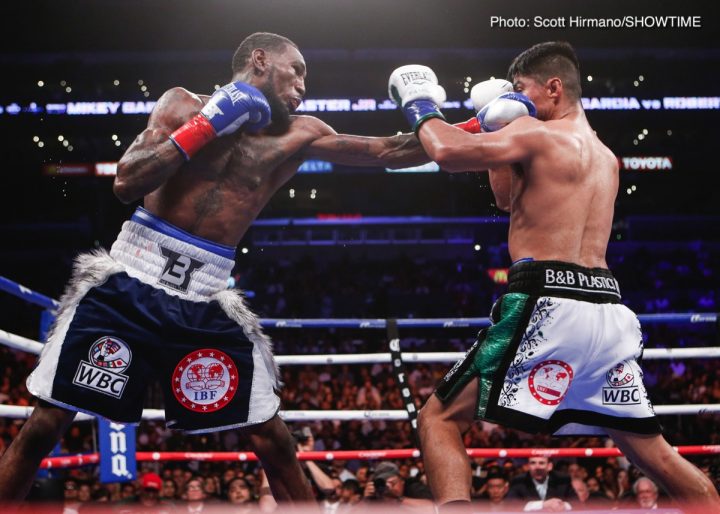 By Dan Ambrose: Robert Easter Jr. thinks welterweight champion Errol Spence Jr. is a beast and too much for lightweight champion Mikey Garcia to deal with if he carries out his dream of moving up to 147 to challenge him for his IBF title.

Easter (21-1, 14 KOs) lost a competitive 12 round unanimous decision to Garcia (39-0, 30 KOs) in a unification fight last Saturday night at the Staples Center in Los Angeles, California. Garcia, 30, had his WBC lightweight title on the line and Easter had his IBF strap up for grabs.

Garcia beat Easter by the scores 118-109, 117-110 and 116-111. Mikey dropped Easter Jr. in the 3rd round, but it was a flash knockdown. Easter wasn’t hurt. He bounced back up and continued to nail the shorter 5’6” Garcia with jabs the entire fight. It was a good victory for Garcia, but hardly the one-sided fight that one would think that would be needed for him to be considered as talented enough to move up two weight classes to defeated IBF welterweight champion Spence in 2018.

It would be a big deal certainly for Garcia to defeat Spence to win his 5th division world title, but it’s pretty farfetched. Mikey has won world titles at 126, 130, 135 and 140. However, Mikey didn’t beat some of the talents that rule those divisions nowadays. Mikey didn’t have to face Oscar Valdez, Vasyl Lomachenko, Gervonta Davis, Gary Russell Jr. or Regis Prograis. Could Mikey beat those guys? I don’t know. I have doubts. It would be better for Mikey to at least move to 140 and take on the perceived best fighter in the weight class in Regis Prograis (22-0, 19 KOs). It would be better for Garcia to show that he can beat Prograis before he takes on a fighter like Spence.

Not satisfied with being the new IBF/WBA 135-pound champion Garcia wants to move up to welterweight now to challenge Spence for his IBF to try and capture an incredible fifth division world title. While other fighters have done as much and more in winning number division titles, they didn’t have to face a wrecking machine like Spence to win their titles. Manny Pacquiao captured eight division world titles, and Oscar De La Hoya won six. However, neither of them had to fight Spence. If they did, there’s a very good chance they would have been beaten soundly. Spence is an incredible talent and he looks unbeatable at this time. A small fighter like the 5’6” Mikey won’t have much of a chance against a knockout artist like Spence. Mikey figures to be little more than a speed bump for Spence.

“Mikey’s a true champion and a warrior, but Errol Spence is a different breed,” Easter said after the fight. “He’s an animal, man.”

Easter Jr. isn’t pumping up Spence because he’s got sour grapes about losing to Mikey. Easter just sees Spence as the better fighter, and the much bigger, stronger fighter. Mikey couldn’t dent the chin of light welterweights Adrien Broner and Sergey Lipinets when he went up to light welterweight to face them. Those guys would be totally over-matched against Spence. Those are both guys that Spence would likely knockout with relative ease. The fact that Mikey couldn’t knock either of them out is a bad news when it comes to predicting what his chances would be against a puncher like Spence.

It’s unclear what Mikey’s ultimate goal is in facing Spence at welterweight. Is he thinking of moving up because he truly believes he can beat Spence or is this a self-serving decision to try and get interest in his

career by taking on arguably the best fighter in the 147 pound division so that he can get attention on himself. Former Golden Boy Promotions boss Richard Schaefer believes that Spence vs. Mikey Garcia is a pay-per-view worthy match.

There’s nothing preventing the Garcia vs. Spence fight from taking place in December, which is when Errol says he’ll be fighting next. Both guys are with the same manager Al Haymon, and both fight on Showtime. There is no network or promotional issues that can keep Spence from defending against Garcia in 2018. Spence went to the Garcia-Easter fight last night to scout out Garcia and to obviously get attention on himself to get a head start in marketing the Spence-Garcia fight. Spence has no reservations about facing Garcia. Spence isn’t ducking the fight. He wants it, and he doesn’t have a promoter that is standing in his way trying not to make the fight happen like we’re seeing between heavyweight champions Anthony Joshua and Deontay Wilder. Negotiating the Spence vs. Garcia fight likely won’t be too difficult.

“Mikey and Errol Spence both want to have the fight, they have the same adviser, so we’ll see if it can be put together,” Schaefer said via ESPN. ”I think this is going to be a big, big pay-per-view. We’re going to do a big number.”

It’ll be interesting to see how many PPV buys a fight between Spence and Garcia brings in on Showtime PPV. It might not bring in a lot, as neither of these guys are PPV as of yet. Garcia wants to make the leap to PPV, and the best way for him to accomplish that goal is to move up to 147 and beat Spence and the other top guys like Danny Garcia, Shawn Porter, Keith ‘One Time’ Thurman and Manny Pacquiao. Garcia is 30-years-old, and considered to be in the prime of his career. However, he’d be small for the welterweight division, and he lacks the punching power to dominate in that weight class like he’s done in other divisions. It’s quite likely that Mikey will suffer the same fate that Lamont Peterson did in moving up to welterweight and finding out quickly that he lacks the power to beat the top dogs at 147.

“There’s only a select few who have accomplished that feat,” Garcia said at post-fight press conference about fighters that have moved up to welterweight from the lower weight classes to capture a world title. “I’m here in search of that. I’m not just trying to pick up a belt against a nobody. I’m going after the best fighter (Spence), the most dangerous man at welterweight. I’m trying to get that because that’s what will cement my name. No one else is doing that right now. There’s no other fighter on the planet that’s doing what I’m doing.”

Mikey should say that there’s no one else on the planet is trying to do what he’s about to attempt in potentially moving up two weight classes to take on Spence a 147. Some boxing fans believe that WBA lightweight champion Vasyl Lomachenko could move up two weight classes to beat Spence a welterweight. But this is something that Lomachenko will likely never try and do though, as he seems reluctant to take major risks with his career. For example, Lomachenko wants WBA ‘regular’ welterweight champion Manny Pacquiao to move down two weight divisions to face him at lightweight rather than moving up to 147 to face him in his own weight division. Mikey at least is willing to take a risk with his career that other lightweights aren’t willing to do at the moment, but that doesn’t mean he’s going to be successful against Spence.