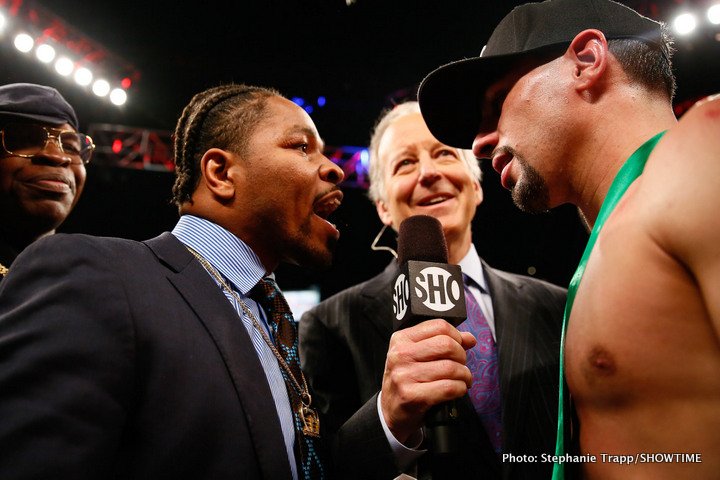 By Allen Fox: In a big fight card, former world champions Danny Garcia and Shawn Porter will be fighting each other in the main event on September 8 on Showtime Boxing at the Barclays Center in Brooklyn, New York. In the undercard, former IBF heavyweight champion Charles Martin (25-1-1, 23 KOs) will be facing unbeaten #9 WBC Adam Kowacki (17-0, 14 KOs).

The card still isn’t finalized as of yet, according to RingTV. Martin-Kownacki will be a fun fight. Kownacki can punch, but he hasn’t faced anyone good as of yet. Martin, 6’5”, is still trying to rebuild his career after losing to Anthony Joshua by a 2nd round knockout in 2016 in London, England. Martin came to England to defend his title against Joshua, and he was immediately blown out in two rounds. Martin has since won his last two fights in beating journeymen Byron Polley and Michael Marrone.

Garcia vs. Porter has the makings of an ugly contest with a lot of low blows, shoving and head-butts. Garcia has a history of throwing low blows in his fights, so he’ll be dangerous for Porter. The head-butts from Porter could make it tough on Garcia to win the fight if he’s unable to slip out of range of Porter’s head clashes.

The carefully guided former WBC 140 & 147 pound champion Garcia (34-1, 20 KOs) will be facing former IBF welterweight belt holder Porter (28-2-1, 17 KOs) for the vacant World Boxing Council welterweight title that was recently given up by Keith ‘One Time’ Thurman, who already beat them both. They were hoping to get a rematch with Thurman, but he’s been out of commission since defeating Garcia last year in March 2017. The winner of the Garcia vs. Porter could be facing IBF welterweight champion Errol ‘The Truth’ Spence next year. Both fighters have expressed interest in facing Spence, but whether they do face him remains to be seen. Garcia has been carefully matched during his career, and it’s unlikely he’ll take the fight against Spence when push comes to shove. It would be a good career move for Garcia to face Spence, but it would likely end badly for him.

Garcia was supposed to face Porter on August 25, but the date of the fight was moved to September 8. It’s still not finalized yet, but it’s expected to be soon.

Porter earned the WBC mandatory spot by beating Andre Berto by a 9th round knockout in April 2017. Last November, Porter struggled to beat Adrian Granados by a 12 round unanimous decision at the Barclays Center in Brooklyn, New York. Porter, 30, suffered a hand injury in the fight. Porter got the win, but it was far from easy.

Garcia bounced back from his loss to Thurman last year to defeat former WBA lightweight belt holder Brandon Rios by a 9th round knockout last February. Garcia wore the inactive Rios down and stopped him with a single right hand in round 9. Garcia’s face was marked up by the punches from Rios. It was not the easy fight that many boxing fans had thought it would be for Garcia. Rios got his pound of flesh in the process of losing the fight. It was a good thing for Garcia that Rios wasn’t in his prime, because he might have lost it.

Garcia had problems with Thurman last year. The hand speed and power that Thurman had going for him made the fight one-sided in the first six rounds. Thurman stopped attacking Garcia in the second half of the fight after suffering an elbow injury. Garcia then came on and made it close in losing a 12 round split decision. In Garcia’s best win of his career, he defeated Lucas Matthysse by a 12 round decision in 2013. The fight was filled with low blows by Garcia.