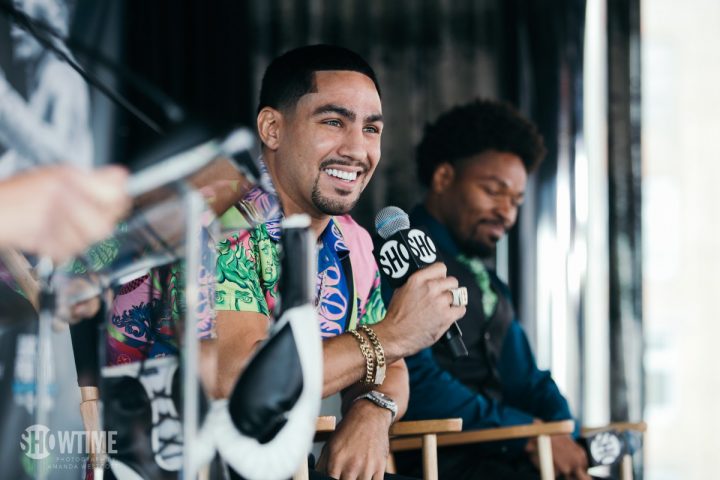 By Scott Gilfoid: Danny Garcia says his asking price for a rematch against Amir Khan is $10 million, and he says his promoter Eddie Hearn will need to come up with the cash if he wants him to come to the UK for it to happen.

Garcia (34-1, 20 KOs) knocked out Khan in the 4th round six years ago on July 14, 2012 in Las Vegas, Nevada. Since that fight, Garcia has posted a 10-1 record with his only defeat coming at the hands of WBA Super World welterweight champion Keith ‘One Time’ Thurman last year in losing a 12 round split decision on March 4.

If Hearn wants Danny Garcia for his DAZN fights in the U.S, he might give him a big wad of cash to fight Khan. Hearn will need to give Garcia a ton of money though for him to be lured into fighting on DAZN against Khan. It’s more likely that Hearn would offer Garcia $2.5 million flat fee for a fight against Khan, and he would need to take it or leave it. Hearn’s tough negotiating tactics would likely see him royally bungle the Garcia vs. Khan 2 rematch talks. I doubt that Hearn would be too broken up about not getting a rematch between those two made, because it seems like the only fight he really wants to make is a Khan vs. Brook fight.

It would be a tough sell for Hearn to push a Khan-Garcia rematch. The first fight was one-sided. For the hardcore boxing fans that remember their fight in 2012, they won’t be excited at seeing Khan and Garcia fight a second time. Garcia beat Khan in a conclusive fashion leaving no doubts who the better fighter is of the two. Garcia isn’t viewed as the best or even the third best fighter in the welterweight division. Khan gains nothing from fighting him a second time.

Garcia, 30, will be waiting a long time for Hearn to give him $10 million for a rematch against Khan. A second Khan vs. Garcia fight likely wouldn’t make huge money in the UK because there isn’t much demand for that match. The British boxing fans want to see Khan fight former IBF welterweight champion Kell Brook, and Hearn plans on giving what they want. Khan seems to be resistant to that idea, however. Khan prefers facing WBA World welterweight champion Manny Pacquiao (60-7-2, 39 KOs). For that fight to happen, Hearn says Khan will likely need to dip into his own pocket to get the money that Pacquiao will want to give the green light to it. Hearn believes Khan can make more money fighting Brook than he can fighting Pacquiao.

Garcia says he’d like to face Pacquiao as well. For a fight between Garcia and Pacquiao to take place, Danny will need to defeat Shawn Porter (28-2-1, 17 KOs) in their fight on September 8 at the Barclays Center in Brooklyn, New York. Garcia-Porter will be televised on Showtime Boxing. The two fighters will be squaring off for the vacant WBC welterweight title.

”That would be a big fight, but that’s about getting made thought. That’s the hardest part about that,” Garcia said about a fight against Manny Pacquiao. ”If the money’s right, Manny Pacquiao is Manny Pacquiao, so he might try and give me whatever I want.”

Pacquiao, 39, might be interested in facing Garcia if he beats Porter to pick up the WBC 147 pound title. If Porter wins the WBC title, then Pacquiao will likely target him for a unification fight. Facing the winner of the Garcia vs. Porter fight gives Pacquiao a good shot at capturing a welterweight title. Pacquiao likely won’t take a fight against IBF champion Errol Spence Jr. or WBO champion Terence Crawford, because those guys are bad style match-ups for Pacquiao. Porter would be a tough fight for Pacquiao as well due to his habit of roughing up his opponents. Pacquiao was roughed up by Jeff Horn and beaten last year. If Porter gets a chance to fight Pacquiao, he’ll surely try and follow the blueprint created by Horn.