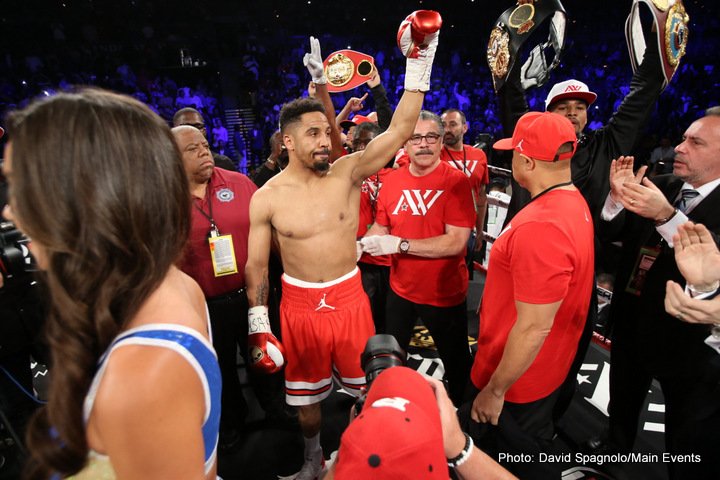 By Allan Fox: In what could be a sign of a pending comeback, former two division world champion Andre ‘SOG’ Ward posted photos of him sparring on his social media site on Friday, saying ”Boxing, I miss you.” If Ward, 34, was to launch a comeback in 2018, he would figure to be in the mix for a clash with the popular British fighter Tony Bellew (30-2-1, 20 KOs).

Ward previously said that if he were to make a comeback, he’d do it for his boxing lesson. The guy for Ward to beat right now to cement is legacy is Aleksandr Usyk. If Ward comes back to fight Bellew, it would be more of a money fight and not a legacy building site, as Bellew isn’t considered the best fighter in the cruiserweight division or even the second best. He’s just a popular fighter and little more.

For Ward to have a chance of getting a big money fight against Bellew this year, he’ll need to make a news announcement soon. Bellew’s promoter Eddie Hearn says he’s already reached out to the management of IBF/WBA/WBC/WBO cruiserweight champion Aleksandr Usyk (15-0, 11 KOs) to try and put a fight together for November. It seems that the wheels are set in motion for Bellew to take the fight with the 31-year-old Usyk. Ward can always fight the winner of that fight. Unfortunately, Ward likely won’t make a ton of money fighting Usyk, who has a great chance of defeating Bellew. The money fight for Ward would be against Bellew, but the only way that fight happens if he can get him to agree to face him instead of Usyk. Bellew has already said that he plans on retiring after the Usyk fight, because he believes it’ll be a punishing fight for him and he doesn’t want to continue his career afterwards.

Ward would have a good chance of capturing the cruiserweight belts after Usyk vacates them and moves up to heavyweight. It’s probably not a good idea for Ward to try and face Usyk for those titles, as he’s so much bigger, stronger and more mobile. Ward beat light heavyweight champion Sergey Kovlaev in his last two fights, but the matches were both dirty and filled with controversy. Kovalev deserved to win his first fight with Ward in 2016. The judges gave it to Ward by an unpopular 12 round unanimous decision. In 2017, Ward stopped Kovalev in the 8th round after appearing to hit him three times with low blows. The way that Ward struggled to beat Kovalev twice suggests that he won’t be able to handle a fighter like Usyk. However, if Usyk gives up the cruiserweight belts, Ward would have an excellent chance of defeating the likes of Mairis Briedis, Murat Gassiev and Yunier Dorticos to win one of the titles. Unfortunately for Ward, all the cruiserweight titles won’t be on the line unless he can line up a fight against Usyk before he vacates them. That would be tough fight for Ward though, as he’s not as mobile as he used to be, and it’s unlikely that he would be able to mug Usyk like he did against Kovalev in their first fight.