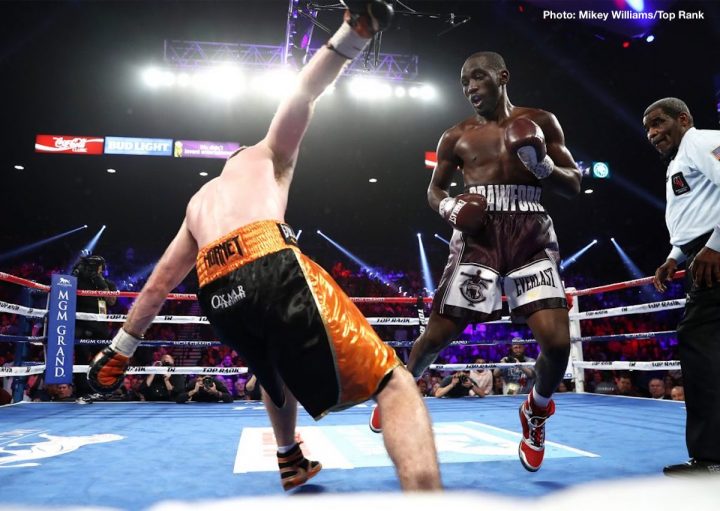 By Allan Fox: Terence Crawford says he’s eventually going to face IBF welterweight champion Errol Spence Jr. in the future, but for now he wants to let the fight marinate to make it bigger before the two of them eventually face each other. Right now, neither of them have the fan base to make a fight between them a pay-per-view contest.

Crawford (34-0, 23 KOs) is further hampered in that he’s not been matched tough during his career by his promoters at Top Rank, and there’s very little chance given the politics of boxing that he’s going to be put in with any of the notable welterweights like Danny Garcia, Amir Khan, Shawn Porter and Errol Spence Jr.

“In the future, it will happen,” Terence said to TMZ.com. “But right now, you know, we’ve got other fights until that one gets bigger.”

It might be better for Crawford to let the fight with Spence marinate for as long as possible before Top Rank makes it because right now he doesn’t look nearly ready to take the fight with the 28-year-old Spence. Crawford lacks the punching power and the size to beat Spence, but there’s a chance that he could grow into the division over time.

I doubt that’ll happen though, as Crawford is 30-years-old, and has likely finished growing and isn’t going to get more powerful. One of these days, Crawford vs. Spence will be pay-per-view worthy, but not right now. The two of them need to do more before they face each other in a big money fight. If the fight gets made right now, Spence likely destroys Crawford and that would hurt the Nebraska native’s popularity for a long time to come.

In the next four months, Crawford will be defending his World Boxing Organization welterweight title for the first time. His promoter Bob Arum plans on having Crawford defend against either Jose Benavidez or WBA World welterweight champion Lucas Matthysse. The only way Crawford faces Matthysse is if his title defense against Manny Pacquiao fails to take place due to the lack of finances.

Benavidez is the more likely opponent for Crawford to face, as he’s with Top Rank and he doesn’t have a lot of options available to him. The fans aren’t calling for Crawford and Benavidez to face each other, but Top Rank promoter Arum will probably make the fight anyway because he likes to make in house fights involving his fighters. I don’t see the fight increasing the value of either fighter. Benavidez ill lose badly, so he’ll come out of the contest in bad shape in terms of his popularity. Crawford won’t gain anything because he’ll be facing another over-matched no name.