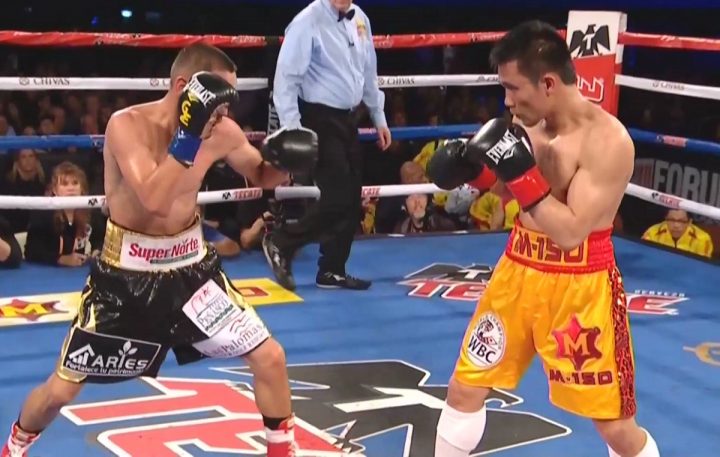 By Jeff Aranow: WBC super flyweight champion Srisaket Sor Rungvisai (45-4-1, 40 KOs) will be taking a stay busy non-title fight against Korean journeyman Young Gil Bae (28-6-2, 22 KOs) on July 21 in a 10 round contest at the Workpoint Studio in Bang Phun, Thailand.

If Rungvisai doesn’t carry Bae, this fight will be over with quickly. This is a terrible mismatch.

This is a very disappointing fight for the 31-year-old Rungvisai to be taking, as he’s a top 10 pound-for-pound fighter, and he shouldn’t have to take C-level opposition in non-title fights at this point in his career. As the World Boxing Council 115 pound champion, Rungvisai should at least be fighting fringe contenders in order to give the contenders a chance to fight for a world title rather than facing non-top 10 guys like Young Gil Bae.

If the WBC is on board with Rungvisai taking stay busy fights while holding their WBC super flyweight title, then there’s nothing that can be done about it. This isn’t the first time that Rungvisai has taken stay busy fights. Before Rungvisai’s first fight against Roman ‘Chocolatito’ Gonzalez in 2017, he fought three consecutive fights against opposition that were making their pro debuts in 2016. In other words, these fighters had 0-0 records. You don’t see that from top fighters in the U.S or other countries.

Once they’ve become highly ranked by the sanctioning bodies, they shy away from fighting poor opposition as much as possible because it doesn’t help increase their ratings, popularity and improve their game. For Rungvisai, he’s been doing this for much of his career. Even before his three fights against fighters making their pro debut in 2016, Rungvisai fought four consecutive journeyman level opponents during 2015. For two consecutive years in 2015 and 2016, Rungvisai fought non-contenders. It’s surprising that a top level fighter would throw away two years of his career by facing guys that had no business fighting him.

Rungvisai defeated Roman Gonzalez twice in 2017, and then edged former flyweight champion Juan Francisco Estrada by a 12 round majority decision last February. It was good that Rungvisai fought two highly rated fighters in Chocolatito and Estrada in three straight fights, but it’s bad that he’s now going back to fighting journeyman level opposition. It’s unclear whether HBO is going to be willing to televise Rungvisai’s mismatch against Bae on July 21, as it’s not a quality match-up on paper. It could make for bad television if Rungivai blows through Bae in one round.

Bae was recently knocked out by Rex Tso and WBC World minimumweight champion Chayaphon Monsri (50-0, 18 KOs). Like Rungvisai, the 32-year-old Monsri is also from Thailand, but his record is largely padded with wins over poor opposition.