Saunders says he’s too clever to box Murray while injured, then calls him out for street fight 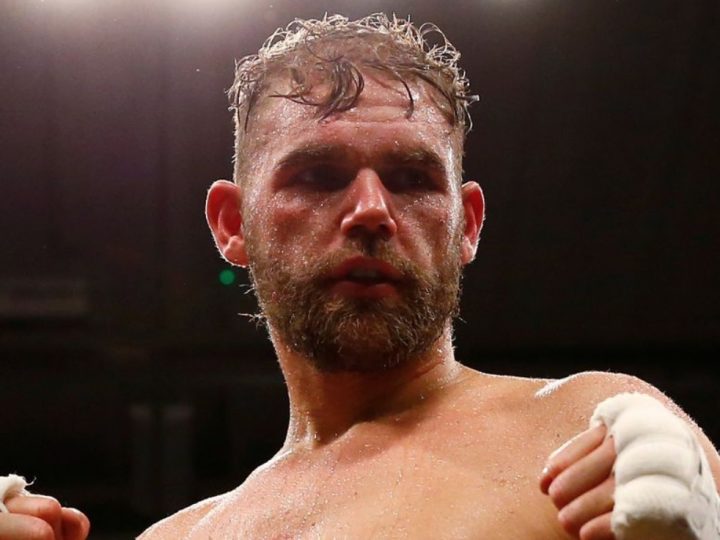 By Scott Gilfoid: A day after pulling out of his June 23 fight against Martin Murray, the Injured WBO middleweight champion Billy Joe Saunders said today on Instagram that he’s “too clever” to fight with an injury.

What’s interesting is that Saunders also said that he will layout Murray if he gets in his face next Saturday night and calls him s—t house like he did on Instagram last Sunday. If Saunders isn’t willing to fight Murray in the ring, then why is he going on about being willing to fight him on the street? I’m just saying. It doesn’t make sense. If Murray’s isn’t willing to fight Murray inside the ring, then why talk of fighting him in a fist-fight? Isn’t that just as risky? One cut and Saunders could be out of commission for many months, and that would probably mean he would have no chance of fighting IBF/IBO/WBA/WBC middleweight champion Gennady Golovkin or Saul Canelo Alvarez in September.

With all the many boxing fans that believe Saunders is faking his latest injury, it’s not a good look on his part to be calling Murray out for a street fight. I mean, if Saunders is injured, shouldn’t he be taking it easy instead of daring Murray to get in his face on Saturday?

“This is aimed at you, Martin Murray. You say I’m a s—t house on Instagram? You’re a bum. You a tick-over fight for me. You was never dangerous. But I can understand your frustration because you wanted your paycheck before you give up and retire. But there is this, Martin Murray. If I’m a s—t house, I’ll be here in Manchester on Saturday. Walk that to my face and say that to my face and I will lay you out on the floor cold. That’s what will happen to you.”

So, there it is. Saunders is too clever to box Murray inside the ring, but he’s willing to fight him on the street if he walks up to him and calls him a s—t house. I wonder if Saunders thinks these things through before he starts blabbering on Instagram. Saunders doesn’t want to fight Murray inside the ring due to the risk involved, but he’s willing to fight him outside of the ring? I wonder what would happen if Murray took Saunders up on his offer and trash talks him to his face next Saturday. Will Saunders be a clever businessman of will he start going at it right there, risking further injury and possibly being sidelined for the remainder of 2018?

Murray thinks Saunders pulled of their fight because he’s afraid. Whatever the case, Murray is losing thousands by Saunders pulling out of the fight. As you would expect, Saunders angered Murray (36-4-1, 17 KOs) by pulling out of their scheduled June 23 fight at the O2 Arena in London, England. Unfortunate, this wasn’t the first time that Saunders pulled out of a fight with Murray. Saunders (26-0, 12 Kos) suffered a hand injury that led to his April 14th fight against Murray being postponed until June 23. In that case, the fight was rescheduled. As of now, it appears that Saunders will be moving on and not rescheduling the Murray fight.

Well, I don’t know about Saunders being willing to fight anybody. He still hasn’t fought Jermall Charlo or Danny Jacobs. Saunders said that he would need $6 million to fight Jacobs. That sounds to me like Saunders doesn’t fancy the fight. Charlo sees Saunders as a “complete trash of a fighter” and says nothing stands out about him other than “he knows how to run.” I mean, why isn’t Saunders threatening Charlo to lay him out cold outside of the ring? It seems to me what Charlo said about Saunders being a “complete trash of a fighter” is far worse than being called a s—t house by Murray. I get the feeling that Saunders sees Murray as a non-threat to him, so he’s willing to talk boldly, but Charlo is a different story. He’s someone that would be very, very dangerous inside and especially outside the ring. But as far as Saunders being willing to fight anybody, I don’t buy that at all. If Saunders was willing to fight anybody, he would have already fought Jacobs, Charlo, Gennady Golovkin and Saul Canelo Alvarez. You can argue that Saunders has been matched in a clever manner during his career. His toughest fights have come against these guys: Andy Lee, David Lemieux and Chris Eubank Jr. In other words, Saunders has been matched against B-level fighters and not the guys from the A-list, like GGG, Canelo, Charlo, Danny Jacobs and Sergiy Derevyanchenko.

”The reason you are where you are and I am where I am is I’m a clever business man,” Saunders said in his rambling Instagram post on Monday. ”When it comes to things like this, you’re nothing but a bum who takes chances in desperate needs. I’ve got no need to do that.”

If Saunders believes that the 35-year-old Murray is a “bum,” then why in the world did he want to fight him in the first place? If Murray is a bum, then Saunders shouldn’t have agreed to schedule the fight against him. Saunders should have fought somebody else, right? Charlo and Jacobs would gladly fight Saunders, as would Demetrius Andrade and Derevyanchenko. If Saunders says those guys are bums too, then he might as well retire, because nobody is good enough for him. Saunders shouldn’t be agreeing to fight guys that he feels are beneath him. Saunders had no choice with his last fight against David Lemieux, as hew as his World Boxing Organization mandatory challenger. Nevertheless, Saunders had a choice when it came to Murray. He didn’t have to fight him and he shouldn’t have bothered scheduling the fight if he felt so strongly that he’s nothing but a bum. It reflects badly on Saunders that he’s agreeing to fight guys that he feels are far beneath him in talent. You can’t say that Murray deserved a title shot, as he’d lost two out of his last six fights, and he was recently beat Gabriel Rosado by a controversial 12 round majority decision last year in April in Liverpool, England. A lot of boxing fans felt that Rosado should have won that fight. Why then did Saunders ever agree to fight Murray? Electing to fight Murray after all of those poor performances seems to suggest that Saunders’ success as a middleweight champion is based on his match-making more so than his talent. As such, you can agree that Saunders is a clever businessman, because he’s careful in the type of opponents that he faces as the WBO middleweight champion.

These are the fighters that Saunders has defended his WBO title against since winning it in December 2015:

Those are fringe level middleweight contenders at best, and definitely not high-rung contenders. If Murray’s name had been added to that list, it would have looked really bad, as if Saunders is milking his WBO title by facing only guys that he knows he can beat rather than contenders that would have a very good chance of beating him like Charlo, Jacobs and Derevyanchenko.

”Martin Murray been beaten 10 times and you’re a nobody, mate,” Saunders said. ”You’re an absolute nobody. I’m sorry to get you off your high horse because you got announced to fight for a world title and you’re not doing it now because the reason the big [Saunders] got injured and he’s not going to take no silly risks. So, stay on your track and I’ll stay on mine. You don’t take chances at the business end with millions and millions of pounds at stake. You don’t do that. So, I’m sure if the shoe was on the other foot, you’d have done the same. But let’s get one thing clear, it’s most definitely not because I’m scared of Martin Murray. Because like I said, if I’m scared of you Martin Murray, I’ll be at Tyson Fury’s fight on Saturday. Some to my face and say it and you will see what happens to you,” Saunders said.

So, Saunders is willing to have a fist fight with Murray, but not a fight inside the ring? It doesn’t make sense. The part where Saunders tells Murray to “stay on your track and I’ll stay on mine,” lets the boxing fans know that the Saunders-Murray fight won’t be rescheduled this time. This just reinforces what Murray said on Sunday about the reason behind Saunders pulling out of the fight is so he can get a big payday fighting Gennady Golovkin or Saul Canelo Alvarez.

Here’s what Murray said about why he believes Saunders pulled out of the fight:

“We know that he’s just trying to make a big money fight with Golovkin or Canelo and I’m too risky to fight. He just doesn’t want to fight me.”

Terence Crawford vs. Jeff Horn this Saturday on ESPN »