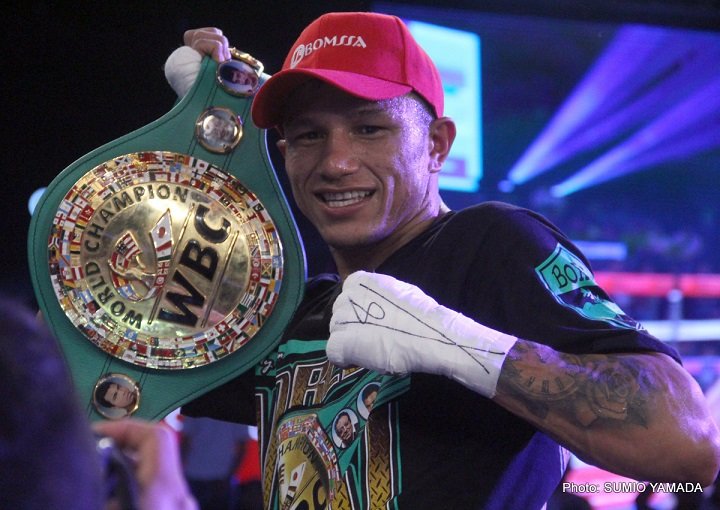 The 26-year-old Berchelt knocked the hapless 34-year-old Barros down in the 3rd round. Moments later, Barro’s trainer stepped into the ring to have the fight stopped to prevent their fighter from sustaining any unnecessary punishment. It was a good move on their part because Barros would have been knocked down again had the fight gone on a little longer. The official time of the stoppage was at 1:53 of round three. Like a true warrior, Barros wanted to continue fighting, but he was in no condition to keep fighting. He was hurt and had never been competitive during the short three rounds of the contest

In the 2nd round, Berchelt dropped Barros with a left to the head. Barros got to his feet but continued to take heavy shots from Berchelt.

NEWS:   Ryan Garcia returning to the ring in October in Los Angeles

The win for Berchelt was his third successful title defense of his WBC 130 lb. title that he won last year in an 11th round KO victory over WBC super featherweight champion Francisco Vargas in January 2017.

The contenders work hard to get ranked at super featherweight, but then are passed over by champions like Berchelt, who instead chooses to face a lower rated fringe contender from the 126 lb. weight class. This is something that needs to be changed in the sport of boxing to make it fairer to the contenders waiting for their hard-earned title shot. When the sanctioning bodies allow champions to comb the weight classes below their division, it arguably allows them to keep their titles longer than they otherwise would. It gives them an unfair advantage by being bigger than their opponents in some cases.

Berchelt is now expected to face #1 WBC Miguel ‘Mickey’ Roman (60-12, 47 KOs) in his next defense of his WBC super featherweight title. Roman, 32, defeated Michel Marcano (17-1-1, 14 KOs) by a 2nd round knockout last Saturday night to stay in line for a world title shot against Berchelt.

“I felt strong, there was no way the Argentinean was beating me in front of my people in Yucatan,” Berchelt said via Fight News. “Now for Mickey Roman; you have to answer for everything you said. Get ready because I’m going to tear your head off. We’ll be ready to put you back into reality. You’re going to swallow every word you said about me. I will answer you with my fists and my crushing victory.”

In Berchelt’s three title defenses, he’s beaten Takashi Miura, Maxwell Awuku and Barros. The fights against Barros and Awuku were soft match-making for Berchelt. He had problems beating Miura in July of last year in winning a 12 round unanimous decision. Despite winning by a wide 12 round decision, Berchelt was staggered at one point in the fight and looked like he was on the verge of being knocked out by the Japanese fighter. The soft match-making by Berchelt’s management in his last two fights would suggest that his promoters want to make sure they limit the amount of punishment he takes in order to prolong his time as the WBC 130 lb. champion. It’s a smart move on their part, but not great for the boxing fans that are looking to see great fights. Feeding Berchelt a fringe contender from the 126 lb. weight division in Barros and a horribly over-matched Awuku was almost unfair.

There are some very good contenders in the super featherweight division that Berchelt could have fought last Saturday night instead of featherweight Barros. It would have been so much better if Berchelt had fought one of these guys: Jason Sosa, Robinson Castellanos, Rene Alvarado, Jhonny Gonzalez, Bryan Vazquez, Rafael Mensah, Christopher Diaz, Tevin Farmer or Ryan Garcia. Those are the fighters that Berchelt needs to be defending against instead of facing near bottom rated featherweights like Barros. The only way Berchelt is going to increase his popularity is by facing the most talented contenders and/or champions from the featherweight division instead of fighting weak opposition for all of his voluntary defenses. Berchelt won’t have any choice when he defends against Miguel ‘Mickey’ Roman, since he’s his WBC mandatory challenger and can’t be avoided. But there are a lot of other talented fighters that Berchelt could and should be fighting when making voluntary defenses of his WBC title. To be considered the best fighter in the super featherweight division, Berchelt needs to step it up and start facing the cream of the division rather than only doing it when he’s forced to by the World Boxing Council.

Roman has a four-fight winning streak going since losing to the hard hitting former WBC super featherweight champion Takashi Miura by a 12th round knockout last year in January 2017. Roman recently pulled off an upset in stopping the out of shape looking 39-year-old Orlando Salido in the 9th round last year. Salido looked nothing like the same fighter who’d beaten Vasyl Lomachenko and had been arguably robbed in fights against Francisco ‘El Bandido’ Vargas and Roman ‘Rocky’ Martinez. Salido showed brief flashes of the fighter he’d been a few years earlier. Had Salido been at his best, he likely would have knocked Roman out just as Miura had done.

In other boxing action on the card, super featherweight contender Ricardo Núñez (20-2, 18 KOs) defeated Elvis “Rocanrolero” Torres (19-1-2, 11 KOs) by a 1st round knockout. Nunez knocked Torres out with a body shot.

Barry McGuigan not sure whether Josh Taylor will enter WBSS tournament »